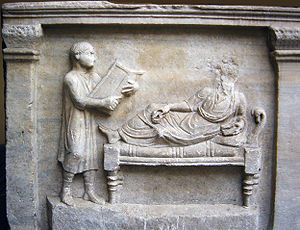 Detail from the sarcophagus of Roman jurist Valerio Petroniano (315–320 AD).

A jurist (a word coming from medieval Latin), also known as legal scholar or legal theorist, is someone who researches and studies jurisprudence (theory of law).[1] Such a person can work as an academic, legal writer or law lecturer. In the United Kingdom, Australia, New Zealand, South Africa, and in many other Commonwealth countries, the word jurist is sometimes used to refer to an illustrious barrister, whereas in the United States of America and Canada, to refer to an eminent judge.[2][3] Thus a jurist, someone who studies, analyses and comments on law,[4] stands in contrast with a lawyer, someone who applies law on behalf of clients and thinks about it in practical terms.[5]

Many legal scholars and authors have explained that a person may be both a lawyer and a jurist, but a jurist is not necessarily a lawyer, nor a lawyer necessarily a jurist. Both must possess an acquaintance with the term "law". The work of the jurist is the study, analysis and arrangement of the law — work which can be done wholly in the seclusion of the library. The work of the lawyer is the satisfaction of the wishes of particular human beings for legal assistance — work which requires dealing to some extent therefore with people in the office, in the court room, or in the market-place.

Any highly civilized society requires both lawyers and jurists, both philosophers and doers. As a mere matter of fact, there is a greater demand for doers than for philosophers, for lawyers than for jurists; but the number of persons which the interests of society require should engage in a particular occupation, has nothing to do with the question of the importance of the different kinds of work done by those persons. It is important however to note the fundamental difference between the work of the lawyer and that of the jurist.[6]

The term jurist has another sense, which is wider, synonymous with legal professional, i.e. anyone professionally involved with law and justice.[1] In some other European languages, a word resembling jurist (such as Italian giurista, German Juristen, Norwegian jurist, French juriste, Spanish and Portuguese jurista etc.) is used in this major sense.

In Sharia (Islamic law), jurists are known as Ulema, who specialize in Fiqh (Islamic jurisprudence).[7] In order to become an Islamic jurist, it is required for a student to receive an ijazat attadris wa 'l-ifa' ("license to teach and issue legal opinions"), equivalent to the Juris Doctor and Doctor of Laws qualifications,[8] from a Madrasah or Jami'ah, equivalent to a college and university respectively.[9] This system of legal education dates back to the 9th century, during the classical period of Islam.[8]

This is a sequential classification of some notable jurists.