On April 28, 1192, while the rivalry between Guy de Lusignan and Maria's father was about to find a term and Richard I of England was about to finish Third Crusade and return to England, Conrad was assassinated. Her mother remarried in haste on May 5 to Henry II, Count of Champagne, nephew of King Richard and Philip II of France. At the time of the wedding, Isabella was already visibly pregnant with Maria.[1] Maria, the posthumous child was born during the summer of 1192.

Henry II of Champagne died in 1197; from this marriage Maria had gained three half-sisters. Amalric II of Jerusalem (now known as Aimery of Jerusalem) married Isabella, he became joint ruler of Jerusalem with Isabella. He died on April 1, 1205.

Isabella died shortly thereafter and Maria became queen of Jerusalem, at the age of thirteen, while her stepbrother Hugh, from the first marriage of Aimery, became King of Cyprus and married Maria's half-sister, Alice of Champagne. The half-brother of her mother, John of Ibelin, the Old Lord of Beirut, acted as regent on behalf of Maria, wisely and to the satisfaction of the inhabitants of the kingdoms. Failing to conduct operations to reconquer the territories lost in 1187, he maintained the kingdom within its limits, a policy of peace with Al-Adil I, brother of Saladin, who had come to his estate by eliminating the other heirs.[2]

The regency expired in 1209, when Maria was seventeen, so the government believed it best for Maria to marry so she could secure her post as queen. The assembly of barons and prelates decided to seek advice from Philip II of France, who offered one of his followers, John of Brienne. However John was not a very rich man. To overcome his lack of fortune and to enable him to fund his sovereign obligations (court and army) King Philip and Pope Innocent III each paid him the sum of 40 000 livres.[3] 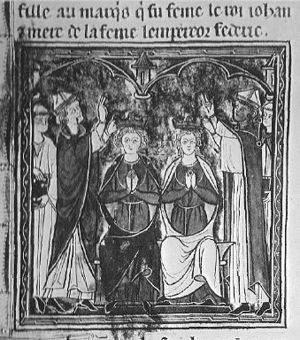 Coronation of Maria and John

The marriage was celebrated on September 4, 1210, then the couple were crowned King and Queen of Jerusalem on October 3, 1210 in Tyre Cathedral. John continued the peace policy of John of Ibelin. In 1212, Maria of Montferrat gave birth to a daughter

The lineage of Maria died out in 1268, with the death of her great-grand-grandson Conradin. After his death, the descendants of Maria's younger half-sister Alice of Champagne inherited her kingdom.