Tyre (Arabic: صور, Ṣūr; Phoenician: 𐤑𐤅𐤓, Ṣur; Hebrew: צוֹר, Tzor; Tiberian Hebrew צר, Ṣōr; Akkadian: 𒋗𒊒, Ṣurru; Greek: Τύρος, Týros; Turkish: Sur; Latin: Tyrus, Armenian Տիր [Dir]), sometimes romanized as Sour, is a city in the South Governorate of Lebanon. There were approximately 117,000 inhabitants in 2003.[1] However, the government of Lebanon has released only rough estimates of population numbers since 1932, so an accurate statistical accounting is not possible.[2] Tyre juts out from the coast of the Mediterranean and is located about 80 km (50 mi) south of Beirut. The name of the city means "rock"[3] after the rocky formation on which the town was originally built. The adjective for Tyre is Tyrian, and the inhabitants are Tyrians.

Tyre is an ancient Phoenician city and the legendary birthplace of Europa and Elissa (Dido). Today it is the fourth largest city in Lebanon[4] and houses one of the nation's major ports. Tourism is a major industry. The city has a number of ancient sites, including its Roman Hippodrome which was added to UNESCO's list of World Heritage Sites in 1979.[5][6] 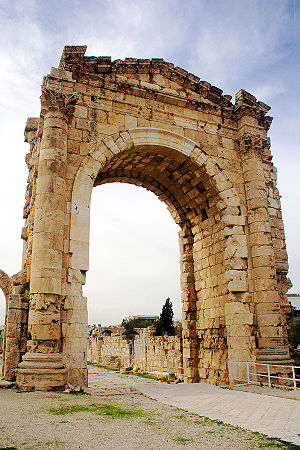 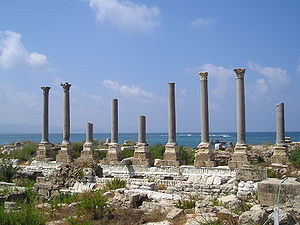 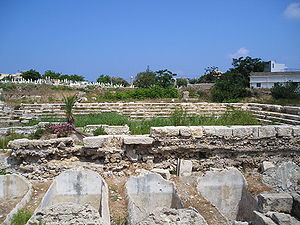 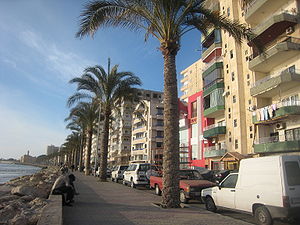 The modern south part of Tyre

Tyre originally consisted of two distinct urban centers, Tyre itself, which was on an island just off shore, and the associated settlement of Ushu on the adjacent mainland. Alexander the Great connected the island to the mainland by constructing a causeway during his siege of the city,[7] demolishing the old city to reuse its cut stone.[8]

In ancient times, the island city of Tyre was heavily fortified (with defensive walls 150 feet (46 m) high[10]) and the mainland settlement, originally called Ushu (later called Palaetyrus, meaning "Old Tyre," by the ancient Greeks) was actually more like a line of suburbs than any one city and was used primarily as a source of water and timber for the main island city.[11] Josephus records that the two fought against each other on occasion,[12] although most of the time they supported one another because they both benefited from the island city's wealth from maritime trade and the mainland area's source of timber, water and burial grounds.

Tyre was founded around 2750 BC according to Herodotus and was originally built as a walled city upon the mainland. Phoenicians from Tyre settled in houses around Memphis, south of the temple of Hephaestus in a district called the Tyrian Camp.[13][14] Tyre's name appears on monuments as early as 1300 BC. Philo of Byblos (in Eusebius) quotes the antiquarian authority Sanchuniathon as stating that it was first occupied by Hypsuranius. Sanchuniathon's work is said to be dedicated to "Abibalus king of Berytus"—possibly the Abibaal who was king of Tyre.[15]

There are ten Amarna letters dated 1350 BC from the mayor, Abimilku, written to Akenaten. The subject is often water, wood, and the Habiru overtaking the countryside of the mainland, and how it affected the island-city.

The commerce of the ancient world was gathered into the warehouses of Tyre. "Tyrian merchants were the first who ventured to navigate the Mediterranean waters; and they founded their colonies on the coasts and neighbouring islands of the Aegean Sea, in Greece, on the northern coast of Africa, at Carthage and other places, in Sicily and Corsica, in Spain at Tartessus, and even beyond the pillars of Hercules at Gadeira (Cádiz)".[16]

The city of Tyre was particularly known for the production of a rare and extraordinarily expensive sort of purple dye, produced from the murex shellfish, known as Tyrian purple. This color was, in many cultures of ancient times, reserved for the use of royalty, or at least nobility.[17]

Tyre was often attacked by Egypt, besieged by Shalmaneser V, who was assisted by the Phoenicians of the mainland, for five years. From 586 until 573 BC, the city was besieged by Nebuchadnezzar II until Tyre agreed to pay a tribute.[18]

In 539 BC the Achaemenids conquered the city, and kept it under their rule until 332 BC, when Alexander the Great laid siege to the city, conquered and razed it.[19]

In 315 BC, Alexander's former general Antigonus began his own siege of Tyre,[20] taking the city a year later.[21]

In 126 BC, Tyre regained its independence (from the Seleucids)[22] and was allowed to keep much of its independence, as a "civitas foederata",[23] when the area became a Roman province in 64 BC.[24] Tyre continued to maintain much of its commercial importance until the Christian era.

It is stated in the Bible that Jesus visited the region of Tyre and Sidon and healed a Gentile (Matthew 15:21; Mark 7:24) and from this region many came forth to hear him preaching (Mark 3:8; Gospel of Luke 6:17, Matthew 11:21–23). A congregation was founded here soon after the death of Saint Stephen, and Paul of Tarsus, on his return from his third missionary journey, spent a week in conversation with the disciples there. According to Irenaeus of Lyon in Adversus Haereses, the female companion of Simon Magus came from here.

After a first failed siege in 1111, it was captured by the Crusaders in 1124, becoming one of the most important cities of the Kingdom of Jerusalem. It was part of the royal domain, although there were also autonomous trading colonies there for the Italian merchant cities. The city was the site of the archbishop of Tyre, a suffragan of the Latin Patriarch of Jerusalem; its archbishops often acceded to the Patriarchate. The most notable of the Latin archbishops was the historian William of Tyre.

After the reconquest of Acre by Richard the Lionheart on July 12, 1191, the seat of the kingdom moved there, but coronations were held in Tyre. In the 13th century, Tyre was separated from the royal domain as a separate crusader lordship. In 1291, it was retaken by the Mameluks which then was followed by Ottoman rule before the modern state of Lebanon was declared in 1920. 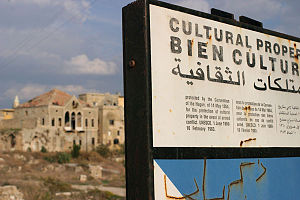 The present-day city of Tyre covers a large part of the original island and has expanded onto and covers most of the causeway, which had increased greatly in width over the centuries because of extensive silt depositions on either side. The part of the original island that is not covered by the modern city of Tyre consists mostly of an archaeological site showcasing remains of the city from ancient times.

Tyre was badly damaged in the late 1970s (Operation Litani) and early 1980s (1982 Lebanon War) during the war between Israel and the Palestine Liberation Organization (PLO). The city was used as a base by the PLO, and was nearly destroyed by Israeli artillery.[25] After the 1982 Lebanon War, the city was the site of an Israeli military post. In late 1982, and again in November 1983, buildings housing Israeli headquarters were destroyed by bombs, causing dozens of deaths in both cases and known in Israel as the First and Second Tyre Catastrophes. The 1983 explosion, by a suicide truck, happened only 10 days after similar car bombs exploded in the US Marines and French paratroop barracks in Beirut. Israel and the US blame Iran and Hezbollah for all explosions, but they have denied any involvement.

During the 2006 Israel-Lebanon conflict, several rocket-launching sites used by Hezbollah to counter the Israeli invasion were located in rural areas around the city.[26] At least one village near the city was bombed by Israel, as well as several sites within the city, causing civilian deaths and adding to the food shortage problem inside Tyre.[27] Israeli naval commandos also raided Hezbollah targets within the city.[28]

The Tyre Coast Nature Reserve covers over 380 hectares (940 acres) and divided into three zones: the Tourism zone (public beaches, the old city and Souks, the ancient port), the Agricultural and Archaeological zone, and the Conservation zone that includes the Phoenician springs of Ras El Ain. Due to its diverse flora and fauna, the reserve is a designated Ramsar Site. It is an important nesting site for migratory birds and the endangered Loggerhead and green sea turtle and the shelter of the Arabian spiny mouse and many other important creatures (including wall lizards, common pipistrelle, and european badger).[29][30] 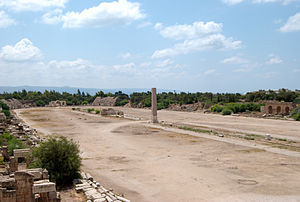 Threats to Tyre's ancient cultural heritage include development pressures and the illegal antiquities trade.[31] A highway, planned for 2011, is expected to be built in areas that some deem archaeologically-sensitive areas. A small-scale geophysical survey indicated the presence of archaeological remains at proposed construction sites. These sites have not been investigated. Despite the relocation of a proposed traffic interchange, the lack of precise site boundaries confuses the issue of site preservation.[32]

The hostilities of the 2006 Lebanon War put the ancient structures of Tyre at risk. This prompted UNESCO's Director-General to launch a "Heritage Alert" for the site.[33] Following the cessation of hostilities in September 2006, a visit by conservation experts to Lebanon observed no direct damage to the ancient city of Tyre. However, bombardment had damaged frescoes in a Roman funerary cave at the Tyre Necropolis. Additional site degradation was also noted, including “the lack of maintenance, the decay of exposed structures due to lack of rainwater regulation and the decay of porous and soft stones”.[32] Like many of the cities in the Levant and in Lebanon, the architecture since the civil war in the 1970s up till today is of poor quality and tends to threaten the cultural heritage in the built environment that predated the Lebanese civil war period.

In Ezekiel 26:17 the lament for Tyre recognises it as a city of renown.

Tyre is twinned with: