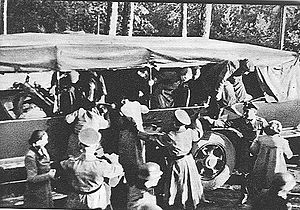 A picture taken by the Polish Underground of Nazi Secret Police rounding up Polish intelligentsia at Palmiry near Warsaw in 1940 for mass execution (German AB-Aktion in occupied Poland).

A war crime is an act that constitutes a serious violation of the law of war that gives rise to individual criminal responsibility.[1] Examples of war crimes include intentionally killing civilians or prisoners, torture, wantonly destroying property, taking hostages, perfidy, rape, using child soldiers, pillaging, declaring that no quarter will be given, and using weapons that cause superfluous injury or unnecessary suffering.[2]

The concept of war crimes began to emerge during the end of the 19th century and the beginning of the 20th century when the body of customary international law applicable to warfare between sovereign states was codified. Such codification occurred at the national level, such as with the publication of the Lieber Code in the United States, and at the international level with the adoption of the treaties during the Hague Conventions of 1899 and 1907. Moreover, trials in national courts during this period further helped clarify the law.[1] Following the end of World War II, major developments in the law occurred. Numerous trials of Axis war criminals established the Nuremberg principles, such as notion that war crimes constituted crimes defined by international law. Additionally, the Geneva Conventions in 1949 defined new war crimes and established that states could exercise universal jurisdiction over such crimes.[1] In the late 20th century and early 21st century, following the creation of several international courts, additional categories of war crimes applicable to armed conflicts other than those between states, such as civil wars.[1] The United States, Israel and Russia are the only OECD countries that do not accept war crime jurisdiction of the International Criminal Court (ICC) over its nationals, since they have not signed the Rome Statute.[3] 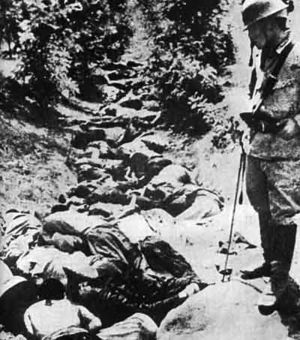 Suchow, China, 1938. A ditch full of the bodies of Chinese civilians, killed by Japanese soldiers.

The trial of Peter von Hagenbach by an ad hoc tribunal of the Holy Roman Empire in 1474, was the first "international" war crimes trial, and also of command responsibility.[4][5] He was convicted and beheaded for crimes that "he as a knight was deemed to have a duty to prevent", although he had argued that he was only "following orders".

In 1654 a Major Connaught (Royalist) was tried at Chester Assizes and hanged for his part in the massacre of villagers in the church at the village of Boughton, Cheshire in 1643. Twelve villagers were smoked out, stripped naked and had their throats cut. He was hanged at the scene of the crime having been convicted of striking a blow to the head of John Fowler with an axe.[6]

In 1865, Henry Wirz, a Confederate officer, was held accountable by a military tribunal and hanged for appalling conditions at Andersonville Prison where many Union POWs died during the American Civil War.

The Hague Conventions were international treaties negotiated at the First and Second Peace Conferences at The Hague, Netherlands, in 1899 and 1907, respectively, and were, along with the Geneva Conventions, among the first formal statements of the laws of war and war crimes in the nascent body of secular international law.

The Geneva Conventions are four related treaties adopted and continuously expanded from 1864 to 1949 that represent a legal basis and framework for the conduct of war under international law. Every single member state of the United Nations has currently ratified the conventions, which are universally accepted as customary international law, applicable to every situation of armed conflict in the world. However, the Additional Protocols to the Geneva Conventions adopted in 1977 containing the most pertinent, detailed and virulent protections of international humanitarian law for persons and objects in modern warfare are still not ratified by a number of States continuously engaged in armed conflicts, namely the United States, Israel, India, Pakistan, Iraq, Iran, and others. Accordingly, states retain different codes and values with regard to wartime conduct. Some signatories have routinely violated the Geneva Conventions in a way which either uses the ambiguities of law or political maneuvering to sidestep the laws' formalities and principles.

Three conventions were revised and expanded with the fourth one added in 1949:

Two Additional Protocols were adopted in 1977 with the third one added in 2005, completing and updating the Geneva Conventions:

A small number of German military personnel of the First World War were tried in 1921 by the German Supreme Court for alleged war crimes.

The modern concept of war crime was further developed under the auspices of the Nuremberg Trials based on the definition in the London Charter that was published on August 8, 1945. (Also see Nuremberg Principles.) Along with war crimes the charter also defined crimes against peace and crimes against humanity, which are often committed during wars and in concert with war crimes.

Also known as the Tokyo Trial, the Tokyo War Crimes Tribunal or simply as the Tribunal, it was convened on May 3, 1946 to try the leaders of the Empire of Japan for three types of crimes: "Class A" (crimes against peace), "Class B" (war crimes), and "Class C" (crimes against humanity), committed during World War II. 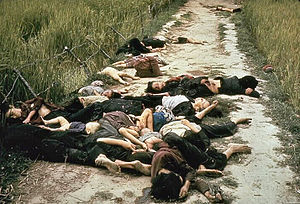 Bodies of some of the hundreds of Vietnamese villagers who were killed by U.S. soldiers during the My Lai Massacre.

On July 1, 2002, the International Criminal Court, a treaty-based court located in The Hague, came into being for the prosecution of war crimes committed on or after that date. Several nations, most notably the United States, China, Russia, and Israel, have criticized the court. The United States still participates as an observer. Article 12 of the Rome Statute provides jurisdiction over the citizens of non-contracting states in the event that they are accused of committing crimes in the territory of one of the state parties.[11]

War crimes are defined in the statute that established the International Criminal Court, which includes:

However the court only has jurisdiction over these crimes where they are "part of a plan or policy or as part of a large-scale commission of such crimes".[13]

Heads of state and government

To date, the present and former heads of state and heads of government that have been charged with war crimes include: 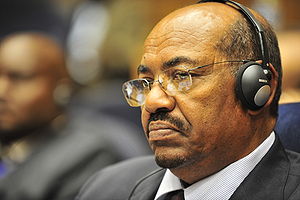 Sudanese President Omar al-Bashir, wanted by the ICC for war crimes and crimes against humanity. 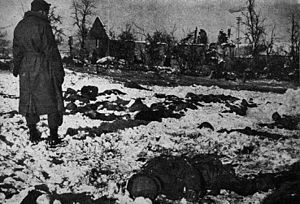 Aftermath of the Malmedy massacre (1944).

War crimes are serious violations of the rules of customary and treaty law concerning international humanitarian law that have become accepted as criminal offenses for which there is individual responsibility.[16] Colloquial definitions of war crime include violations of established protections of the laws of war, but also include failures to adhere to norms of procedure and rules of battle, such as attacking those displaying a peaceful flag of truce, or using that same flag as a ruse to mount an attack on enemy troops. The use of chemical and biological weapons in warfare are also prohibited by numerous chemical arms control agreements and the Biological Weapons Convention. Wearing enemy uniforms or civilian clothes to infiltrate enemy lines for espionage or sabotage missions is a legitimate ruse of war, though fighting in combat or assassinating individuals, even if they are military targets, behind enemy lines while so disguised is not, as it constitutes unlawful perfidy.[17][18][19][20] Attacking enemy troops while they are being deployed by way of a parachute is not a war crime.[21] However, Protocol I, Article 42 of the Geneva Conventions explicitly forbids attacking parachutists who eject from disabled aircraft and surrendering parachutists once landed.[22] Article 30 of the 1907 Hague Convention IV - The Laws and Customs of War on Land explicitly prohibits belligerents to punish enemy spies without previous trial.[23] War crimes include such acts as mistreatment of prisoners of war or civilians. In 2008, the U.N. Security Council adopted Resolution 1820, which noted that "rape and other forms of sexual violence can constitute war crimes, crimes against humanity or a constitutive act with respect to genocide"; see also war rape.[24] War crimes are sometimes part of instances of mass murder and genocide though these crimes are more broadly covered under international humanitarian law described as crimes against humanity. 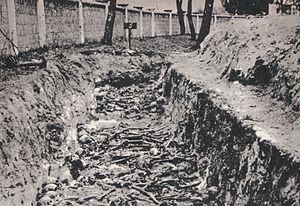 War crimes also included deliberate attacks on citizens and property of neutral states as they fall under the category of non-combatants, as at the Japanese attack on Pearl Harbor. As the attack on Pearl Harbor happened without a declaration of war, without explicit warning, and went out of proportion, all military and civilian casualties at the harbor were officially non-combatants, the military were not ready for face up to the attack and the attack was declared by the Tokyo Trials to go beyond justification of military necessity and therefore constituted a war crime.[25][26][27]

Under the Nuremberg Principles, war crimes are different from crimes against peace which is planning, preparing, initiating, or waging a war of aggression, or a war in violation of international treaties, agreements, or assurances. Because the definition of a state of "war" may be debated, the term "war crime" itself has seen different usage under different systems of international and military law. It has some degree of application outside of what some may consider to be a state of "war", but in areas where conflicts persist enough to constitute social instability.

The legalities of war have sometimes been accused of containing favoritism toward the winners ("Victor's justice"),[29] as some controversies have not been ruled as war crimes. Some examples include the Allies' destruction of Axis cities during World War II, such as the firebombing of Dresden, the Operation Meetinghouse raid on Tokyo (the most destructive single bombing raid in history) and the atomic bombings of Hiroshima and Nagasaki;[30] and the mass killing of Biharies by Kader Siddique and Mukti Bahini[31] before or after victory of Bangladesh Liberation War in Bangladesh between 1971 and 1972. 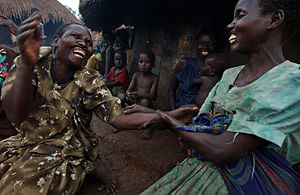 Two women in Gulu, Uganda whose lips have been cut off by Lord's Resistance Army rebels.

In regard to the strategic bombing during World War II, it should be noticed that at the time, there was no international treaty or instrument protecting a civilian population specifically from attack by aircraft,[32] therefore the aerial attacks on civilians were not officially war crimes. Because of this, the Allies at the trials in Nuremberg and Tokyo never prosecuted the Germans, including Luftwaffe commander-in-chief Hermann Göring, for the bombing raids on Warsaw, Rotterdam, and British cities during the Blitz as well as the indiscriminate attacks on Allied cities with V-1 flying bombs and V-2 rockets nor the Japanese for the aerial attacks on crowded Chinese cities.[33] Although there are no treaties specific to aerial warfare,[32] Protocol 1, Article 51 of the Geneva Conventions explicitly prohibits the bombardment of cities where civilian population might be concentrated regardless of any method.[22] (see Aerial bombardment and international law).

Controversy aroused when the Allies re-designated German POWs (under the protection of the 1929 Geneva Convention on Prisoners of War) as Disarmed Enemy Forces (allegedly unprotected by the 1929 Geneva Convention on Prisoners of War), many of which then were used for forced labor such as clearing minefields.[34] By December 1945, six months after the war had ended, it was estimated by French authorities that 2,000 German prisoners were still being killed or maimed each month in mine-clearing accidents.[34] The wording of the 1949 Third Geneva Convention was intentionally altered from that of the 1929 convention so that soldiers who "fall into the power" following surrender or mass capitulation of an enemy are now protected as well as those taken prisoner in the course of fighting.[35][36]