The Militia Acts were passed in response to the overwhelming U.S. losses at St. Clair's Defeat in 1791.[1] The Constitution permitted Congress to provide for calling forth the militia, but it was understood at the time that the president could not do so on his own authority absent that statutory provision. There was a widespread fear that the Western Confederacy of American Indians would exploit their victory during the recess of Congress. St. Clair's defeat was blamed in part on the poor organization and equipment of his army.[2] Congress took action to remedy these problems in 1792.

The first Act, passed May 2, 1792, provided for the authority of the president to call out the militias of the several states, "whenever the United States shall be invaded, or be in imminent danger of invasion from any foreign nation or Indian tribe".[3] The law also authorized the President to call the militias into Federal service "whenever the laws of the United States shall be opposed or the execution thereof obstructed, in any state, by combinations too powerful to be suppressed by the ordinary course of judicial proceedings, or by the powers vested in the marshals by this act".[4] This provision likely referred to uprisings such as Shays' Rebellion. The president's authority in both cases was to expire after two years. 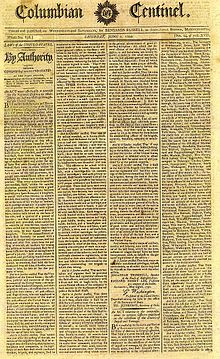 Front page of a newspaper announcing the second Militia Act of 1792.

Militia members, referred to as "every citizen, so enrolled and notified", "...shall within six months thereafter, provide himself..." with a musket, bayonet and belt, two spare flints, a cartridge box with 24 bullets, and a knapsack. Men owning rifles were required to provide a powder horn, ¼ pound of gunpowder, 20 rifle balls, a shooting pouch, and a knapsack.[5] Some occupations were exempt, such as congressmen, stagecoach drivers, and ferryboatmen.

The militias were divided into "divisions, brigades, regiments, battalions, and companies" as the state legislatures would direct.[6] The provisions of the first Act governing the calling up of the militia by the president in case of invasion or obstruction to law enforcement were continued in the second act.[7] Court martial proceedings were authorized by the statute against militia members who disobeyed orders.[8]

Use and subsequent amendments