From Infogalactic: the planetary knowledge core
(Redirected from Murder She Wrote)
Jump to: navigation, search
This article is about the television series. For the reggae song, see Chaka Demus & Pliers.

Murder, She Wrote is an American television mystery series starring Angela Lansbury as mystery writer and amateur detective Jessica Fletcher.[4][5] The series aired for 12 seasons with 264 episodes from 1984 to 1996 on the CBS network. It was followed by four TV films and a spin-off series was produced in 1987, The Law & Harry McGraw.[6][7] It is one of the most successful and longest-running television shows in history, with close to 23 million viewers in its prime, and was a staple of the CBS Sunday night lineup for a decade.[8] In syndication, the series is still successful throughout the world.

Since the series ended in 1996, a series of four TV movies was released between 1997 and 2003, and a game created by Legacy Interactive was released for the PC platform in 2009.[9] A second game was released in 2012.[10] A spin-off book series, written by Donald Bain, continues publication at present.

Murder, She Wrote might never have come about had producers Richard Levinson and William Link succeeded with their TV series Ellery Queen. That series folded after a single season, but Levinson and Link were still committed to the concept of a bestselling murder-mystery novelist who solved real murders when not at the typewriter. In collaboration with writer-producer Peter S. Fischer, with whom they had previously worked on Ellery Queen and Columbo, Link and Levinson changed the sex of their protagonist from male to female and transformed the character from a good-looking, absent-minded young pedant to a middle-aged, down-to-earth widow.

Murder, She Wrote was never pitched as an American version of the Agatha Christie character Miss Marple, contrary to rumors. The show was initially offered to actress Jean Stapleton, who turned it down stating that, after nine years of playing the ditsy but well-meaning Edith Bunker on All in the Family and Archie Bunker's Place, respectively, she did not want to be tied down to another series. Doris Day was offered the part afterwards, and also declined.

Fischer, Levinson and Link thought Angela Lansbury would be perfect in the part but had not dreamed that she would be interested in a television series. Earlier, she had acted in two film adaptations of Agatha Christie's mystery novels: as the murder suspect/victim Salome in Death on the Nile (1978 film) and as the famous sleuth Miss Marple in The Mirror Crack'd (1980). When the latter film failed, the offer for Lansbury to reprise Miss Marple in three more films never materialized.[11] When she made it known she would be available if the right project came along, the trio of creators sent her the script and almost immediately, Lansbury felt she could do something with the role of Jessica Fletcher. With Murder, She Wrote debuting on Sunday, September 30, 1984, the producers were able to parlay their "mystery writer/amateur detective" premise into a 12-year hit for CBS. It also made Lansbury, known previously for her motion picture and Broadway stage work, a household name for millions of television viewers.

The title comes from Murder, She Said, which was the title of a 1961 film adaptation of Agatha Christie's Miss Marple novel 4:50 from Paddington.

The show revolves around the day-to-day life of Jessica Fletcher, a childless, widowed, retired English teacher who becomes a successful mystery writer. Despite fame and fortune, Jessica remains a resident of Cabot Cove, a cozy coastal town in Maine, and maintains her links with all of her old friends, never letting her success go to her head. Exterior shots of Cabot Cove were filmed in Mendocino, California. The fictional "Cabot Cove" name for the series' coastal town was derived from the name of an actual bay harbor inlet in Kennebunkport, Maine, located near the town's center, on the road where motels and lobster shack dives are located.

The show mostly starts with a preview of the episode's events, with Jessica stating: "Tonight On Murder, She Wrote..." Jessica invariably proves more perceptive than the official investigators, who are almost always willing to arrest the most likely suspect. By carefully piecing the clues together and asking astute questions, she always manages to trap the real murderer. Murder occurred with such regularity in her vicinity that the term "Cabot Cove syndrome" was coined to describe the constant appearance of dead bodies in remote locations. Indeed, if Cabot Cove existed in real life, it would top the FBI's national crime statistics in numerous categories, with some analysis suggesting that the homicide rate in Cabot Cove exceeds even that of the real-life murder capital of the world.[12] Fan theories have even arose that theorize that Jessica herself is murdering these people since there is no better explanation for the sheer number of murders she encounters throughout the long run of the series besides her involvement in all of them.[13]

Jessica's relationship with law enforcement officials varies from place to place. Both sheriffs of Cabot Cove resign themselves to having her meddle in their cases. However, most detectives and police officers do not want her anywhere near their crime scenes, until her accurate deductions convince them to listen to her. Some are happy to have her assistance from the start, often because they are fans of her books. With time, she makes friends in many police departments across the U.S., as well as with a British police officer attached to Scotland Yard.

At the start of season eight, more of the stories were set in New York City with Jessica moving into an apartment there part-time in order to teach criminology. 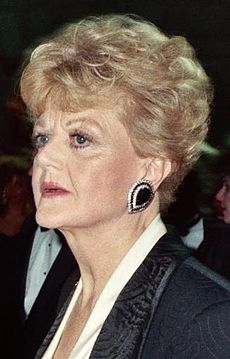 By August 1988, when Lansbury expressed her weariness of her commitment, the series was expected to end in June 1990. Nevertheless, Lansbury continued in the role. By the end of the 1994–95 season, Murder, She Wrote's 11th, Lansbury was content continuing with the series, although her advancing age became a concern to the producers and the network (she had just turned 70). CBS effectively made the decision for her that autumn. After spending 11 years on Sunday, the network's longest-running weekly series (at that time) was moved to Thursday nights at 8 p.m. This put the series in direct competition with the first hour of NBC's Must See TV lineup, which had been drawing the highest ratings of the week for any network for years.

Despite protests of many of the show's fans (who believed CBS was intentionally setting the show up to fail in its new timeslot), CBS refused to budge on the new timeslot. Murder, She Wrote plummeted from eighth to 58th in the yearly ratings; the series lost nearly 6 million viewers as the audience was not willing to follow it to Thursday, which left CBS with little choice but to end Murder, She Wrote after 12 seasons in August 1996. To soften the blow, the network agreed to air the final four episodes in its original Sunday night timeslot, as well as commission four Murder, She Wrote movies over the next few years; the first was broadcast in 1997, with three more following, in 2000, 2001, and 2003.[14] Lansbury stated in May 2011 that she would like to make a comeback appearance as Jessica Fletcher.[15]However, in a 2015 interview, Lansbury squashed the idea of reprising the much beloved character stating, "I think it would be a downer. In some way, we’d have to show her as a much older woman, and I think it’s better to maintain that picture we have in our mind’s eye of her as a vigorous person. I’m still pretty vigorous, especially in the garden … but if I wanted to transform myself back into the woman I looked like then, it would be ridiculous. And I can’t do that."[16]

The episode "Magnum on Ice" concludes a crossover that begins on the Magnum, P.I. episode "Novel Connection" in which Jessica comes to Hawaii to investigate an attempt to murder Robin Masters' guests, then tries to clear Magnum when he's accused of killing the hitman.

Over its twelve-year run Murder, She Wrote received numerous award nominations. Angela Lansbury herself holds the record for the most Emmy nominations for outstanding lead actress in a drama series with twelve, one for each season. She never won, which is also a record.

Murder, She Wrote maintained extremely high ratings finishing in the top 15 of shows for eleven of its 12 seasons (eight of which it was in the top 10), even well into its late seasons. At the beginning of its 12th season in 1995, CBS moved the show from its extremely popular Sunday night time slot to Thursday night forcing it to compete with NBC's Must See TV line up, and as a result the ratings plummeted. The show rated as the following:

Deadline Hollywood reported in October 2013 that NBC was planning a "reboot" of the series, starring Oscar winning actress Octavia Spencer as a "hospital administrator and amateur sleuth who self-publishes her first mystery novel."[30] Angela Lansbury has commented that she is not a fan of using the title, saying "I think it's a mistake to call it 'Murder, She Wrote,' because 'Murder, She Wrote' will always be about Cabot Cove and this wonderful little group of people who told those lovely stories and enjoyed a piece of that place, and also enjoyed Jessica Fletcher, who is a rare and very individual kind of person." Early on it was decided by producers that Spencer's character would not be named Jessica Fletcher, for only Lansbury could play Jessica Fletcher.[31] It was announced on January 21, 2014, that the reboot would not be going forward.[32]

Since its original run on CBS, Murder, She Wrote has been syndicated in many countries around the world.

In 1985, Warren Company released a Murder, She Wrote board game. In the game, one player takes the hidden role of a killer and the other players try to determine which player is the killer through deduction. The killer is successful if he or she can kill five of the characters on the game-board and escape, while the detective players win by correctly deducing the identity of the killer.

In December 2009, casual game developer and publisher Legacy Interactive, under license with Universal Pictures Digital Platforms Group (UPDPG), announced the release a PC and Macintosh video game based on the television series. In the game, players help Jessica Fletcher to solve five unusual murders.[35] A sequel, Murder She Wrote 2, was launched by Legacy Interactive in November 2012.[citation needed]