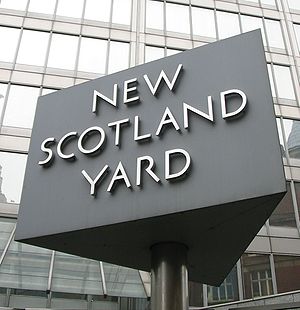 Scotland Yard (officially New Scotland Yard) is a metonym for the headquarters of the Metropolitan Police Service, the territorial police force responsible for policing most of London.

The name derives from the location of the original Metropolitan Police headquarters at 4 Whitehall Place, which had a rear entrance on a street called Great Scotland Yard.[1] The Scotland Yard entrance became the public entrance to the police station, and over time the street and the Metropolitan Police became synonymous. The New York Times wrote in 1964 that just as Wall Street gave its name to New York's financial district, Scotland Yard became the name for police activity in London.[2]

Commonly known as the Met, the Metropolitan Police Service is responsible for law enforcement within Greater London, excluding the square mile of the City of London, which is covered by the City of London Police. Additionally, the London Underground and National Rail networks are the responsibility of the British Transport Police. The Metropolitan Police was formed by Robert Peel with the implementation of the Metropolitan Police Act, passed by Parliament in 1829.[1] Peel, with the help of Eugène-François Vidocq, selected the original site on Whitehall Place for the new police headquarters. The first two commissioners, Charles Rowan and Richard Mayne, along with various police officers and staff, occupied the building. Previously a private house, 4 Whitehall Place (Lua error in Module:Coordinates at line 668: callParserFunction: function "#coordinates" was not found.) backed onto a street called Great Scotland Yard. 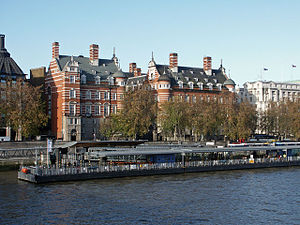 By 1887, the Met headquarters had expanded from 4 Whitehall Place into several neighbouring addresses, including 3, 5, 21 and 22 Whitehall Place; 8 and 9 Great Scotland Yard, and several stables.[1] Eventually, the service outgrew its original site, and new headquarters were built (Lua error in Module:Coordinates at line 668: callParserFunction: function "#coordinates" was not found.) on the Victoria Embankment, overlooking the River Thames, south of what is now the Ministry of Defence's headquarters. In 1888, during the construction of the new building, workers discovered the dismembered torso of a female; the case, known as the 'Whitehall Mystery', was never solved. In 1890, police headquarters moved to the new location, which was named New Scotland Yard. By this time, the Met had grown from its initial 1,000 officers to about 13,000 and needed more administrative staff and a bigger headquarters. Further increases in the size and responsibilities of the force required even more administrators, and in 1907 and 1940, New Scotland Yard was extended further (Lua error in Module:Coordinates at line 668: callParserFunction: function "#coordinates" was not found.). This complex is now a Grade I listed structure known as the Norman Shaw Buildings.

By the 1960s the requirements of modern technology and further increases in the size of the force meant that it had outgrown its Victoria Embankment site. In 1967 New Scotland Yard moved to the present building on Broadway, which was an existing office block acquired under a long-term lease; the first New Scotland Yard is now partly used as the base for the Met's Territorial Support Group. 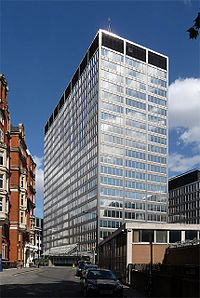 The Met's senior management team, who oversee the service, is based at New Scotland Yard at 10 Broadway, close to St. James's Park station, along with the Met's crime database. This uses a national computer system developed for major crime enquiries by all British forces, called Home Office Large Major Enquiry System, more commonly referred to by the acronym HOLMES, which recognises the great fictional detective Sherlock Holmes. The training programme is called 'Elementary', after Holmes's well-known, yet apocryphal, phrase "elementary, my dear Watson". Administrative functions are based at the Empress State Building, and communication handling at the three Metcall complexes, rather than at Scotland Yard.

The Metropolitan Police Authority bought the freehold of the building for around £120 million in 2008.[4]

In May 2013 the Met confirmed that the New Scotland Yard building on Broadway will be sold and the force's headquarters will be moved to the Curtis Green Building (Lua error in Module:Coordinates at line 668: callParserFunction: function "#coordinates" was not found.) on the Victoria Embankment, which will be renamed Scotland Yard. A competition was announced for architects to redesign the building prior to the Met moving to it in 2015.[5] This building currently houses the Territorial Policing headquarters and is adjacent to the original "Scotland Yard" (Norman Shaw North Building).

Ahead of the move to the Embankment, the Met sold New Scotland Yard to Abu Dhabi Financial Group in December 2014 for £370 million.[6]

Scotland Yard has become internationally famous as a symbol of policing, and fictional detectives from Scotland Yard feature in many works of crime fiction.