Examples include the Old Town Hall in Massachusetts, and Plumb House in Virginia. 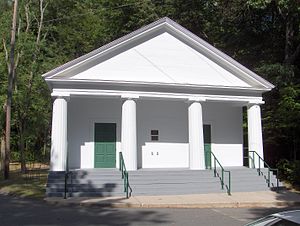 Greek Revival architecture is a movement of the late 18th and early 19th centuries in Europe. It emerged in the U.S. following the War of 1812 and while a revolutionary war in Greece attracted America's interest. Greek Revival architecture was popularized by Minard Lafever's pattern books: The Young Builders' General Instructor in 1829, the Modern Builders' Guide in 1833, The Beauties of Modern Architecture in 1835, and The Architectural Instructor in 1850.

Examples include The Rotunda by Thomas Jefferson at the University of Virginia, and the Hammond-Harwood House in Annapolis, Maryland.

Late Victorian architecture is widely distributed on the register's listings, in every state.

The Queen Anne style architecture period of Victorian architecture is well represented on the register listings. 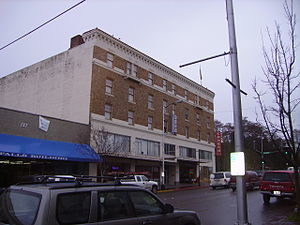 It is a grouping of architectural styles that has been applied as a term by the U.S. National Register of Historic Places in hundreds of listings. There are many buildings designed in an amalgam of revival and USD styles that defy simpler classification (e.g. simply as Egyptian Revival architecture) because they are a mix of styles.

Mission/Spanish Revival is an amalgam of two distinct styles popular in different eras: Mission Revival Style architecture and Spanish Colonial Revival architecture. The combined term, as well as the individual terms, is often used in classification of buildings listed on the U.S. National Register of Historic Places.[1]

An example is the Painted Desert Inn in Arizona's Petrified Forest National Park.

Examples in California include Grauman's Egyptian Theatre in Hollywood, and the Rosicrucian Egyptian Museum in San Jose.

This revivalist style frequently blends Maya architectural and artistic motifs with those of other Mesoamerican cultures, particularly of Aztec architecture.

Examples include the Mayan Theater in Downtown Los Angeles, the Hollyhock House by Frank Lloyd Wright in east Hollywood, and the Aztec Hotel on U.S. Route 66, in California.

"Postmedieval English" architecture is a style term used for a number of NRHP listings, including William Ward Jr. House in Middlefield, Connecticut.

"American Movements" is a phrase used also in visual arts of the United States to refer to U.S.-centered or -originated movements such as Pop Art, and such as in the art of Edward Hopper and Norman Rockwell. (Note: Hopper and Rockwell themselves portrayed various architectural styles in their paintings of small-town and urban America.)

Bungalow/Craftsman is a term commonly appearing in National Register listings, which reflects American Craftsman styling and Bungalow building type. Craftsman style, depending on one's definition, may apply only to decorative arts of furniture and other objects while not to building architecture. Nonetheless, many thousands of craftsman-styled California bungalow houses nationwide have been built. When listed on the National Register, they usually receive the "Bungalow/Craftsman" classification.

There are hundreds of National Register-listed buildings of the Early Commercial architecture type.[1] The style may be a subtype/predecessor of the full Chicago School style architecture.[citation needed]