The National Register of Historic Places is the United States' official list of historic sites worthy of preservation which was authorized under the National Historic Preservation Act of 1966. There are around 84,000 listings of individual properties (sites, buildings, structures, and objects) and historic districts. The districts include, in turn, about 1,000,000 buildings, sites and structures. The Register automatically includes all 2,450 or so U.S. National Historic Landmarks designated by the U.S. Secretary of the Interior as well as the approximately 300 historic areas that are National Monuments declared by the U.S. president or National Historic Sites or other National Park Service areas authorized by the U.S. congress.

The National Register of Historic Places is primarily a tool to recognize the historical significance of a building, structure, object, site, or district. Listing in the National Register does not directly restrict private property owners from the use of their property. Some states, however, might have state or local laws that become effective when a place is listed on the National Register. In contrast, a local historic district often has enabling ordinances at the municipal level that restrict certain kinds of changes to properties and thereby encourages those changes that are sensitive to the historic character of an area.

Any individual can prepare a National Register nomination although historians and historic preservation consultants are often employed for this work. The nomination contains basic information on the type of significance embodied in the building, structure, object, district, or site. The State Historic Preservation Office receives National Register nominations and supplies feedback to the individual preparing the nomination. A description of the various aspects of social history and commerce, architectural styles and ownership of the property is also part of the nomination. Template:/box-footer 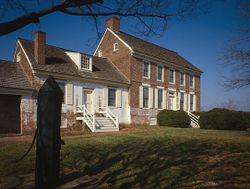 The John Dickinson House, generally known as Poplar Hall, is located on the John Dickinson Plantation, a property owned by the State of Delaware and open to the public as a museum by the Delaware Division of Historical and Cultural Affairs. It was the boyhood home and sometime residence of the American revolutionary leader John Dickinson.

The main house is an Early Georgian mansion and was built on a 13,000-acre (53 km2) plantation in 1739/40 by Judge Samuel Dickinson, the father of John Dickinson. Wings were added in 1752 and 1754. The house faced a near-by bend of the St. Jones River which is no longer there as the river has been straightened. The original house suffered major damage during a British raid in August 1781 and was nearly destroyed in a fire in 1804. John Dickinson lived there for extended periods only in 1776/77 and 1781/82, although he kept up a keen interest in the property and often visited. Purchased by the National Society of Colonial Dames of America in 1952, it was given to the State of Delaware and declared a National Historic Landmark in 1961. Learn more... 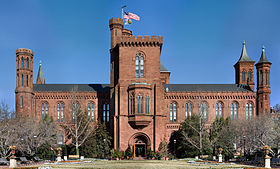 100px
Ammi Burnham Young (June 19, 1798 - March 14, 1874) was an important 19th century American architect whose commissions transitioned from the Greek Revival to the Neo-Renaissance styles. His Second Vermont State House brought him fame and success, which eventually led him to become the first Supervising Architect of the U.S. Treasury Department. As federal architect, he was responsible for creating across the United States numerous custom houses, post offices, courthouses and hospitals, many of which are today on the National Register. His traditional architectural forms lent a sense of grandeur and permanence to the new country's institutions and communities. Young pioneered the use of iron in construction. Learn more...
→ Archive