The neck is the part of certain string instruments that projects from the main body and is the base of the fingerboard, where the fingers are placed to stop the strings at different pitches. Guitars, banjos, ukuleles, lutes, the violin family, and the mandolin family are examples of instruments which have necks. Necks are also an integral part of certain woodwind instruments, like for instance the saxophone.

The word for neck also sometimes appears in other languages in musical instructions. The French term in this case is manche.

The neck of a guitar includes the guitar's frets, fretboard, tuners, headstock, and truss rod. The wood used to make the fretboard will usually differ from the wood in the rest of the neck. The bending stress on the neck is considerable, particularly when heavier gauge strings are used (see Strings and tuning), and the ability of the neck to resist bending (see Truss rod) is important to the guitar's ability to hold a constant pitch during tuning or when strings are fretted. The rigidity of the neck with respect to the body of the guitar is one determinant of an instrument's quality. Conversely, the ability to change the pitch of the note slightly by deliberately bending the neck forcibly with the fretting arm is a technique occasionally used, particularly in the blues genre and those derived from it, such as rock and roll. The shape of the neck's cross-section can also vary from a gentle curve to a more pronounced "V" shape. (The fretboard is typically gently rounded across its width.)

Marker dots (see Inlay (guitar)) on the face of the fretboard are usually placed at frets 3, 5, 7, 9, 12 (double dot to indicate the octave), 15, 17, 19, 21, 24 (double dot to indicate the second octave). It's also common that there are marker dots on the side of the neck, near the edge of the fretboard, where the player can easily see which fret he or she is on. Sometimes the dots are replaced with bars, the octave positions having a wider bar. Classical guitars almost never feature position markers, especially on the fretboard's face, whereas electric guitars usually do. This is due to several factors:

1) Electric guitars do not rely on a resonating body chamber to produce sound and therefore the inert bodywood may be carved more deeply to allow better access to higher frets.

2) Electric guitars also sport an extended high-end range, due to the above reason. Typically, up to 24 frets are used.

3) Electric guitars vary greatly in terms of scale length, depth of lower and - if present - upper rout and where these connect to the neck at its heel, and number of frets (usually between 21 and 24). In contrast, classical guitar dimensions are standardised, with the 12th fret aligning with the neck-end of the body, use of only 19 frets, and scale length of 25.6".

The neck of a violin is usually maple with a flamed figure compatible with that of the ribs and back. The shape of the neck and fingerboard affect how easily the violin may be played. Fingerboards are dressed to a particular transverse curve, and have a small lengthwise "scoop," or concavity, slightly more pronounced on the lower strings, especially when meant for gut or synthetic strings. Many authentic old instruments have had their necks reset to a slightly increased angle, and lengthened by about a centimeter. The neck graft allows the original scroll to be kept with a Baroque violin when bringing its neck to conformance with modern standard.

The neck of a lute is made of light wood, with a veneer of hardwood (usually ebony) to provide durability for the fretboard beneath the strings. 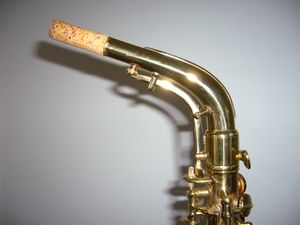 Saxophone necks are typically made from brass, are detachable and either straight or curved.

There are basically four ways of attaching the neck to the body using glued joints:

The two factors in deciding what type of neck joint to use are: