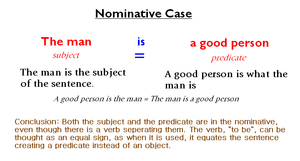 A chart explaining the concept of the nominative case.

The nominative case (abbreviated NOM) is one of the grammatical cases of a noun or other part of speech, which generally marks the subject of a verb or the predicate noun or predicate adjective, as opposed to its object or other verb arguments. Generally, the noun "that is doing something" is in the nominative, and the nominative is the dictionary form of the noun.

Nominative comes from Latin cāsus nominātīvus "case for naming",[1] which was translated from Ancient Greek ὀνομαστικὴ πτῶσις, onomastikḗ ptôsis "inflection for naming",[2] from onomázō "call by name",[3] from ónoma "name".[4] Dionysius Thrax in his Art of Grammar refers to it as orthḗ or eutheîa "straight",[5] in contrast to the oblique or "bent" cases.

Nominative cases are found in Arabic, Estonian, Slovak, Ukrainian, Hungarian, Lithuanian, Georgian, German, Latin, Greek, Icelandic, Old English, Old French, Polish, Serbian, Czech, Romanian, Russian, and Pashto, among other languages. English still retains some nominative pronouns, which are contrasted with the accusative (comparable to the oblique or disjunctive in some other languages): I (accusative me), we (accusative us), he (accusative him), she (accusative her), they (accusative them) and who (accusative whom). A usage that is archaic in most, but not all, current English dialects is the singular second-person pronoun thou (accusative thee). A special case is the word you: Originally, ye was its nominative form and you the accusative, but over time you has come to be used for the nominative as well.

The term "nominative case" is most properly used in the discussion of nominative–accusative languages, such as Latin, Greek, and most modern Western European languages.

Some writers on English grammar[6][7][8][9] employ the term subjective case instead of nominative to draw attention to the differences between the "standard" generic nominative and the way it is used in English.

Generally, when the term subjective case is used, the term objective is used for the oblique case, which covers the roles of accusative, dative, and objects of a preposition. The genitive case is then usually called the possessive form and often is not considered as a noun case per se; English is then said to have two cases, the subjective and the objective. This view is an oversimplification,[10] but it is didactically useful.

The nominative also marks things equal to the subject (that is, a predicate noun or adjective).