From Infogalactic: the planetary knowledge core
Jump to: navigation, search
This article is about the Finnish airline. For the former Swedish regional airline, see Nordic Regional.

Nordic Regional Airlines Oy, also known as Norra, and previously known as Flybe Nordic,[1] is a Finnish airline owned by Finnair. The airline began operations on 20 October 2011 as a joint venture between Flybe and Finnair, following their acquisition of Finncomm Airlines. Flybe sold its 60% to Finnair as a temporary solution at a price of one euro (€1) in March 2015. Ownership negotiations with StaffPoint and G.W. Sohlberg are still under way. The airline has operated under Finnair's flight code since 1 May 2015.

The creation of the airline was announced on 1 July 2011, when Flybe and Finnair revealed plans to jointly purchase Finnish Commuter Airlines (FCA) and rebrand the airline Flybe Nordic, with Flybe and Finnair each holding a stake in the new entity.[2] Under the terms of the agreement, contingent on approval by regulatory authorities, the purchase price of FCA was €25 million, of which Flybe would pay €12 million and Finnair €13 million.[3] Flybe has a majority stake in Flybe Nordic, holding a 60% stake in the airline, with Finnair holding the remaining 40%; Flybe has three seats on the airline's board of directors with Finnair having the other two.[3] Flybe planned to invest a total of €23.6 million into the new airline, including expenses such as loan repayments in addition to the purchase price of FCA.[4]

At the time of the announcement of Flybe Nordic's creation, Flybe planned to begin operating the new airline on 1 August 2011, with the FCA name being phased out,[2] though the start date was later pushed back to 30 October.[5] A new route network was also planned to be announced in mid-August.[3]

Flybe announced in November 2014 that it would sell its 60% stake in the airline for €1, in an attempt to reduce group costs.[6] In February 2015 the Finnish Competition and Consumer Authority approved the sale of its stake (60%) to StaffPoint Holding and G.W. Sohlberg.[7] Flybe sold its 60% to Finnair as a temporary solution at a price of one euro (€1) in March 2015. Ownership negotiations with StaffPoint and G.W. Sohlberg are still under way. The airline has operated under Finnair's flight code since 1 May 2015.[8]

In May 2015 Flybe Nordic was rebranded as Nordic Regional Airlines, Norra.[9] 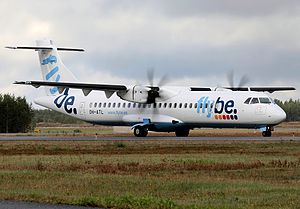 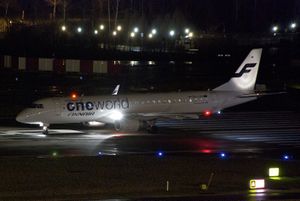 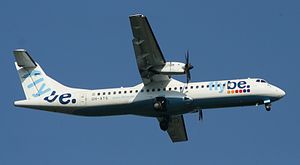 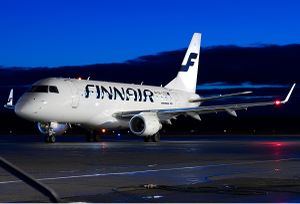 A former Nordic Regional Airlines Embraer 170 in Finnair livery at Joensuu Airport in 2011.

As of November 2014, Flybe Nordic has codeshare agreements with the following airlines:

The ATR 72 are owned by Finnair, which bought them from FCA at a cost of €104 million, and leased to Nordic Regional Airlines (Flybe at the time), as the Embraer 170s, previously owned by Finnair.[2]