From Infogalactic: the planetary knowledge core
Jump to: navigation, search
For other uses, see Omri (disambiguation).

Omri (Hebrew: עמרי, Modern Omri, Tiberian ʻOmrî) (fl. 9th century BC) was the sixth king of Israel after Jeroboam, a successful military campaigner, and the founder of the House of Omri, an Israelite royal house which included other monarchs such as Ahab, Ahaziah, Joram, and Athaliah. Along with his predecessor king Zimri who ruled for only seven days, Omri is the first king mentioned in the Bible without a statement of his tribal origin: although some scholars speculate that Omri was from the tribe of Issachar, this is not yet confirmed by any biblical account or scientific or historical evidence.[1]

Mentioned in the Hebrew Bible as well as extra-biblical sources such as the Mesha stele and the Black Obelisk of Shalmaneser III, Omri is also credited with the construction of Samaria and establishing it as his capital.

Struggle for the succession

Omri was "commander of the army" of King Elah when Zimri, "commander of half the king's chariots", murdered Elah and made himself king. Instead, the troops at Gibbethon chose Omri as king, and he led them to Tirzah where they trapped Zimri in the royal palace. To avoid the certain tortures of capture, Zimri set fire to the palace and died after a reign of only seven days.[2] Although Zimri was eliminated, "half of the people" supported Tibni in opposition to Omri. (1 Kings 16:21-22) It took Omri four years to subdue Tibni and at last proclaim himself undisputed king of Israel. Nothing is said in Scripture about the lineage of Omri. His name is either Amorite or Arabic,[3] suggesting he was a foreign mercenary.[4][contradictory]

Initially, Omri's capital was in Tirzah, but the associations of Tirzah were so repellent and the location so poor for a capital, that Omri purchased a new site on a hill, from Shemer for two talents of silver (about 60 kg), after which he built a new capital of the kingdom in Samaria.[2]

Omri's rule over Israel was secure enough that he could bequeath his kingdom to his son Ahab, thus beginning a new dynasty (sometimes called the "Omrides'), and his descendants not only ruled over the kingdom of Israel for the next forty years, but also briefly over Judah. 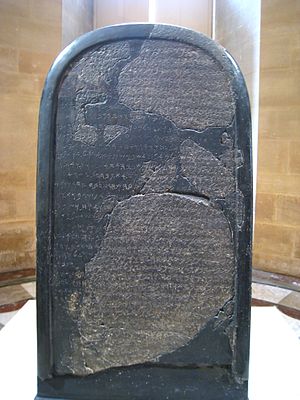 Bryant G. Wood mentions three archaeological sites indicating buildings constructed by Omri: a well-built, but unfinished structure at Tirzah, a subsequent royal house at Samaria, and a third palace at Jezreel.[4] The fortress at Jezreel was situated on one of the main east-west routes through kingdom. Hugh Williamson believes it served not only a military function, but also a political one; a very visible example of grandiose public works used as a means of social control and to assert claims of legitimacy.[6]

The Moabite Mesha stele (on display in the Louvre) indicates that Omri expanded his holdings to include northern Moab east of the Jordan River.[4] It makes reference to the oppression of Moab by "Omri King of Israel". Israel would later become identified in sources as the "House of Omri" (Bit-Humria), with the term "Israel" being used less and less as history progressed (the other defining term for "Israel" is "Samaria", beginning in the reign of Joash). Thomas L. Thompson (The Bible in History), however, interprets the Mesha stele as suggesting that Omri is an eponym, or legendary founder of the kingdom rather than an historical person.

The short-lived dynasty founded by Omri constitutes a new chapter in the history of the Northern Kingdom of Israel. It ended almost fifty years of constant civil war over the throne. There was peace with the Kingdom of Judah to the south, and even cooperation between the two rival states, while relations with neighboring Sidon to the north were bolstered by marriages negotiated between the two royal courts. This state of peace with two powerful neighbors enabled the Kingdom of Israel to expand its influence and even political control in Transjordan, and these factors combined brought economic prosperity to the kingdom.

On the other hand, peace with Sidon also resulted in the penetration of Phoenician religious ideas into the kingdom and led to a kulturkampf between traditionalists (as personified by the prophet Elijah and his followers) and the aristocracy (as personified by Omri's son and heir Ahab and his consort Jezebel). In foreign affairs, this period paralleled the rise of the Kingdom of Aram based in Damascus, and Israel soon found itself at war in the northeast. Most threatening, however, was the ascendancy of Assyria, which was beginning to expand westward from Mesopotamia: the Battle of Qarqar (853 BC), which pitted Shalmaneser III of Assyria against a coalition of local kings, including Ahab, was the first clash between Assyria and Israel. It was the first in a series of wars that would eventually lead to the destruction of the Kingdom of Israel in 722 BC and the reduction of the Kingdom of Judah to an Assyrian tributary state.

In 841 BC, the Assyrian king Shalmaneser III campaigned along the Mediterranean coast and forced Jehu to pay tribute. Assyrian kings frequently referred to Omri's successors as belonging to the "House of Omri" (Bit Hu-um-ri-a).[7] Despite the fact that Jehu ended the Omrid dynasty, the Assyrian Black Obelisk in the British Museum credits Jehu as being the "son of Omri" while the Bible describes him to be "the son of Jehoshaphat the son of Nimshi".[8]

In accounts of Tiglath-Pileser III's 732 BC campaign in Israel, Assyrian scribes referred to Israel as "Omri-Land".[4]

The Bible displays a negative attitude to King Omri, and it has been followed by later rabbinical tradition. Modern secular Israelis, however, have re-evaluated many Biblical and later Jewish historical characters in accord with the criteria of a national movement in need of heroes. As in many European national movements, ancient warriors in general and warrior kings in particular have come to be regarded more positively. Omri, a successful warrior king and the founder of a strong dynasty, is a conspicuous example.[citation needed]