Ostia Antica is a large archeological site, close to the modern suburb of Ostia, that was the location of the harbour city of ancient Rome, which is approximately 30 kilometres (19 miles) to the northeast. "Ostia" (plur. of "ostium") is a derivation of "os", the Latin word for "mouth". At the mouth of the River Tiber, Ostia was Rome's seaport, but due to silting the site now lies 3 kilometres (2 miles) from the sea.[1] The site is noted for the excellent preservation of its ancient buildings, magnificent frescoes and impressive mosaics. 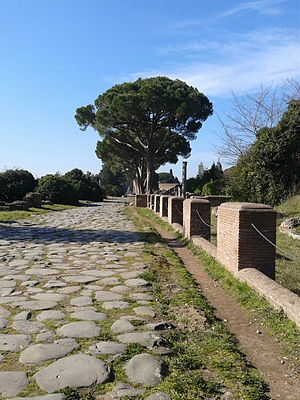 the old entrance of the city

Ostia may have been Rome's first colonia. According to the legend Ancus Marcius, the semi-legendary fourth king of Rome, first destroyed Ficana, an ancient town that was only 17 km (11 mi) from Rome and had a small harbour on the Tiber, and then proceeded with establishing the new colony 10 km (6 mi) further west and closer to the sea coast. An inscription seems to confirm the establishment of the old castrum of Ostia in the 7th century BC.[2] The oldest archaeological remains so far discovered date back to only the 4th century BC. The most ancient buildings currently visible are from the 3rd century BC, notably the Castrum (military camp); of a slightly later date is the Capitolium (temple of Jupiter, Juno and Minerva). The opus quadratum of the walls of the original castrum at Ostia provide important evidence for the building techniques that were employed in Roman urbanization during the period of the Middle Republic.

Ostia was a scene of fighting during the period of the civil wars Sulla's first civil war between Gaius Marius and Sulla during the 1st century BC. In 87 BC, Gaius attacked the city in order to cut off the flow of trade to Rome. Forces led by Cinna, Carbo and Sertorius crossed the Tiber at three points before capturing the city and plundering it. After his victory here, Gaius moved on to attack and capture Antium, Aricia and Lanuvium to further destroy the foodstores of Rome.[3]

In 68 BC, the town was sacked by pirates.[4] During the sack, the port was set on fire, the consular war fleet was destroyed, and two prominent senators were kidnapped. This attack caused such panic in Rome that Pompey the Great arranged for the tribune Aulus Gabinius to rise in the Roman Forum and propose a law, the Lex Gabinia, to allow Pompey to raise an army and destroy the pirates. Within a year, the pirates had been defeated.

The town was then re-built, and provided with protective walls by the statesman and orator Marcus Tullius Cicero.[5] 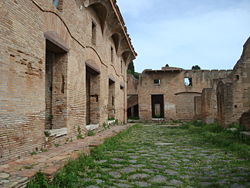 During Julius Caesar's reign as Emperor, one of his improvements to the city was his establishment of better supervision of the supply of grain to Rome. He proposed better access to grain by the use of a new harbor in Ostia along with a canal from Tarracina. 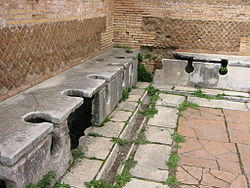 The town was further developed during the first century AD under the influence of Tiberius, who ordered the building of the town's first Forum. The town was also soon enriched by the construction of a new harbor on the northern mouths of the Tiber (which reaches the sea with a larger mouth in Ostia, Fiumara Grande, and a narrower one near to the current Fiumicino International Airport). The new harbor, not surprisingly called Portus, from the Latin for "harbor," was excavated from the ground at the orders of the emperor Claudius. This harbour became silted up and needed to be supplemented later by a harbor built by Trajan finished in the year 113 AD; it has a hexagonal form, in order to reduce the erosive forces of the waves. This took business away from Ostia itself (further down river) and began its commercial decline.

Ostia itself was provided with all the services a town of the time could require; in particular, a famous lighthouse. By 1954 eighteen mithraea had been discovered: Mithras had his largest following among the working population that were the majority of this port town. Archaeologists also discovered the public latrinas, organized for collective use as a series of seats that allow us to imagine today that the function was also a social moment. In addition, Ostia had a large theatre, many public baths, numerous taverns and inns and a firefighting service. Ostia also contained the Ostia Synagogue, the earliest synagogue yet identified in Europe; it created a stir when it was unearthed in 1960-61.[6]

Trajan too, required a widening of the naval areas, and ordered the building of another harbor, again pointing towards the north. It must be remembered that at a relatively short distance, there was also the harbor of Civitavecchia (Centum Cellae), and Rome was starting to have a significant number of harbours, the most important remained Portus. 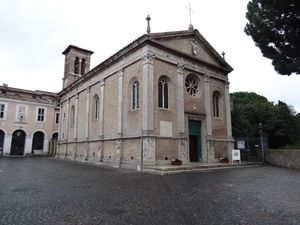 Ostia grew to 50,000 inhabitants in the 2nd century, reaching a peak of some 100,000 inhabitants in the 2nd and 3rd centuries AD.[7][8][9] Ostia became an episcopal see as early as the 3rd century AD, the cathedral (titulus) of Santa Aurea being located on the burial site of St. Monica, mother of Augustine; she died in an inn in the town. In time, naval activities became focused on Portus instead. A slow decadence began in the late Roman era around the time of Constantine I, with the town ceasing to be an active port and instead becoming a popular country retreat for rich aristocrats from Rome itself (along the lines of Brighton's relationship to London in the 18th century).[citation needed]

The decaying conditions of the city were mentioned by St. Augustine when he passed there in the late 4th century.[citation needed] The poet Rutilius Namatianus also reported the lack of maintenance of the city in 414 AD.

With the end of the Roman Empire, Ostia fell slowly into decay, and was finally abandoned in the 9th century due to the repeated invasions and sackings by Arab pirates, including the Battle of Ostia, a naval battle in 849 between Christians and Saracens; the remaining inhabitants moved to Gregoriopolis.[citation needed]

Ostia housed a late imperial mint; this coin of Maxentius was struck there.

A "local sacking" was carried out by Baroque architects, who used the remains as a sort of marble storehouse for the palazzi they were building in Rome. Soon after, foreign explorers came in search of ancient statues and objects. The Papacy started organizing its own investigations with Pope Pius VII; under Benito Mussolini massive excavations were undertaken from 1938 to 1942 during which several remains, particularly from the republican period, were brought to the light. The first volume of the official series Scavi di Ostia appeared in 1954; it was devoted to a topography of the town by Italo Gismondi and after a hiatus the research still continues today. Though untouched areas adjacent to the original excavations were left undisturbed awaiting a more precise dating of Roman pottery types, the "Baths of the Swimmer", named for the mosaic figure in the apodyterium, were meticulously excavated, in 1966–70 and 1974–75, in part as a training ground for young archaeologists and in part to establish a laboratory of well-understood finds as a teaching aid. It has been estimated that two thirds of the ancient town were uncovered. In 2014, a geophysical survey using magnetometry, among other techniques, revealed the existence of a boundary wall on the north side of the Tiber enclosing an unexcavated area of the city containing three massive warehouses.[10][11]