Tarquinia (Italian: [tarˈkwiːnja]), formerly Corneto, is an old city in the province of Viterbo, Lazio, Italy, known chiefly since it was (mis-)named after the ancient city of Tarquinii (Roman) or Tarch(u)na (Etruscan), although it was built across the valley on the opposite hill to that city, and overlies some of its widespread ancient cemeteries. Little is visible of the once great wealth and extent of the ancient city, but archaeology is increasingly revealing glimpses of past glories. 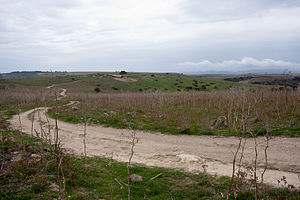 The plateau of Civita, where the ancient city was located, lies to the northeast of the modern town. 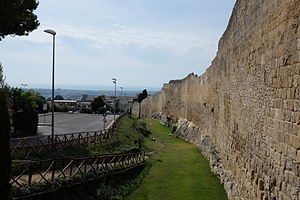 The medieval city walls of Tarquinia. The Tyrrhenian Sea is visible in the distance.

Tarquinii (Etruscan Tarch(u)na etc.[citation needed]) is one of the most ancient of Etruscan cities; the ancient myths connected with Tarch(u)na (those of its eponymous founder Tarchon - the son or brother of Tyrrhenos - and of the infant oracle Tages, who gave the Etruscans the "disciplina etrusca"), all point to the great antiquity and cultural importance of the city; and the archaeological finds bear out that Tarquinia was one of the oldest Etruscan centres which eclipsed its neighbours well before the advent of written records. It is said to have been already a flourishing city when Demaratus of Corinth brought in Greek workmen. It was the chief of the twelve cities of Etruria.[1]

Descendants of Demaratus, Lucius Tarquinius Priscus and Lucius Tarquinius Superbus became kings of ancient Rome. From Tarquinii many of the religious rites and ceremonies of Rome are said to have been derived, and even in imperial times a collegium of sixty haruspices continued to exist there.[1]

The emergence of Tarch(u)na as a trading power as early as the 8th Century BCE was influenced by its control of mineral resources located in the Tolfa Hills (Monti della Tolfa), to the south of the city, and midway to the Caeretan port of Pyrgi.

In 509 BC, after the overthrow of the Roman monarchy, the family of Tarquinius Superbus went into exile in Caere in Etruria. Tarquin sought to regain the throne, at first by the Tarquinian conspiracy and, when that failed, by force of arms. He convinced the cities of Tarquinii and Veii to support him, and led their armies against Rome in the Battle of Silva Arsia. Although the Roman army was victorious, it is recorded by Livy that the forces of Tarquinii fought well on the right wing, initially pushing back the Roman left wing. After the battle the forces of Tarquinii returned home.[2]

At the end of the fifth century and during the first half of the fourth a brief revival took place, both in the political and artistic sphere, probably under the ascendancy of the Spurinna family, whose members contributed to the renewed expansion of Tarquinia and the repopulation and growth of towns in the hinterland. The Spurinnas' tomb, known as the "Tomba dell'Orco" , is decorated with fine frescoes of a banquet uniting the famous members of the family, who are identified by inscriptions. The Spurinna family was prominent in Tarquinia up to the 1st Century AD. Recently, two fragmented slabs were found known as the Elogia Tarquiniensis. These pay tribute to Velthur Spurinnas and Aulus Spurinnas, and give a rare glimpse of Etruscan history, including the mention of one King Orgolnium of Caere, recalling the family name of Urgulanilla, which included among its members the wife of the emperor Claudius.

During this period, Tarquinia overtook Caere and other Etruscan cities in terms of power and influence. It was about this period that colossal walls were built around the city in response to threats from the Celts and from Rome. Tarquinia, not affected by Celtic invasions (about 385 BC), finally colonised all its previously held territories. This new flourishing state allowed a rapid recovery of all activities. Impressive burial monuments decorated by paintings, with sarcophagi and funerary sculptures in stone, reflect the eminent social position of the new aristocratic classes, but several inscriptions on walls and sarcophagi show the gradual process of an increasingly democratic transition was taking place.

However, during the fourth century BC when Tarquinia's expansion was at its peak, a bitter struggle with Rome took place. In 358 BC, the citizens of Tarquinii captured and put to death 307 Roman soldiers; the resulting war ended in 351 BC with a forty years' truce, renewed for a similar period in 308 BC.

When Tarquinii came under Roman domination is uncertain, as is also the date at which it became a municipality; in 181 BC its port, Graviscae (mod. Porto Clementino), in an unhealthy position on the low coast, became a Roman colony. It exported wine and carried on coral fisheries. Nor do we hear much of it in Roman times; it lay on the hills above the coast road. The flax and forests of its extensive territory are mentioned by classical authors, and we find Tarquinii offering to furnish Scipio with sailcloth in 195 BC. A bishop of Tarquinii is mentioned in 456AD.[1]

The original residential quarters of the Etruscan and Roman city of "Tarquinia", known as the "Civita", were on the long plateau to the north of the current town. Small sections of the city walls of the early 4th century BCE, of large blocks of limestone and about 8 km long remain today, as do the foundations of a great Etruscan sanctuary of the same age, known as the Ara della Regina. The decoration of this temple includes the terra-cotta group of winged horses in Hellenistic style that is considered a masterpiece of Etruscan art.

The ancient burial grounds, dating from the Iron Age (9th century BC, or Villanovan period) to Roman times, were on the adjacent promontories. The ancient city had shrunk to a small fortified settlement on the "Castellina" location during the early Middle Ages, while the more strategically placed Corneto (possibly the "Corito" mentioned in Roman sources) grew progressively to become the major city of the lower Maremma sea coast, especially after the destruction of the port of Centumcellae (modern Civitavecchia). The last historic references to "Tarquinia" are from around 1250, while the name of Corneto was changed to Tarquinia in 1922. Reversion to historical place names (not always accurately), was a frequent phenomenon under the Fascist Government of Italy as part of the nationalist campaign to evoke past glories.

The Italian wine DOC of Tarquinia produces red, white frizzante style wine. The grapes are limited to a harvest yield of 12 tonnes/ha with finished wines needing a minimum 10.5% alcohol level. The reds are a blend of at least 60% Sangiovese and/or Montepulciano, up to 25% Cesanese and up to 30% of other local red grape varieties such as Abbuoto. The whites are composed of at least 50% Trebbiano and/or Giallo, up to 35% Malvasia and up to 30 other local grape varieties with the exception of Pinot grigio that is specifically excluded from the DOC wines of Tarquinia.[3] 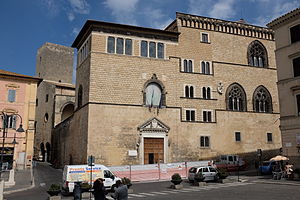 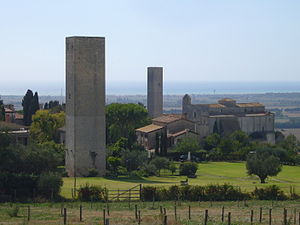 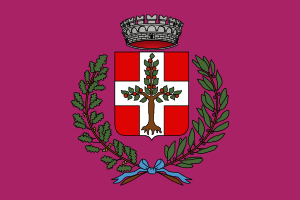 The flag of Tarquinia