A petition is a request to do something, most commonly addressed to a government official or public entity. Petitions to a deity are a form of prayer called supplication.

In the colloquial sense, a petition is a document addressed to some official and signed by numerous individuals. A petition may be oral rather than written, and in this era may be transmitted via the Internet.

Main article: Memorial to the throne

In pre-modern Imperial China petitions were always sent to an Office of Transmission (Tongzheng si or 通政司) where court secretaries read petitions aloud to the emperor.[1] Petitions could be sent by anybody, from a scholar-official to a common farmer, although the petitions were more likely read to the emperor if they were persuasive enough to impeach questionable and corrupt local officials from office.[1] When petitions arrived to the throne, multiple copies were made of the original and stored with the Office of Supervising Secretaries before the original written petition was sent to the emperor.[1]

Petitions were a common form of protest and request to the British House of Commons in the 18th and 19th centuries, the largest being the Great/People's Charter, or petition of the Chartists. They are still presented in small numbers.

The Petition Clause of the First Amendment to the U.S. Constitution guarantees the right of the people "to petition the Government for a redress of grievances." The right to petition has been held to include the right to file lawsuits against the government. 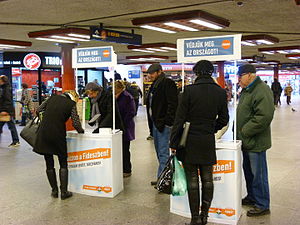 Petitions are commonly used in the U.S. to qualify candidates for public office to appear on a ballot; while anyone can be a write-in candidate, a candidate desiring that his or her name appear on printed ballots and other official election materials must gather a certain number of valid signatures from registered voters. In jurisdictions whose laws allow for ballot initiatives, the gathering of a sufficient number of voter signatures qualilfies a proposed initiative to be placed on the ballot. The 2003 California recall election, which culminated in the recall of Governor Gray Davis and the election of Arnold Schwarzenegger, began when U.S. Representative Darrell Issa employed paid signature gatherers who obtained millions of signatures at a cost to Issa of millions of dollars. Once the requisite number of signatures was obtained on the recall petition, other petitions were circulated by would-be candidates who wanted to appear on the ballot as possible replacements for Davis. After that step, a vote on the recall was scheduled.

Other types of petitions include those that sought to free Nelson Mandela during his imprisonment by the former apartheid government of South Africa. The petitions had no legal effect, but the signatures of millions of people on the petitions represented a moral force that may have helped free Mandela and end apartheid. Non-governmental organizations such as Amnesty International often use petitions in an attempt to exert moral authority in support of various causes. Other nongovernmental subjects of petition drives include corporate personnel decisions.[2] Internet petition is a new form of a petition becoming commonplace in the 21st century. Change.org is the world's most popular online petition platform that has 50 million registered users.