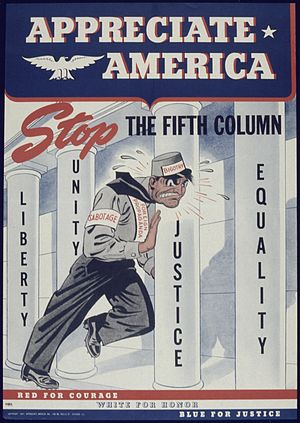 A fifth column is any group of people who undermine a larger group from within, usually in favor of an enemy group or nation. The activities of a fifth column can be overt or clandestine. Forces gathered in secret can mobilize openly to assist an external attack. This term is also extended to organized actions by military personnel. Clandestine fifth column activities can involve acts of sabotage, disinformation, or espionage executed within defense lines by secret sympathizers with an external force.

Emilio Mola, a Nationalist general during the Spanish Civil War, told a journalist in 1936 that as his four columns of troops approached Madrid, a "fifth column" (Spanish: Quinta columna) of supporters inside the city would support him and undermine the Republican government from within.[1]:126–127 The term was then widely used in Spain. Ernest Hemingway used it as the title of his only play, which he wrote in Madrid while the city was being bombarded, and published in 1938 in his book The Fifth Column and the First Forty-Nine Stories.[2]

Some writers, mindful of the origin of the phrase, use it only in reference to military operations rather than the broader and less well defined range of activities that sympathizers might engage in to support an anticipated attack.[lower-alpha 1]

In the United States at the end of the 1930s, as involvement in the European war seemed ever more likely, those who feared the possibility of betrayal from within used the newly coined term "fifth column" as a shorthand for sedition and disloyalty. The rapid fall of France in 1940 led many to blame a "fifth column" rather than German military superiority. Political factions in France blamed one another for the nation's defeat and military officials blamed the civilian leadership, all helping feed American anxieties. In June 1940, Life magazine ran a series of photos under the heading "Signs of Nazi Fifth Column Everywhere". In July 1940, Time magazine called fifth column talk a "national phenomenon".[4] In August 1940 the New York Times mentioned "the first spasm of fear engendered by the success of fifth columns in less fortunate countries".[5] One report identified participants in Nazi "fifth columns" as "partisans of authoritarian government everywhere", citing Poland,[6] Czechoslovakia, Norway, and the Netherlands. Vidkun Quisling aided the Nazis during the campaign in Norway by proclaiming a Nazi government on the day of the German invasion in 1940, and his name of "quisling" is associated with Nazi collaborators.[7]

John Langdon-Davies, a British journalist who covered the Spanish Civil War, popularized the term "fifth column" by publishing an account called The Fifth Column in 1940. The New York Times published three editorial cartoons that used the term on August 11, 1940.[8] In November 1940, Ralph Thomson, reviewing Harold Lavine's Fifth Column in America, a study of Communist and fascist groups in the U.S., in the New York Times, questioned his choice of that title: "the phrase has been worked so hard that it no longer means much of anything".[9] In the US an Australian radio play, The Enemy Within, proved to be very popular, though this popularity was due to the belief that the stories of fifth column activities were based on real events. In December 1940 the Australian censors had the series banned.[10]

British reviewers of Agatha Christie's novel N or M? in 1941 used the term to describe the struggle of two British partisans of the Nazi regime working on its behalf in England during World War II.[11]

In Frank Capra's 1941 film Meet John Doe, newspaper editor Henry Connell warns political ingenue John Doe about a businessman's plans to promote his own political ambitions using the apolitical John Doe Clubs. Connell says to John: "Listen, pal, this fifth-column stuff is pretty rotten, isn't it?", identifying the businessman with anti-democratic interests in the United States. When Doe agrees, he adds: "And you'd feel like an awful sucker if you found yourself marching right in the middle of it, wouldn't you?"[12]

Immediately following the Japanese attack on Pearl Harbor, U.S. Secretary of the Navy Frank Knox issued a statement that "the most effective Fifth Column work of the entire war was done in Hawaii with the exception of Norway."[13] The widely read columnist Walter Lippmann publicized similar accusations of sabotage on the part of Japanese Americans in his syndicated column on February 12, 1942, titled "The Fifth Column on the Coast."[14]

During the Japanese invasion of the Philippines, an article in the Pittsburgh Post-Gazette in December 1941 said the indigenous Moro Muslims were "capable of dealing with Japanese fifth columnists and invaders alike".[15] Another in the Vancouver Sun the next month described how the large population of Japanese immigrants in Davao in the Philippines welcomed the invasion: "the first assault on Davao was aided by numbers of Fifth Columnists–residents of the town".[16]

The term was soon so widely known that it very quickly appeared in popular U.S. entertainment. Introducing a 1941 newsreel, Meet John Doughboy, the animated character Porky Pig asked any "fifth columnists" in the audience to leave the theater immediately.[17] In Alfred Hitchcock's Saboteur (1942), Robert Cummings asks for help against "fifth columnists" who are conspiring to sabotage the American war effort.[citation needed] The next year in Looney Tunes' Foney Fables, the narrator of a comic fairy tale described a wolf in sheep's clothing as a "fifth columnist".[18] In 1943, an animated cartoon in the Merrie Melodies series was called The Fifth-Column Mouse.[19] Both before and after Pearl Harbor, comic books contained references to the Fifth column. [20] An example of this is the June 1942 Green Lantern. [21] 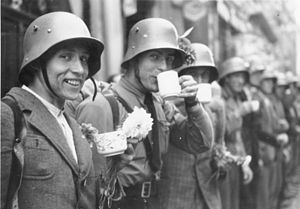