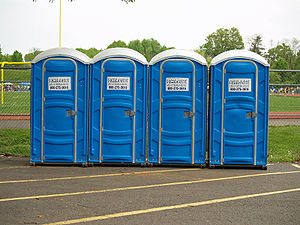 A portable toilet, often referred to as a porta-potty, honey bucket (American English),[1] Port-a-John (American English), or Portaloo (UK), ("Portaloo" is a UK and European Community registered trade mark[2]) is a simple portable enclosure containing a chemical toilet (a toilet bowl filled with disinfectant instead of water), and is typically used as a temporary toilet for construction sites or large gatherings because of its durability and convenience. Most portable toilets have black open-front U-shaped toilet seats with a cover. They are often constructed out of lightweight molded plastic.

Portable toilets are large enough for a single occupant, usually about 110 cm (43 in) square by 210 cm (83 in) high. While the units are typically free standing structures, their stability is augmented by the weight of the waste tank, which usually contains an empty liquid disinfectant dispenser and deodorizer. Some include both a seated toilet and a urinal. Most include lockable doors, ventilation near the top, and a vent pipe for the holding tank. When wind is blowing over the vent pipe it creates a low pressure area sucking the odor out. Leaving the toilet lid open will reverse the flow of the venting of the tank. 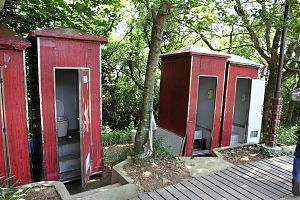 Portable potty on top of a mountain in China

Newer models include toilet paper and, occasionally, antibacterial hand sanitizer dispensers. It has become common for portable toilets to be paired with an internal hand washing station. These sink stations provide a foot pump to dispense water to wash one's hands after using the toilet. Soap and towels may be provided.

Another common pairing are portable toilets on trailers known commonly as a "toilet trailer". These trailers are typically found in 1–2 toilet configurations with a hand wash ability using either a hand washing station or a plastic barrel full of water. These trailers are often seen on agricultural fields or at road construction sites. These restrooms are ideal for situations where the workers (users) are very mobile. However, this configuration has proven problematic; most modern portable toilet waste tank designs have proven inadequate to deal with the common problem of splash-outs from the waste holding tank while being towed down bumpy roads. Also, when being towed, the high winds blow in from the vents, creating a hurricane effect inside and ejecting any toilet paper rolls from the portable toilet if not secured.

'Luxury' portable toilets also exist. They are typically mounted on large "office-like" trailers or made from converted shipping containers. They contain every amenity that a public bathroom would have such as running water, flushing toilet, stalls, urinals, mirrors, lighting, and even air conditioning and hot water in some cases. However, these luxuries come at a price as these trailers typically cost multiple times more than a typical portable toilet to buy or rent. They are commonly found at weddings, high end events/charities, and movie shoots.

Portable toilets often use a smell-reducing chemical (deodorizer) in the holding tank. This chemical is typically blue so that when it interacts with enough urine and feces, it turns green. This green color is an indication that the chemicals are no longer effective in preventing odors.[citation needed]

A much older form of portable toilet chemical is lye. Lye was used during the old "wooden outhouse days" to prevent odors. After a person is done using the portable toilet they would sprinkle a bit of lye into the holding tank.[citation needed] Lye can be dangerously corrosive to skin, and is rarely used today.

Use in outdoor advertising

Portable toilets may be used to display outdoor advertising. Some advertisers wrap portable toilets with vinyl material similar to that commonly used on cars and buses. The graphic wraps are intended to catch the attention of potential customers waiting in line to use the toilet.[citation needed]

Though more expensive than a standard permanent outdoor latrine, portable toilets have several significant benefits mostly related to their portability; as they are self-contained, they can be placed almost anywhere. They are rented to customers by companies that guarantee their cleanliness, and, as a rule, are drained, cleaned, disinfected, and deodorized on a regular basis. It is typically cheaper to rent a portable toilet than to hire a janitorial service to clean the restrooms on a weekly basis. Because they are not plumbed to pipes they do not clog, but may overflow if not emptied often enough.[citation needed]

A single portable toilet can be hauled in the back of a pick-up truck, and some corporations such as Paccar Inc manufacture special trucks for this purpose. An average portable toilet is able to hold enough sewage for 7 people during the course of a 40-hour work week before the hold reaches unsanitary conditions.[citation needed]

Because portable toilets are not plumbed, they keep the waste inside the bathroom; this can lead to a sewage smell if the portable toilet is not cleaned properly or is overused. They may also be seen as an eyesore in most communities, some of which prohibit the use of a portable toilet without special permission from the city or municipality.