Der Kinderreigen
Dance (from Old French dancier, perhaps from Frankish) generally refers to human movement either used as a form of expression or presented in a social, spiritual or performance setting.

Choreography is the art of making dances.

Definitions of what constitutes dance are dependent on social, cultural, aesthetic, artistic and moral constraints and range from functional movement (such as folk dance) to codified, virtuoso techniques such as ballet. Dance disciplines exist in sports such as gymnastics, figure skating, and synchronized swimming, and martial arts kata are often compared to dance. 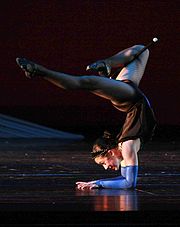 Acro dance is a style of dance that combines classical dance technique with precision acrobatic elements. It is defined by its athletic character, its unique choreography, which seamlessly blends dance and acrobatics, and its use of acrobatics in a dance context. It is a popular dance style in amateur competitive dance as well as in professional dance theater, such as Cirque du Soleil. Acro dance is known by various other names including acrobatic dance and gymnastic dance, though it is most commonly referred to simply as acro by dancers and dance professionals.

Acrobatic dance emerged in the United States and Canada in the early 1900s as one of the types of acts performed in vaudeville. Although individual dance and acrobatic acts had been performed in vaudeville for several decades prior to 1900, it was not until the early 1900s that it became popular to perform acts that combined dance and acrobatic movements. Since the decline of the vaudeville era, acrobatic dance has undergone a multi-faceted evolution to arrive at its present-day form. The most significant aspect of this evolution is the integration of ballet technique as the foundation for dance movements, thus bringing into acro dance a precision of form and movement that was absent in vaudeville acrobatic dance. 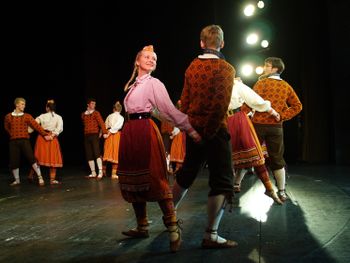 The term "folk dance" is reserved for dances which are to a significant degree bound by tradition and originated in the times when the distinction existed between the dances of "common folk" and the dances of the "high society". Nowadays the role of folk dances has changed and it isn't uncommon to find folk dancers on the stage of concert halls. University of Tartu Folk Art Ensemble performing dance named "Kodukotus" in theatre Vanemuine.

... that Stella Bloch (pictured) headlined in New York after she returned from learning Javanese dancing at the Prince of Solo's palace?

... that Rosina Galli was the prima ballerina at La Scala Theatre Ballet before she became the première danseuse at the Metropolitan Opera House?

... that LeRoy Prinz, who staged dances in dozens of Hollywood movies in the 1930s and 1940s, was more an "idea man" than a choreographer, using simple steps and dance routines?

...that the score of Giselle contains additions by Léon Minkus?

... that in 2008, the Romanian ballet mistress Mijaela Tesleoanu was one of only two non-Cubans on the payroll of the Cuban National Ballet? Template:/box-footer

Most of his career has been in theatre; however, in 2008 he served as a mentor on Bravo's reality competition Step It Up and Dance. In 2005 he won a Tony Award and a Drama Desk Award for Outstanding Choreography for La Cage aux Folles.

Let us know about your additions at the New article announcement board Template:/box-footer

Things you can do