Dance is a performance art form consisting of purposefully selected sequences of human movement. This movement has aesthetic and symbolic value, and is acknowledged as dance by performers and observers within a particular culture.[nb 1] Dance can be categorized and described by its choreography, by its repertoire of movements, or by its historical period or place of origin. 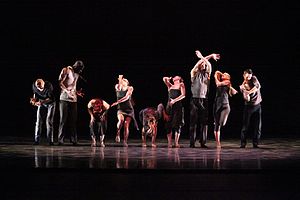 Theatrical dance, also called performance or concert dance, is intended primarily as a spectacle, usually a performance upon a stage by virtuoso dancers. It often tells a story, perhaps using mime, costume and scenery, or else it may simply interpret the musical accompaniment, which is often specially composed. Examples are western ballet and modern dance, Classical Indian dance and Chinese and Japanese song and dance dramas. Most classical forms are centred upon dance alone, but performance dance may also appear in opera and other forms of musical theatre.

Participatory dance, on the other hand, whether it be a folk dance, a social dance, a group dance such as a line, circle, chain or square dance, or a partner dance such as is common in western Western ballroom dancing, is undertaken primarily for a common purpose, such as social interaction or exercise, of participants rather than onlookers. Such dance seldom has any narrative. A group dance and a corps de ballet, a social partner dance and a pas de deux, differ profoundly. Even a solo dance may be undertaken solely for the satisfaction of the dancer. Participatory dancers often all employ the same movements and steps but, for example, in the rave culture of electronic dance music, vast crowds may engage in free dance, uncoordinated with those around them. On the other hand, some cultures lay down strict rules as to the particular dances in which, for example, men, women and children may or must participate. 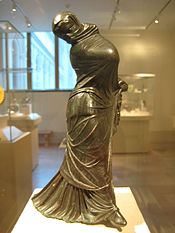 Archeological evidence for early dance includes 9,000-year-old paintings in India at the Rock Shelters of Bhimbetka, and Egyptian tomb paintings depicting dancing figures, dated c. 3300 BC. It has been proposed that before the invention of written languages, dance was an important part of the oral and performance methods of passing stories down from generation to generation.[5] The use of dance in ecstatic trance states and healing rituals (as observed today in many contemporary "primitive" cultures, from the Brazilian rainforest to the Kalahari Desert) is thought to have been another early factor in the social development of dance.[6]

References to dance can be found in very early recorded history; Greek dance (horos) is referred to by Plato, Aristotle, Plutarch and Lucian.[7] The Bible and Talmud refer to many events related to dance, and contain over 30 different dance terms.[8] In Chinese pottery as early as the Neolithic period, groups of people are depicted dancing in a line holding hands,[9] and the earliest Chinese word for "dance" is found written in the oracle bones.[10] Dance is further described in the Lüshi Chunqiu.[11][12] Primitive dance in ancient China was associated with sorcery and shamanic rituals.

During the first millennium BCE in India, many texts were composed which attempted to codify aspects of daily life. Bharata Muni's Natyashastra (literally "the text of dramaturgy") is one of the earlier texts. It mainly deals with drama, in which dance plays an important part in Indian culture. It categorizes dance into four types - secular, ritual, abstract, and, interpretive - and into four regional varieties. The text elaborates various hand-gestures (mudras) and classifies movements of the various limbs, steps and so on. A strong continuous tradition of dance has since continued in India, through to modern times, where it continues to play a role in culture, ritual, and, notably, the Bollywood entertainment industry. Many other contemporary dance forms can likewise be traced back to historical, traditional, ceremonial, and ethnic dance.

Dance is generally, though not exclusively, performed with the accompaniment of music and may or may not be performed in time to such music. Some dance (such as tap dance) may provide its own audible accompaniment in place of (or in addition to) music. Many early forms of music and dance were created for each other and are frequently performed together. Notable examples of traditional dance/music couplings include the jig, waltz, tango, disco, and salsa. Some musical genres have a parallel dance form such as baroque music and baroque dance; other varieties of dance and music may share nomenclature but developed separately, such as classical music and classical ballet. 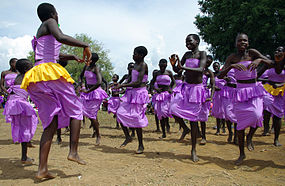 Dance in Africa is deeply integrated into society and major events in a community are frequently reflected in dances: dances are performed for births and funerals, weddings and wars.[13]:13 Traditional dances impart cultural morals, including religious traditions and sexual standards; give vent to repressed emotions, such as grief; motivate community members to cooperate, whether fighting wars or grinding grain; enact spiritual rituals; and contribute to social cohesiveness.[14]

Thousands of dances are performed around the continent. These may be divided into traditional, neotraditional, and classical styles: folkloric dances of a particular society, dances created more recently in imitation of traditional styles, and dances transmitted more formally in schools or private lessons.[13]:18 African dance has been altered by many forces, such as European missionaries and colonialist governments, who often suppressed local dance traditions as licentious or distracting.[14] Dance in contemporary African cultures still serves its traditional functions in new contexts; dance may celebrate the inauguration of a hospital, build community for rural migrants in unfamiliar cities, and be incorporated into Christian church ceremonies.[14] 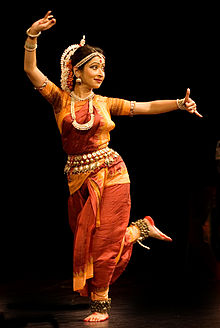 All Indian classical dances are to varying degrees rooted in the Natyashastra and therefore share common features: for example, the mudras (hand positions), some body positions, and the inclusion of dramatic or expressive acting or abhinaya. Indian classical music provides accompaniment and dancers of nearly all the styles wear bells around their ankles to counterpoint and complement the percussion.

There are now many regional varieties of Indian classical dance. Dances like "Odra Magadhi", which after decades long debate, has been traced to present day Mithila, Odisha region's dance form of Odissi (Orissi), indicate influence of dances in cultural interactions between different regions.[15]

The Punjab area overlapping India and Pakistan is the place of origin of Bhangra. It is widely known both as a style of music and a dance. It is mostly related to ancient harvest celebrations, love, patriotism or social issues. Its music is coordinated by a musical instrument called the 'Dhol'. Bhangra is not just music but a dance, a celebration of the harvest where people beat the dhol (drum), sing Boliyaan (lyrics) and dance. It developed further with the Vaisakhi festival of the Sikhs.

The dances of Sri Lanka include the devil dances (yakun natima), a carefully crafted ritual reaching far back into Sri Lanka's pre-Buddhist past that combines ancient "Ayurvedic" concepts of disease causation with psychological manipulation and combines many aspects including Sinhalese cosmology. Their influence can be seen on the classical dances of Sri Lanka.[16] 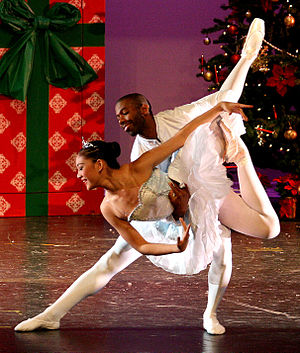 Two classical ballet dancers perform a sequence of The Nutcracker, one of the best known works of classical dance

The dances of the Middle East are usually the traditional forms of circle dancing which are modernized to an extent. They would include dabke, tamzara, Assyrian folk dance, Kurdish dance, Armenian dance and Turkish dance, among others.[17][18] All these forms of dances would usually involve participants engaging each other by holding hands or arms (depending on the style of the dance). They would make rhythmic moves with their legs and shoulders as they curve around the dance floor. The head of the dance would generally hold a cane or handkerchief.[17][19]

Ballet developed first in Italy and then in France from lavish court spectacles that combined music, drama, poetry, song, costumes and dance. Members of the court nobility took part as performers. During the reign of Louis XIV, himself a dancer, dance became more codified. Professional dancers began to take the place of court amateurs, and ballet masters were licensed by the French government. The first ballet dance academy was the Académie Royale de Danse (Royal Dance Academy), opened in Paris in 1661. Shortly thereafter, the first institutionalized ballet troupe, associated with the Academy, was formed; this troupe began as an all-male ensemble but by 1681 opened to include women as well.[5]

20th century concert dance brought an explosion of innovation in dance style characterized by an exploration of freer technique. Early pioneers of what became known as modern dance include Loie Fuller, Isadora Duncan, Mary Wigman and Ruth St. Denis. The relationship of music to dance serves as the basis for Eurhythmics, devised by Emile Jaques-Dalcroze, which was influential to the development of Modern dance and modern ballet through artists such as Marie Rambert. Eurythmy, developed by Rudolf Steiner and Marie Steiner-von Sivers, combines formal elements reminiscent of traditional dance with the new freer style, and introduced a complex new vocabulary to dance. In the 1920s, important founders of the new style such as Martha Graham and Doris Humphrey began their work. Since this time, a wide variety of dance styles have been developed; see Modern dance. 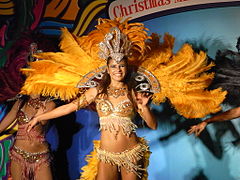 African American dance developed in everyday spaces, rather than in dance studios, schools or companies. Tap dance, disco, jazz dance, swing dance, hip hop dance, the lindy hop with its relationship to rock and roll music and rock and roll dance have had a global influence.

Dance has played an important role in forging a collective identity among the many cultural and ethnic groups of Latin America.[22] Dance served to unite the many African, European, and indigenous peoples of the region.[20] Certain dance genres, such as capoeira, and body movements, especially the characteristic quebrada or pelvis swing, have been variously banned and celebrated throughout Latin American history.[22]

Dance studies are offered through the arts and humanities programs of many higher education institutions. Some universities offer Bachelor of Arts and higher academic degrees in Dance. A dance study curriculum may encompass a diverse range of courses and topics, including dance practice and performance, choreography, ethnochoreology, kinesiology, dance notation, and dance therapy. 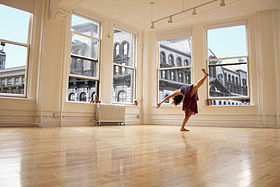 A dancer practices in a dance studio, the primary setting for training in classical dance and many other styles

Professional dancers are usually employed on contract or for particular performances or productions. The professional life of a dancer is generally one of constantly changing work situations, strong competitive pressure and low pay. Consequently, professional dancers often must supplement their incomes to achieve financial stability. In the U.S. many professional dancers belong to unions (such as the American Guild of Musical Artists, Screen Actors Guild and Actors' Equity Association) that establish working conditions and minimum salaries for their members.

Dance teachers typically focus on teaching dance performance, or coaching competitive dancers, or both. They typically have performance experience in the types of dance they teach or coach. For example, dancesport teachers and coaches are often tournament dancers or former dancesport performers. Dance teachers may be self-employed, or employed by dance schools or general education institutions with dance programs. Some work for university programs or other schools that are associated with professional classical dance (e.g., ballet) or modern dance companies. Others are employed by smaller, privately owned dance schools that offer dance training and performance coaching for various types of dance.

Choreographers are often university trained and are typically employed for particular projects or, more rarely may work on contract as the resident choreographer for a specific dance company. 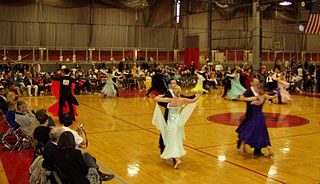 In addition, there are numerous dance competitions shows presented on television and other mass media.