The Río de la Plata (Spanish pronunciation: [ˈriːo ðe la ˈplata], River of Silver) — rendered River Plate in British English and the Commonwealth and La Plata River (occasionally Plata River) in other English-speaking countries — is the estuary formed by the confluence of the Uruguay and the Paraná rivers. It forms a funnel-shaped indentation on the southeastern coastline of South America, about 290 kilometres (180 mi) long.

The Río de la Plata widens from about 2 kilometres (1.2 mi) at the inner part to about 220 kilometres (140 mi) at its mouth.[4] It forms part of the border between Argentina and Uruguay, with the major ports and capital cities of Buenos Aires and Montevideo on its western and northern shores, respectively. The coasts of the Río de la Plata are the most densely populated areas of Argentina and Uruguay.[3] The Battle of the River Plate took place in its waters in December 1939, making it the first naval battle in the Second World War, and the first one of Battle of the Atlantic. 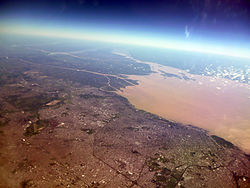 The city of Buenos Aires sits along the southern coast of the Río de la Plata.

Some geographers consider the Río de la Plata a gulf or marginal sea of the Atlantic Ocean, while others consider it a river.[3] For those who regard it to be a river, it is the widest in the world, with a maximum width of about 220 kilometres (140 mi) and a total surface area of about 35,000 square kilometres (14,000 sq mi).[3]

The Río de la Plata behaves as an estuary in which freshwater and seawater mix. Its freshwater comes from the Paraná River, one of the world's longest and the Río's main tributary, as well as from the Uruguay River and other smaller streams. Currents in the Río de la Plata are controlled by tides reaching to its source and beyond, into the Uruguay and Paraná rivers.[4] Both rivers are tidally influenced for about 190 kilometres (120 mi).[3] The tidal ranges in the Río de la Plata are small, but its large width allows for a tidal prism important enough to dominate the flow regime despite the huge discharge received by the tributary rivers. The rivers' discharge is strong enough to prevent salt water from penetrating the inner Río de la Plata.[6]

A submerged shoal, the Barra del Indio, acts as a barrier, dividing the Río de la Plata into an inner freshwater riverine area and an outer brackish estuarine area.[7] The shoal is located approximately between Montevideo and Punta Piedras (the northwest end of Samborombón Bay). It is the freshwater of the inner area that causes many to describe the Río de la Plata as a river.[4] The depth of the inner fluvial zone is between about 1 to 5 metres (3.3 to 16.4 ft). It is about 180 kilometres (110 mi) long and up to 80 kilometres (50 mi) wide. The depth of the outer estuary zone increases from 5 to 25 metres (16 to 82 ft).[7]

The Río de la Plata is a salt wedge estuary. Saltwater, being denser than freshwater, penetrates into the estuary in a layer below the freshwater, which floats on the surface. Salinity fronts, or haloclines, form at the bottom and on the surface, where fresh and brackish waters meet. The salinity fronts are also pycnoclines due to the water density discontinuities. They play an important role in the reproductive processes of fish species.[7]

The western limit is on the confluence of the Uruguay River at Punta Gorda, Colonia. 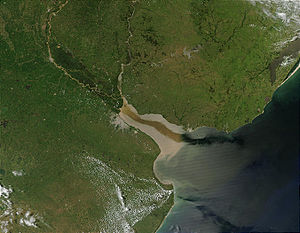 Satellite image of the Paraná and Uruguay rivers emptying into the Río de la Plata. Due to the relatively calm surface of the estuary and the angle of the Sun relative to the satellite, the current of the river flowing out into the Atlantic is visible.

The Río de la Plata basin is the second largest drainage basin in South America. At a size of about 3,170,000 square kilometres (1,220,000 sq mi), the basin is about one fourth of the continent's surface.[5] It includes areas of southeastern Bolivia, southern and central Brazil, the entire nation of Paraguay, most of Uruguay, and northern Argentina. The main rivers of the La Plata basin are the Paraná, one of the longest in the world, and its main tributary, the Paraguay River, and the Uruguay River.[7]

The rivers of the La Plata Basin carry an estimated 57,000,000 cubic metres (2.0×109 cu ft) of silt into the Río de la Plata each year, where the muddy waters are stirred up by winds and tides. The shipping route from the Atlantic to Buenos Aires is kept open by constant dredging. 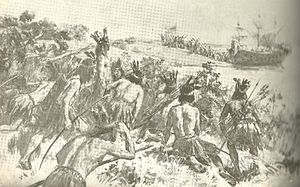 Discovery of the Río de la Plata by Juan Díaz de Solís. He would be attacked and killed by Charrúas later.

The Río de la Plata was first explored by the Portuguese in 1512–13.[8][9] The Spanish first explored it in 1516, when the navigator Juan Díaz de Solís traversed it during his search for a passage between the Atlantic and the Pacific Oceans, naming it the Mar Dulce, or fresh water sea.[3] The Portuguese navigator Ferdinand Magellan briefly explored the estuary in 1520 before his expedition continued its circumnavigation,[3] and in 1521 Cristóvão Jacques also explored the Plate River estuary and ascended for the first time the Parana River, entering it for about 23 leagues (around 140 km), to near the present city of Rosario.[10]

Sebastian Cabot made a detailed study of the area and renamed it Río de la Plata. He explored the Paraná and Uruguay rivers between 1526 and 1529. He ascended the Paraná as far as the present-day city of Asunción, and also explored up the Paraguay River. Trading with the Guaraní near today's Asunción, Cabot acquired silver trinkets, and these objects gave rise to the name Río de la Plata, "river of silver".[3]

The area was visited by Francis Drake's fleet in early 1578, in the early stages of his circumnavigation.[11]

The first European colony was the city of Buenos Aires, founded by Pedro de Mendoza on 2 February 1536. However, it was quickly abandoned. It was refounded by Juan de Garay on 11 June 1580. The failure to establish a settlement on the estuary led to explorations upriver and the founding of Asunción in 1537.[3]

Conflict in the region intensified after the independence of the former Spanish and Portuguese colonies in the first quarter of the 19th century. Interests in the territories and the navigation rights over the Platine region played a major role in many armed conflicts throughout the century, including the Argentine civil wars, the Cisplatine and Platine wars, and the Paraguayan War.[3] The river was blockaded by extra-regional powers 1838–1840 and 1845–1850.

Battle of the River Plate

In the first naval battle of the Second World War the German pocket battleship Admiral Graf Spee was engaged by the Royal Navy (RN) cruisers, HMS Exeter, Ajax and Achilles[12] off the estuary of the River Plate in December 1939. The German ship retired up the estuary with a crippled fuel system and put into port at Montevideo. A few days later, rather than fight outgunned, she was scuttled in the estuary.

The English name "River Plate" is not, as sometimes thought, a mistranslation, as "plate" was used extensively as a noun for "silver" or "gold" from the 12th century onwards, especially in Early Modern English[13] and the estuary has been known as the River Plate or Plate River in English since at least the time of Francis Drake.[14] A modern translation of the Spanish Río de la Plata is "Silver River", referring not to color but to the riches of the fabled Sierra de la Plata thought to lie upstream.

The English version of the name served as an inspiration for one of Argentina's most important football clubs, Club Atlético River Plate.

The Río de la Plata is a habitat for the loggerhead sea turtle, green sea turtle, leatherback sea turtle, the rare La Plata dolphin, and many species of fish.