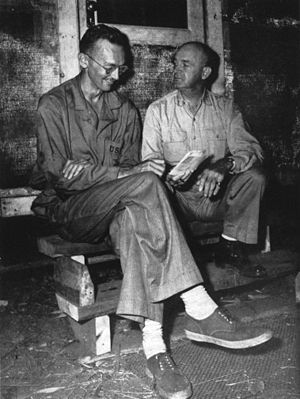 Richard William Tregaskis (November 28, 1916 – August 15, 1973) was an American journalist and author whose best-known work is Guadalcanal Diary (1943), an account of just the first several weeks (in August - September 1942) of the U.S. Marine Corps invasion of Guadalcanal in the Solomon Islands during World War II. This was actually a six-month-long campaign. Tregaskis served as a war correspondent during World War II, the Korean War, and the Vietnam War.

Born in Elizabeth, New Jersey, Tregaskis attended the Pingry School in Elizabeth and the Peddie School in Hightstown, New Jersey before going to college at Harvard University.[1] Prior to World War II he worked as a journalist for the Boston American Record newspaper. His family name is of Cornish origin.

Shortly after the U.S. entered World War II, Tregaskis volunteered as a combat correspondent representing the International News Service. (In fact, Tregaskis was one of only two journalists on location at Guadalcanal.)

Assigned to cover the war in the Pacific, Tregaskis spent part of August and most of September, 1942 reporting on Marines on Guadalcanal, a pivotal campaign in the war against Japan. He subsequently covered the war in Europe against Germany and Italy.

Tregaskis' most renowned book, Guadalcanal Diary, recorded his experiences with the Marines on Guadalcanal. As the jacket of the book's first edition noted, "This is a new chapter in the story of the United States Marines. Because it was written by a crack newspaperman, who knew how to do his job. . . . Until the author's departure in a B-17 bomber on September 26th, he ate, slept, and sweated with our front-line units. His story is the straight day-by-day account of what he himself saw or learned from eyewitnesses during those seven weeks."[2]

As a testimony to the power of Tregaskis' writing, Guadalcanal Diary is still considered essential reading by present-day U.S. military personnel. (A modern edition is available with an introduction by Mark Bowden, author of Black Hawk Down.) The diary was later made into a film of the same title in 1943.

Tregaskis later covered Cold War-era conflicts in China, Korea, and Vietnam. During the Vietnam War, Tregaskis reported on the growing conflict for a decade and accompanied U.S. Marines in command of local ARVN troops.

Tregaskis' second wife, Moana, followed him to Vietnam, where she put her skills to work as an anthropologist, photographing and documenting the impact of war on soldiers and civilians alike.[3]

In 1964, the Overseas Press Club presented Tregaskis with the George Polk Award for first-person reporting under hazardous circumstances. A shrapnel-gouged helmet worn by Tregaskis during World War II is on display at the National Museum of the Marine Corps. Tregaskis was wearing the helmet in Italy in 1943 when a shell fragment pierced the helmet and his skull, nearly killing him.[4]

Tregaskis died at age 56 near his home in Hawaii as a result of drowning.

The Richard Tregaskis papers are on file in the American Heritage Center at the University of Wyoming in Laramie.[5]