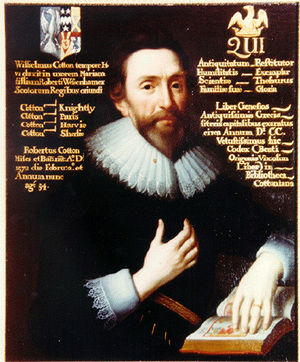 Sir Robert Bruce Cotton, 1st Baronet (22 January 1570/1 – 6 May 1631) was an English antiquarian, member of parliament and founder of the Cotton library.

Of Huntingdonshire parents, Cotton was educated at Westminster School, and at Jesus College, Cambridge, where he graduated BA in 1585.[1] He began to amass a library in which the documents rivalled, then surpassed, the royal manuscript collections.

Cotton entered the Parliament of England as MP for Newtown, Isle of Wight in 1601 and as knight of the shire for Huntingdonshire in 1604. He helped devise the institution of the title baronet as a means for King James I to raise funds: like a peerage, a baronetcy could be inherited but, like a knighthood, it gave the holder no seat in the House of Lords. Despite an early period of goodwill with King James, during which Cotton was himself made a baronet, his approach to public life, based on his immersion in old documents, was essentially based on that "sacred obligation of the king to put his trust in parliaments" which in 1628 was expressed in his monograph The Dangers wherein the Kingdom now standeth, and the Remedye. From the Court party's point of view, this was anti-royalist in nature, and the king's ministers began to fear the uses being made of Cotton's library to support parliamentarian arguments: it was confiscated in 1630 and returned only after his death to his heirs.

Robert Bruce Cotton was born 22 January 1571 in Denton, Huntingdonshire, England to Thomas Cotton (1544–1592) and his first wife, Elizabeth. Cotton attended Westminster School, where he was a pupil of William Camden. While at Westminster, Cotton began antiquary studies under the influence of Camden. He began collecting notes on the history of Huntingdonshire when he was seventeen.[2] Cotton graduated with a BA from Jesus College, Cambridge in 1585 and then attended Middle Temple in 1589. He married Elizabeth Brocas who gave birth to a son, Thomas Cotton (1594–1662) in 1594.[3] 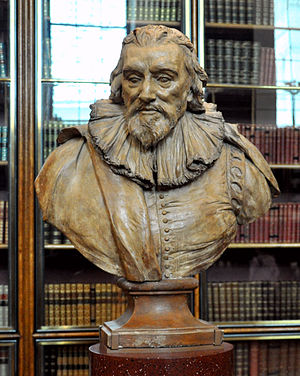 A bust of Robert Cotton by Louis-François Roubiliac

Robert Cotton became Robert Bruce Cotton in support of James VI of Scotland’s claim to succeed Elizabeth I (Matthew 625). Cotton was also Scottish and fully supported an English union with Scotland (Matthew 625). After the death of queen Elizabeth I, Robert Cotton was commissioned to write a work defending the claim of James I's claim to the throne. This action helped in gaining Cotton's knighthood in 1603 (Matthew 625). Cotton took the parliamentary seat that previously belonged to his grandfather in 1604. Cotton represented the county of Huntingdonshire. Cotton worked on the committee on grievances. In 1605–06 Cotton received the bill pertaining to the Gunpowder Plot through his work on the committee of privileges. The following year Cotton was reappointed to the committee of privileges. Cotton was appointed to the joint conference with the Lords during his work on the bill pertaining to the full union between Scotland and England in 1606–07. In 1610 Cotton was nominated in first place to the committee of privileges (Matthew 626). In 1610 or 1611 the royal revenues were low. Cotton wrote, ‘Means for raising the king’s estate.’ In this work Cotton he suggested the formation of a new higher order. This social standing would be higher than the knight but lower than the baron. In 1614 Cotton did not receive a seat in Parliament. In 1621 Robert Cotton advised James I on the impeachment of Sir Francis Bacon and the role of the king and what Parliament could decide on its own. In 1624 Cotton received a seat on Parliament for Old Sarum, because Sir Arthur Ingram decided to sit for York (Matthew 627). [4]

The Society of Antiquaries

According to the Oxford Dictionary of National Biography, Cotton reunited with former teacher William Camden in the late 1580s as an early member of the Society of Antiquaries in London. Camden was one of the greatest early antiquaries whose work Britannia (1586) was an account of early Britain.[5] There is little evidence proving Cotton's influence in the society until after his father's death in 1592. Cotton was however living in his family's castle in Conington, Huntingdonshire during 1593 where he was involved in reconstructing the castle. He returned to London in 1598 and revived the society. With the society, he petitioned for a permanent academy for the study of antiquary founded by Queen Elizabeth. This petition suggested that Cotton's collection of manuscripts be combined with the Queen's library to form a national library. The plans did not receive royal approval.[3] The discussion of the society in the summer of 1600 focused burial customs most likely due to Camden and Cotton's recent visit to Hadrian's Wall in Northern England. The wall served as a defence in Roman Britain under the emperor Hadrian.[5] Camden and Cotton collected Roman coins, fossils and monuments during their trip. The trip most likely lead to Cotton's interest in Roman artefacts. The antiquaries Reginald Bainbridge and Lord William Howard offered Cotton Roman stones while the Essex antiquary John Barkham arranged to send him Roman relics.[5]

Cotton's antiquarian studies were influential to many people of the time period. He was often looked upon by other antiquaries for ideas. Below is a letter written by fellow antiquary Roger Dodsworth to Cotton asking for advice:

Honble- Sr
With my due acknowledgement of your multiplied favours presupposed, I thought good to advertise you that, since I saw you, I have used such meanes, as my health would permitt, to enquire after such things as you desired. I have beene att Cattericke wher I was informed of 2Romaine monuments weh were found in a 1620 and are now in my Io: of Arundells keeping. I have found, a peece of a round piller, att Ribblccester, being almost half a yeard thick, and half an ell in height, with such letters, on the one side thereof, as I have figured in this paper inclosed. I saw, ther, a little table of free stone, not half a yeard square, with the portraitures of 3 armed men cutt therin, but no inscription att all theron. I saw likewise 2 other stones of the nature of slate, or thicke flaggs some yeard square, with fretted antique workes engraven on them, without any letters. I shalbe very gladd that my uttmost endeavours, might availe to requite the least of many respects you have done unto me. And do desire you to signify your pleasure, what you would have mee to doo touching the premisses, and I shall not faile to do my best in effecting thereof...
Yours faythfully faythfully

The last recorded meeting of the Society of Antiquaries was in 1607.[3] Cotton, however, continued collecting.

See also List of manuscripts in the Cotton library

The Cottonian Library was the richest private collection of manuscripts ever amassed. Of secular libraries it outranked the Royal Library, the collections of the Inns of Court and the College of Arms. Cotton's house near the Palace of Westminster became the meeting-place of the Society of Antiquaries and of all the eminent scholars of England;[6] the Library was eventually donated to the nation by Cotton's grandson and now resides at the British Library.

The physical arrangement of Cotton's Library continues to be reflected in citations to manuscripts once in his possession. His library was housed in a room 26 feet (7.9 m) long by six feet wide filled with bookpresses, each with the bust of a figure from classical antiquity on top. Counterclockwise, these are catalogued as Julius (i.e., Julius Caesar), Augustus, Cleopatra, Faustina, Tiberius, Caligula, Claudius, Nero, Galba, Otho, Vitellius, Vespasian, Titus, and Domitian. (Domitian had only one shelf, perhaps because it was over the door). Manuscripts are now designated by library, bookpress, and number: for example, the manuscript of Beowulf is designated Cotton Vitellius A.xv, and the manuscript of Pearl is Cotton Nero A.x.

Role of family on the Cotton library 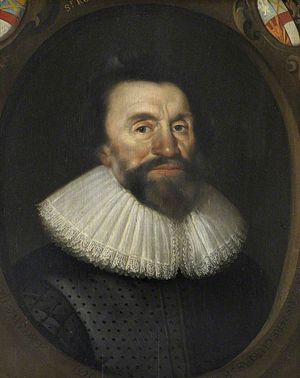 Robert Cotton in 1629, the year that he was forced to close the Cotton library by Charles I because the content within the library was believed to be harmful to the interests of the Royalists

In 1620, Thomas Cotton married Margaret Howard with whom he had his first son, Sir John Cotton, just one year later in 1621.[3] Sir Thomas Cotton's marriage with Margaret Howard ended in 1622, which had been the year that Thomas Cotton's father, Sir Robert Cotton, permanently moved residence to The Cotton House, along with the library which remained in the Cotton House until Sir Robert Cotton's death nine years later in 1631.[3] The relocation of the library and residence to the Cotton House gave members of Parliament and government workers better access to the matter within the library to be used as resources for their work.[3]

The Cotton Library offered important and valuable sources of reference and knowledge to many people, such as John Selden, "a frequent borrower from the library, and probably its protector during the civil wars" as stated in the Oxford Dictionary of National Biography.[3] Selden, in 1623 said of Cotton: “his kindness and willingness to make them [his collection of books and manuscripts] available to students of good literature and affairs of state".[7] In keeping with the notion that John Selden was a common presence in the Cotton library, The British Library holds a list of thirteen works, and the locations of those volumes today, that had been lent to Seldon by Sir Robert Cotton.[8]

On 12 September 1702, Sir John Cotton died.[3] Prior to his death, Sir John Cotton had arranged for the Cotton Library to be bought for Britain through acts of Parliament.[3] If the library had not been sold to the nation, despite his grandfather Sir Robert Cotton's wish, the library would have been taken over and inherited by John Cotton's two grandsons, whom, unlike the rest of the college-educated Cotton family, had been illiterate and putting the Cotton Library at risk of potentially getting broken up and sold to different divisions within the family.[3] 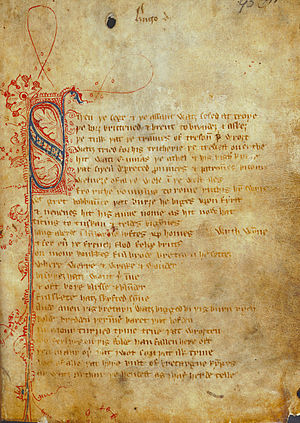