The Royal Canadian Navy (RCN) (French: Marine royale canadienne), is the naval force of Canada. The RCN is one of three environmental commands within the unified Canadian Armed Forces. As of 2015[update] Canada's navy operates 1 destroyer, 12 frigates, 4 patrol submarines, 12 coastal defence vessels and 8 unarmed patrol/training vessels, as well as several auxiliary vessels. The Royal Canadian Navy consists of 8,500 Regular Force and 5,100 Primary Reserve sailors, supported by 5,300 civilians.[a 1] Vice-Admiral Mark Norman is the current Commander of the Royal Canadian Navy and Chief of the Naval Staff.[a 2]

Founded in 1910 as the Naval Service of Canada and given Royal Sanction on 29 August 1911,[1] the Royal Canadian Navy was amalgamated with the Royal Canadian Air Force and the Canadian Army to form the unified Canadian Armed Forces in 1968, after which it was known as "Maritime Command" until 2011 when the title of RCN was restored. Over the course of its history, the RCN served in the First and Second World Wars, the Korean War, the Persian Gulf War, the War in Afghanistan and numerous United Nations peacekeeping missions and NATO operations.

Established following the introduction of the Naval Service Bill by then Prime Minister Sir Wilfrid Laurier, the Naval Service of Canada (NSC) was intended as a distinct naval force for the Dominion, that, should the need arise, could be placed under British control. The bill received royal assent on 4 May 1910. Initially equipped with two former Royal Navy vessels, HMCS Niobe and HMCS Rainbow, the service was renamed Royal Canadian Navy by King George V on 29 August 1911.[2] 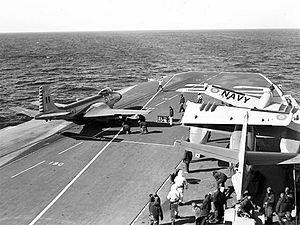 An F2H-3 Banshee is waiting to be catapulted from HMCS Bonaventure in 1957; a CS2F Tracker sits parked on deck alongside.

During the first years of the First World War, the RCN's six-vessel naval force patrolled both the North American west and east coasts to deter the German naval threat, with a seventh ship, HMCS Shearwater joining the force in 1915. Just before the end of the war in 1918, the Royal Canadian Naval Air Service was established with the purpose of carrying out anti-submarine operations; however, it was disbanded after the armistice of 11 November.[3]

After the war, the Royal Canadian Navy took over certain responsibilities of the Department of Transport's Marine Service, and slowly started to build its fleet, with the first warships specifically designed for the RCN being commissioned in 1932.[4] At the outbreak of the Second World War, the Navy had 11 combat vessels, 145 officers and 1,674 men.[5] During the Second World War, the Royal Canadian Navy expanded significantly, ultimately gaining responsibility for the entire Northwest Atlantic theatre of war. By the end of the war, the RCN had become the fifth-largest navy in the world after the United States Navy, the Royal Navy, the Imperial Japanese Navy, and the Soviet Navy, with over 300 vessels. During the Battle of the Atlantic, the RCN sank 31 U-boats and sank or captured 42 enemy surface vessels, while successfully completing 25,343 merchant crossings. The Navy lost 24 ships and 1,797 sailors in the war.[6]

From 1950 to 1955, during the Korean War, Canadian destroyers maintained a presence off the Korean peninsula, engaging in shore bombardments and maritime interdiction. During the Cold War, the Navy developed an anti-submarine capability to counter the growing Soviet naval threat.[8][9] In the 1960s, the Royal Canadian Navy retired most of its Second World War vessels, and further developed its anti-submarine warfare capabilities by acquiring the Sikorsky CH-124 Sea King, and successfully pioneered the use of large maritime helicopters on small surface vessels. At that time, Canada was also operating an aircraft carrier, HMCS Bonaventure, flying the McDonnell F2H Banshee fighter jet until 1962, as well as various other anti-submarine aircraft.[3] 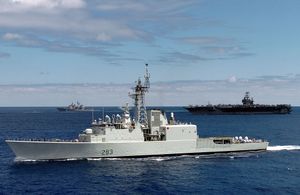 HMCS Algonquin operating in formation with the US Navy aircraft carrier USS John C. Stennis and a Ticonderoga-class cruiser in 2004.

In 1968, under the Liberal government of Lester B. Pearson, the Royal Canadian Navy, Royal Canadian Air Force and Canadian Army were amalgamated to form the unified Canadian Forces. This process was overseen by then–Defence Minister Paul Hellyer. The controversial merger resulted in the abolition of the Royal Canadian Navy as a separate legal entity. All personnel, ships, and aircraft became part of Maritime Command (MARCOM), an element of the Canadian Armed Forces. The traditional naval uniform was eliminated and all naval personnel were required to wear the new Canadian Armed Forces rifle green uniform, adopted also by former Royal Canadian Air Force and Canadian Army personnel. Ship-borne aircraft continued to be under the command of MARCOM, while shore-based patrol aircraft of the former Royal Canadian Air Force were transferred to MARCOM. In 1975 Air Command was formed and all maritime aircraft were transferred to Air Command's Maritime Air Group. The unification of the Canadian Forces in 1968 was the first time that a nation with a modern military combined its formerly separate naval, land and air elements into a single service.

The 1970s saw the addition of four Iroquois-class destroyers, which were later updated to air-defence destroyers, and in the late 1980s and early 1990s the construction of twelve Halifax-class frigates. In 1990, Canada deployed three warships to support the Operation Friction. Later in the decade, ships were deployed to patrol the Adriatic Sea during the Yugoslav Wars and the Kosovo War. More recently, Maritime Command provided vessels to serve as a part of Operation Apollo and to combat piracy off the coast of Somalia.

As of August 2015, with the loss of command-and-control and resupply capabilities, the RCN is classified as a Rank 5 navy (offshore regional coastal defence) on the Todd-Lindberg classification system of naval strength, dropping from Rank 3 (multiregional power projection) in 2005.[10] 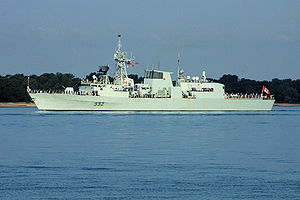 The Atlantic Fleet, with 18 warships and a number of auxiliary vessels, is responsible for Canada's Exclusive Economic Zone on the East Coast, as well as Canada's Area of Responsibility in the Atlantic Ocean and the eastern Arctic Ocean. 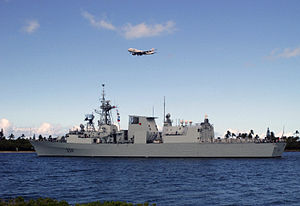 The Naval Reserve Headquarters (NAVRESHQ), located at the Pointe-a-Carcy Naval Complex in Quebec City, is responsible for twenty four Naval Reserve Divisions across the country. The base is also home to Canadian Forces Fleet School Quebec and HMCS Montcalm. The Naval Reserve is composed of 4,000 reservists.[a 5] 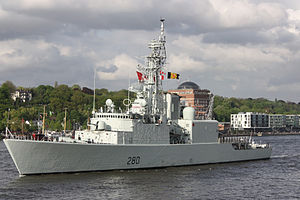 The Navy operates 1 destroyer, 12 frigates, 4 patrol submarines, 12 coastal defence vessels and 8 unarmed patrol/training vessels. The surface ships, which carry the designation Her Majesty's Canadian Ship (HMCS), consist of one Iroquois-class destroyer, twelve Halifax-class multi-role patrol frigates and 12 Kingston-class coastal defence vessels. In addition to the surface vessels, the RCN owns four Victoria-class submarines that were acquired from the Royal Navy in 1998. These warships carry the designation Her Majesty's Canadian Submarine. The Royal Canadian Navy also maintains and operates HMCS Oriole, a historic sailing ship commissioned in 1952 as a sail training ship. Oriole is the oldest commissioned ship in the RCN and carries the royal designation and the battle honour Dunkirk, 1940.

On September 19, 2014, the Navy announced the decommissioning of its two resupply ships (HMCS Protecteur and HMCS Preserver), along with two destroyers (HMCS Algonquin and HMCS Iroquois). This leaves the Navy with a single destroyer - HMCS Athabaskan.[11] However Athabaskan has been plagued with engine problems, suffering multiple failures during while transiting the Atlantic Ocean, first in February 2015,[12] then again in October.[13]

The RCN operates auxiliary vessels to support the Canadian Forces. These vessels are not warships and do not carry the HMCS designation. Among the auxiliary ships operated by the Navy are eight Orca-class patrol class training tenders, five Ville-class harbour tugs, five Glen-class harbour tugs, and two fireboats of the Fire class.

Main article: List of aircraft of the Royal Canadian Navy 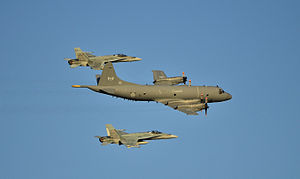 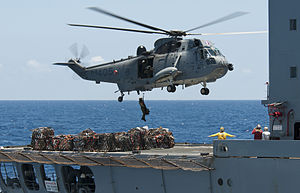 A CH-124 Sea King lowers a crewman onto the deck of USNS Yukon during RIMPAC 2012.

Since 1975, all aircraft supporting the RCN are operated by the Royal Canadian Air Force through 1 Canadian Air Division. Since 1995, all CH-124 Sea King helicopters have been operated by squadrons under 12 Wing (from Shearwater Heliport and Patricia Bay Heliport). Similarly, all CP-140 Aurora and CP-140A Arcturus anti-submarine, ship surveillance and maritime patrol aircraft have been operated by squadrons under 14 Wing at CFB Greenwood and 19 Wing at CFB Comox. There are currently 27 CH-124 Sea King helicopters configured for ship-borne anti-submarine warfare, 18 CP-140 Aurora fixed wing aircraft for land-based anti-submarine warfare and area surveillance (of which 14 are being modernized and retained for active operations), and 1 CP-140A Arcturus for land-based maritime surveillance.

During the past several years, the following major projects have been announced by the Government of Canada to modernize the Canadian Navy: 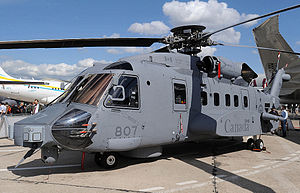 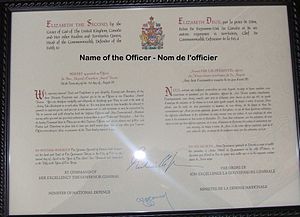 Commissioned officers of the Canadian Armed Forces have ranks ranging from the NATO standard ranks of OF-1 to OF-9. The only OF-9 position in the Canadian Forces is the Chief of the Defence Staff, who can be from any of the three elements. The highest position occupied in the current Royal Canadian Navy structure is OF-8, a vice-admiral who serves as the Commander of the Royal Canadian Navy and Chief of the Naval Staff. OF-6 (commodore) to OF-9 (admiral) are referred to as flag officers, OF-3 (lieutenant-commander) to OF-5 (captain (N)) are referred to as senior officers, while OF-2 (lieutenant (N)) and OF-1 (sub-lieutenant) are referred to as junior officers. Naval cadets are referred to as subordinate officers.[a 10] All except subordinate officers of the Canadian Forces receive a commission from the Queen of Canada as Commander-in-Chief of the Canadian Armed Forces. The commissioning scroll issued in recognition of the commission is signed by the Governor General of Canada as the Queen of Canada's representative, and countersigned by the serving Minister of National Defence. Subordinate officers are promoted to acting sub-lieutenant upon receiving their commissions.

Naval officers are trained at the Royal Military College of Canada in Kingston, Ontario, the Royal Military College Saint-Jean in Saint-Jean, Quebec, the Naval Officer Training Centre Venture in Work Point, Esquimalt, British Columbia and Canadian Forces Naval Engineering School in Halifax, Nova Scotia. Some specialized candidates may be commissioned without attending the Royal Military College; the plan is known as Direct-Entry Officer (DEO) Plan. Senior NCOs may also be offered commissions on the basis that their training and experience gives them a comparable basis of knowledge; this is referred to as the Commission-from-the-Ranks (CFR) Plan. NCOs who are offered such promotions are typically petty officer 1st class or higher, with 20 or more years of service.

The Royal Canadian Navy rank structure is shown below.

The Queen's or King's Ceremonial colours (also referred to as the Sovereign's Colour) for the navy have been consecrated and presented four times: in 1939 by King George VI in Esquimalt, BC, in 1959 by Queen Elizabeth II and Prince Phillip in Halifax, NS, in 1979 by the Queen Mother in Halifax, NS and in 2009 by the Governor General of Canada and Commander-in-Chief Michaëlle Jean in Halifax, NS.[23] On each occasion two identical colours were presented, one for the Atlantic fleet and one for the Pacific fleet. The current colours consist of a ceremonial standard with the Maple Leaf flag in the top left canton, the monarch's royal cypher for Canada (a capital E on a blue background, surrounded by a circlet of gold Tudor roses and laurels, surmounted by a crown) and an anchor (from the Royal Canadian Navy's naval jack) on the lower right fly. These elements are found on the 1979 and 2009 colours. The colours from 1959 and 1939 consisted of a Royal Navy white ensign with the Queen's or King's cipher in the middle.[23]

The use of the service colours of the Royal Navy were granted to the RCN in 1925. Two service colours were sent to Halifax and Esquimalt. In 1937 they were retired, and new colours sent. The official presentation of the King's Colour was not completed until 1939.[23] The Royal Canadian Navy's retired colours are laid up at Beechwood Cemetery in Ottawa, Ontario.[23]

Badge of the Royal Canadian Navy

The badge of the Royal Canadian Navy consists of:[24]