The Second Vienna Award was the second of two territorial disputes arbitrated by Nazi Germany and Fascist Italy. Rendered on 30 August 1940, it reassigned the territory of Northern Transylvania (including all of Maramureș and part of Crișana) from Romania to Hungary.[1] 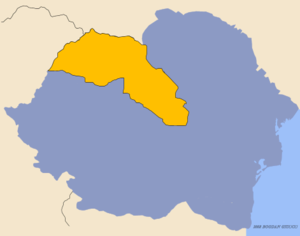 Romania in 1940, with Northern Transylvania highlighted in yellow

After World War I, the multi-ethnic Kingdom of Hungary was split apart by the Treaty of Trianon to form several new nation-states, but Hungary claimed that the new state borders did not follow the real ethnic boundaries. The new Magyar nation-state of Hungary was about a third the size of former Hungary, and millions of ethnic Magyars were to be left outside the Hungarian borders. Many historically important areas of Hungary were assigned to other countries, and the distribution of natural resources came out unevenly as well. Thus, while the various non-Magyar populations of the old Kingdom generally saw the treaty as justice for the historically-marginalized nationalities, from the Hungarian point of view the Treaty had been deeply unjust, a national humiliation and a real tragedy.

The Treaty and its consequences dominated Hungarian public life and political culture in the inter-war period. Moreover, the Hungarian government swung then more and more to the right; eventually, under Regent Miklós Horthy, Hungary established close relations with Benito Mussolini's Italy and Adolf Hitler's Germany. The alliance with Nazi Germany made possible Hungary's regaining of southern Czechoslovakia in the First Vienna Award of 1938 and Subcarpathia in 1939. But neither that nor the subsequent military conquest of Carpathian Ruthenia in 1939 satisfied Hungarian political ambitions. These awards allocated only a fraction of the territories lost by the Treaty of Trianon, anyway the loss that the Hungarians resented the most was that of Transylvania ceded to the Romanians.

At the end of June 1940, the Romanian government gave in to a Soviet ultimatum, and finally allowed Moscow to take over both Bessarabia and Northern Bukovina, which were incorporated into Romania after World War I, and Hertza region. Though the territorial loss was undesirable from its perspective, the Romanian government preferred it rather than a military conflict which could have arisen had Romania resisted Soviet advances, given that Finland had just ceded territories after its war with the Soviets. However, the Hungarian government interpreted the fact that Romania gave up some areas finally as an admission that it no longer insisted on keeping its national territory intact under pressure. Thus, the Soviet occupation of Bessarabia and Northern Bukovina inspired Budapest to escalate its efforts to resolve "the question of Transylvania". Hungary hoped to gain as much of Transylvania as possible, but the Romanians would have none of that and submitted only a small region for consideration. Eventually, the Hungarian-Romanian negotiations fell through entirely. After this, the Romanian government asked Italy and Germany to arbitrate.

Meanwhile, the Romanian government had acceded to Italy's request for territorial cessions to Bulgaria, another German-aligned neighbor. On 7 September, under the Treaty of Craiova, the "Cadrilater" (southern Dobrudja) was ceded by Romania to Bulgaria. 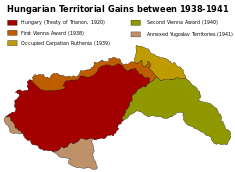 On 1 July 1940, Romania repudiated the Anglo-French guarantee of 13 April 1939, now worthless in light of France's collapse. The next day Carol II addressed a letter to Hitler suggesting Germany send a military mission to Romania and renew the alliance of 1883. Germany used Romania's new desperation to force a settlement of the territorial disputed produced by the Paris Peace Conference of 1919 in favour of Germany's old allies: Hungary and Bulgaria. In an exchange of letters between Carol and Hitler (5–15 July), the Romanian king insisted that no territorial exchange occur without a population exchange, while the German leader based German goodwill towards Romania on the latter's good relations with Hungary and Bulgaria.[2] The Romanian foreign minister at the time was Mihail Manoilescu and the German minister plenipotentiary in Bucharest was Wilhelm Fabricius. In accordance with German wishes, Romania began negotiations with Hungary at Turnu Severin on 16 August.[3] The initial Hungarian claim was 69,000 km² of territory with 3,803,000 inhabitants, almost two thirds Romanian. Talks were broken off on 24 August. The German and Italian governments then proposed an arbitration, a proposal characterised in the minutes of the Romanian crown council of 29 August as "communications with an ultimative character made by the German and Italian governments".[3] The Romanians accepted and Foreign Ministers Joachim von Ribbentrop of Germany and Galeazzo Ciano of Italy met on 30 August 1940 at the Belvedere Palace in Vienna. The two powers reduced the Hungarian demands to 43,492 km² with a population of 2,667,007. A Romanian crown council met overnight on 30–31 August to accept the arbitration. At the meeting, Iuliu Maniu demanded that Carol II abdicate and the Romanian army resist any Hungarian effort to take over northern Transylvania. His demands were pragmatically rejected.[3] 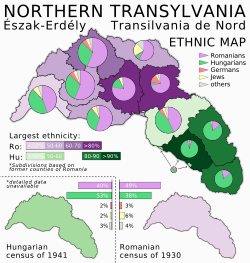 The 1930 Romanian census registered for this region a population of 2,393,300. In 1941 the Hungarian authorities conducted a new census which registered a total population of 2,578,100. Both censuses asked separately about language and nationality. The results of the two censuses are summarized in the following table.

As Árpád E. Varga writes, "the census conducted in 1930 met international statistical requirements in every respect. In order to establish nationality, the compilers devised a complex criterion system, unique at the time, which covered citizenship, nationality, native language (i.e. the language spoken in the family) and religion."

Apart from the natural population growth, the differences between the two censuses are due to some other complex reasons, like migration and assimilation of Jews or bilingual speakers. According to Hungarian registrations, 100 thousand Hungarian refugees had arrived in Hungary from South Transylvania by January 1941. Most of them sought refuge in the north, and almost as many persons arrived from Hungary in the re-annexed territory as moved to the Trianon Hungary territory from South Transylvania. As a result of these migrations, North Transylvanian Hungarians increased by almost 100 thousand. In order to compensate for this, a great number of Romanians were obliged to leave North Transylvania. Some 100 thousand had left by February 1941 according to the incomplete registration of North Transylvanian refugees carried out by the Romanian government. Besides this, a fall in the total population suggests that a further 40 to 50 thousand Romanians moved from North to South Transylvania (including refugees who were omitted from the official registration for various reasons). The Hungarian assimilation gain is made up of losses on the part of other groups of native speakers, such as the Jewish people. The changing of language was most typical among bilingual Romanians and Hungarians. On the other hand, in Maramureș (Hungarian: Máramaros) and Satu Mare (Hungarian: Szatmár) counties, in dozens of settlements many of those who had declared themselves as Romanian now identified themselves as Hungarian, even though they did not speak Hungarian at all (nor did they in 1910).

Far from settling matters, the Vienna Award had exacerbated relations between Romania and Hungary. It did not solve the nationality problem by separating all Magyars from all Romanians. Some 1,150,000 to 1,300,000 Romanians, or 48 per cent to over 50 per cent of the population of the ceded territory, depending upon whose statistics are used, remained north of the new frontier, while about 500,000 Magyars (other Hungarian estimates go as high as 800,000, Romanian as low as 363,000) continued to reside in the south.

Romania had 14 days to evacuate concerned territories and assign them to Hungary. The Hungarian troops stepped across the Trianon borders on 5 September. The Regent of Hungary, Miklós Horthy, also attended in the entry. They reached the pre-Trianon border, completing the re-annexation process, on 13 September.

Generally, the ethnic Hungarian population welcomed the troops and regarded separation from Romania as liberation. The large ethnic Romanian community that found themselves under Hungarian Horthyist occupation had nothing to celebrate though, as for them the Second Vienna Award represented the return to the times of the long Hungarian rule. Upon entering the awarded territory the Hungarian Army committed massacres against the Romanian population. Among the massacres:

The exact number of casualties is disputed between some historians, but the existence of such events cannot be disputed.

The retreat of the Romanian army was also not free from incidents, mostly consisting of damaging the infrastructure and destroying public documents.

The Second Vienna Award was voided by the Allied Commission through the Armistice Agreement with Romania (12 September 1944) whose Article 19 stipulated the following:

The Allied Governments regard the decision of the Vienna award regarding Transylvania as void and are agreed that Transylvania (the greater part thereof) should be returned to Romania, subject to confirmation at the peace settlement, and the Soviet Government agrees that Soviet forces shall take part for this purpose in joint military operations with Romania against Germany and Hungary.

This came after King Michael's Coup following which Romania changed sides and joined the Allies. Thus, the Romanian army fought Nazi Germany and its allies in Romania, regaining Northern Transylvania, and further on, in German occupied Hungary and Czechoslovakia (e.g. Budapest Offensive & Siege of Budapest and Prague Offensive).

The 1947 Treaty of Paris reaffirmed the borders between Romania and Hungary, as originally defined in Treaty of Trianon, 27 years earlier.