From Infogalactic: the planetary knowledge core
Jump to: navigation, search
For other uses, see Semiramis (disambiguation). 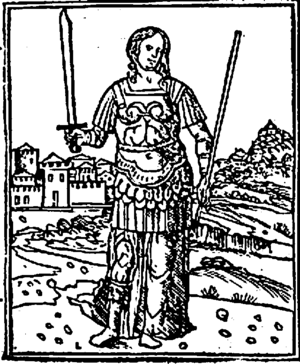 Semiramis (Assyrian;ܫܲܡܝܼܪܵܡ Shamiram, /sɛˈmɪrəməs/; Greek: Σεμίραμις, Armenian: Շամիրամ Shamiram) was the legendary[1] wife of King Ninus, succeeding him to the throne of Assyria.

The legends narrated by Diodorus Siculus, Justin and others from Ctesias of Cnidus describe her and her relationship to King Ninus, himself a mythical king of Assyria, not attested in the Assyrian King List.

The name of Semiramis came to be applied to various monuments in Western Asia and Asia Minor, the origin of which was forgotten or unknown.[2] Nearly every stupendous work of antiquity by the Euphrates or in Iran seems to have ultimately been ascribed to her, even the Behistun Inscription of Darius.[3] Herodotus ascribes to her the artificial banks that confined the Euphrates[4] and knows her name as borne by a gate of Babylon.[5] However, Diodorus stresses that the Hanging Gardens of Babylon were built long after Semiramis.

Various places in Assyria and throughout Mesopotamia as a whole, Media, Persia, the Levant, Asia Minor, Arabia, and the Caucasus bore the name of Semiramis, but slightly changed, even in the Middle Ages, and an old name of the city of Van was Shamiramagerd (in Armenian it means created by Semiramis).

A real and historical Shammuramat (the Akkadian and Aramaic form of the name) was the Assyrian wife of Shamshi-Adad V (ruled 824 BC–811 BC), king of Assyria and ruler of the Neo-Assyrian Empire, and its regent for five years until her son Adad-nirari III came of age.[6]

The indigenous Assyrians of Iraq, northeast Syria, southeast Turkey and northwest Iran still use Semiramis as a name for female children.

Biography according to Diodorus Siculus 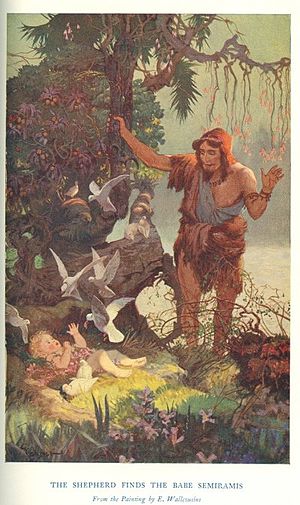 The Shepherd finds the Babe Semiramis by Ernest Wallcousins (1915).

According to the legend as related by Diodorus, Semiramis was of noble parents, the daughter of the fish-goddess Derketo of Ascalon in Syria and a mortal. Derketo abandoned her at birth and drowned herself. Doves fed the child until Simmas, the royal shepherd, found and raised her.

She then married Onnes or Menones, one of Ninus' generals. Ninus was so struck by her bravery at the capture of Bactra that he tried to compel Onnes to "yield her to him of his own accord, offering in return for this favor to give him his own daughter Sonanê to wife." When Onnes refused to exchange his wife for the king's daughter, Ninus "threatened to put out his eyes unless he at once acceded to his commands."

Onnes, out of fear of the king, and out of doomed passion for his wife, "fell into a kind of frenzy and madness," and hanged himself. Ninus then married her. [7]

She and Ninus had a son named Ninyas. After King Ninus conquered Asia, including the Bactrians, he was fatally wounded by an arrow. Semiramis then masqueraded as her son and tricked her late husband's army into following her instructions because they thought these came from their new ruler. After Ninus's death she reigned as queen regnant for 42 years, conquering much of Asia.

She restored ancient Babylon and protected it with a high brick wall that completely surrounded the city. Then she built several palaces in Persia, including Ecbatana. Diodorus also attributes the Behistun inscription to her, now known to have been done under Darius I of Persia. She not only reigned Asia effectively but also added Libya and Aethiopia to the empire. She then went to war with king Stabrobates of India, having her artisans create an army of false elephants to deceive the Indians into thinking she had acquired real elephants. This succeeded at first, but then she was wounded in the counterattack and her army again retreated west of the Indus.

The association of the fish and dove is found at Hierapolis Bambyce (Mabbog), the great temple at which, according to one legend, was founded by Semiramis,[8] where her statue was shown with a golden dove on her head.[9]

Semiramis staring at the corpse of Ara the Beautiful. Painting by Vardges Sureniants (1860-1921).

Armenian tradition portrays her as a homewrecker and a harlot. These facts are partly to be explained by observing that, according to the legends, in her birth as well as in her disappearance from earth, Semiramis appears as a goddess, the daughter of the fish-goddess Atargatis, and herself connected with the doves of Ishtar or Astartë.

One of the most popular legends in Armenian tradition involves Semiramis and an Armenian king, Ara the Beautiful. In the 20th century, the poet Nairi Zarian retold the story of Ara the Beautiful and Shamiram, in a work considered to be a masterpiece of Armenian literary drama.

According to the legend, Semiramis had heard about the fame of the handsome Armenian king Ara, and she lusted after his image. Semiramis was enamored with Ara's vigorous physical power and so sought to consummate with him. She asked Ara to marry her, but he refused; upon hearing this, she gathered the armies of Assyria and marched against Armenia.

During the battle, which may have taken place in the Ararat valley, Ara was slain by Semiramis. To avoid continuous warfare with the Armenians, Semiramis, reputed to be a sorceress, took his body and prayed to the gods to raise Ara from the dead. When the Armenians advanced to avenge their leader, she disguised one of her lovers as Ara and spread the rumor that the gods had brought Ara back to life, ending the war.[10]

Although many different versions of the legend exist, they agree that Ara never came back to life. 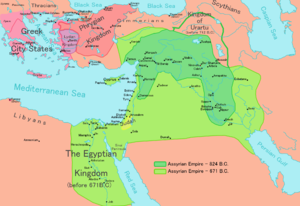 Approximate area controlled by Assyria in 824 BC (darker green)

While the achievements of Semiramis are clearly in the realm of mythical Greek historiography, the historical Assyrian queen Shammuramat (Semiramis), wife of Shamshi-Adad V of Assyria, certainly existed. After her husband's death, she served as regent from 811–806 BC for her son, Adad-nirari III.[6]

Shammuramat would have thus been briefly in control of the vast Neo Assyrian Empire, which 150 years later stretched from the Caucasus Mountains in the north to the Arabian Peninsula in the south, and western Iran in the east to Cyprus in the west.

In Shammuramat's time, however, Assyria only ruled over parts of neighboring areas in Mesopotamia, Syria, Asia Minor, and Iran.

Georges Roux speculated that the later Greek and Indo-Iranian (Persian and Median) flavoured myths surrounding Semiramis stem from successful campaigns she waged against these peoples, and the novelty of a woman ruling such an empire.[11] Some authors allow for the possibility of more than one figure named Semiramis.

And as the cranes go chanting forth their lays,
Making in air a long line of themselves,
So saw I coming, uttering lamentations,

Shadows borne onward by the aforesaid stress.
Whereupon said I: “Master, who are those
People, whom the black air so castigates?”

“The first of those, of whom intelligence
Thou fain wouldst have”, then said he unto me,
“The empress was of many languages.

To sensual vices she was so abandoned,
That lustful she made licit in her law,
To remove the blame to which she had been led.

She is Semiramis, of whom we read
That she succeeded Ninus, and was his spouse;

She held the land which now the Sultan rules.”[12]

She married her son after Ninus' death and lived with him.

Christian minister Alexander Hislop in The Two Babylons (1853)[16] claimed that Semiramis was an actual person in ancient Mesopotamia who invented polytheism and, with it, goddess worship.

Hislop believed that Semiramis was a consort of Nimrod, builder of the Bible's Tower of Babel, though Biblical mention of consorts to Nimrod is lacking.

According to Hislop, Semiramis invented polytheism in an effort to corrupt her subjects' original faith in the God of Genesis. She deified herself as Ishtar and her son as Gilgamesh, as well as various members of her court and her then deceased husband.

In support of his claim, Hislop talked about legends of Semiramis being raised by doves. He referred to the writings by the church's Ante-Nicene Fathers to suggest that these stories began as propaganda invented and circulated by Semiramis herself, so her subjects would ascribe to her the status of Queen of Heaven[citation needed] and view her child as divine.

Hislop believed Semiramis' child to be the Akkadian deity Tammuz, a god of vegetation as well as a life-death-rebirth deity.

He maintained that all divine pairings in religions e.g. Isis/Osiris, Aphrodite/Cupid, and others, are retellings of the tale of Semiramis and Tammuz, and that this was then applied to Mary/Jesus in Catholicism. The figure of Semiramis was later developed into the Blessed Virgin Mary, according to Hislop's book. Hislop used this in support of his claim that Roman Catholicism is in fact paganism.

Hislop took literary references to Osiris and Orion as "seed of woman" as evidence in support of his thesis. The legends already existing in his day about Semiramis, he claimed, were distortions of history.

Hislop's claims continue to be circulated among some fundamentalist Christians today, in the form of Jack Chick tracts,[17] comic books, and related media.

Author and conspiracy theorist David Icke also incorporates Hislop's claims about Semiramis into his book The Biggest Secret, claiming that Semiramis also had a key role in the Reptilian alien conspiracy that he asserts is secretly controlling humanity.[18]

However, Ralph Woodrow believed that Alexander Hislop was an exceptionally poor researcher who "picked, chose and mixed" portions of various unrelated myths from many different cultures.[19]