Margaret I of Denmark

From Infogalactic: the planetary knowledge core
Jump to: navigation, search
For other people of the same name, see Margaret of Denmark (disambiguation).

Margaret I (Danish: Margrete Valdemarsdatter, Norwegian: Margrete Valdemarsdatter, Swedish: Margareta Valdemarsdotter, Icelandic: Margrét Valdimarsdóttir),[upper-alpha 1] (March 1353[2] – 28 October 1412), was Queen of Denmark, Norway and Sweden and founder of the Kalmar Union, which united the Scandinavian countries for over a century. She acted as queen regnant of Denmark, although in those days it was not the Danish custom for a woman to reign.[3] Her title in Denmark was derived from her father King Valdemar IV of Denmark. She became Queen of Norway and Sweden by virtue of her marriage to King Haakon VI of Norway.

Margaret was born in March 1353.[2] as the sixth and youngest child of Valdemar IV of Denmark and Helvig of Schleswig.[4] She was baptised in Roskilde and in 1359 as a six-year-old engaged to the 18-year-old King Haakon VI of Norway, who was youngest son of the Swedish-Norwegian king Magnus IV & VII.[4] As part of the marriage contract it is presumed that a treaty was signed which meant that King Valdemar had to assist Magnus in a dispute with his second son, Eric "XII" of Sweden, who in 1356 was hailed as king there and had been given dominion over Southern Sweden.[4] Margaret's marriage was thus a part of the Nordic power struggle. There was dissatisfaction with this in some circles, and the political activist Bridget of Sweden described the agreement in a letter to the Pope as "children playing with dolls".[4] The goal of the marriage for King Valdemar was regaining Scania, which since 1332 had been mortgaged to Sweden.[5] According to contemporary chronicles the marriage contract contained an agreement to give Helsingborg Castle back to Denmark, but that was not enough for Valdemar who in June 1359 attacked with a large army across Øresund and soon had occupied Scania.[5] The attack was ostensibly to support Magnus against Erik, but in June 1359 Erik died, which meant that the balance of power changed and all agreements between Magnus and Valdemar were terminated, including the marriage contract between Margaret and Haakon.[5]

This did not get Valdemar to withdraw from Scania, but instead continued his conquests on the island of Gotland in the Baltic Sea.[5] Visby, which was populated by Germans, was the main town on the island and was the key to domination of the Baltic Sea.[5] On 27 July 1361 a battle was fought between a well-equipped Danish army and an array of local Gotland peasants. The Germans did not participate in the battle, which the Danes won, after which they took Visby.[5] King Magnus and the Hanseatic League could not disregard this provocation and a trade embargo against Denmark was immediately started and agreement reached about military action.[6] At the same time negotiations were opened between King Magnus and Henry of Holstein about a marriage between Haakon and the latter's sister Elizabeth.[6] On 17 December 1362 a ship left with Elizabeth, bound for Sweden.[6] A storm, however, saw that she ended up on the Danish island Bornholm, from where Elisabeth was taken to the archbishop of Lund, who declared that the wedding was a violation of church law because Haakon had already been engaged to Margaret.[6] The Swedish and Hanseatic armies did not have much more success and they ended up withdrawing from their siege of Helsingborg.[6] After this a truce was concluded with the Hanseatic States and King Magnus abandoned the war.[7] This meant that the marriage of the now 10-year-old Margaret and King Haakon was again relevant. The wedding was held in Copenhagen on 9 April 1363.[7]

The marriage of Haakon and Margaret should be seen as an alliance, and Margaret probably remained in Denmark for a while after the wedding,[7] but before long she was taken to Akershus in Oslo Fjord, where she was raised by Merete Ulvsdatter.[8] Merete Ulvsdatter was a distinguished noblewoman and a daughter of Bridget of Sweden, as well as the wife of Knut Algotsson, who was one of King Magnus's faithful followers.[8] According to a chronicle Margaret was brought up with Merete Ulvsdatter's daughter Ingegerd.[8] That upbringing probably emphasized religion and things Margaret should know as a woman and a queen.[8] Her academic studies were probably limited, but it is assumed that in addition to reading and writing she also was taught the general political situation.[8]

In the years after Margaret's wedding Scandinavia saw a series of major political upheavals. A few months after her wedding her only brother, Christopher, Duke of Lolland, died. This meant that Denmark was without an heir to the throne and her father without a male heir.[9] In 1364 the Swedish nobles deposed Magnus Smek and Margaret's husband King Haakon from the Swedish throne and elected Albert of Mecklenburg as king of Sweden.[8]

Her first act after her father's death in 1375 was to procure the election of her infant son Olaf as king of Denmark, despite the claims of her elder sister's Ingeborg's husband Duke Henry III of Mecklenburg and their son Albert. Margaret insisted that Olaf be proclaimed rightful heir of Sweden, among his other titles. He was too young to rule in his own right, and Margaret proved herself a competent and shrewd ruler in the years that followed. On the death of Haakon in 1380, Olaf succeeded him as King of Norway. Olaf died suddenly in 1387, aged 17, and Margaret, who had ruled both kingdoms in his name, was chosen Regent of Norway and Denmark in the following year. She had already proven her keen statesmanship by recovering possession of Schleswig from the Holstein-Rendsburg Counts. The Counts had held it for more than a generation and received it back as a fief by the Compact of Nyborg in 1386,[clarification needed (of chronology)] but under such stringent conditions that the Danish Crown received all the advantages of the arrangement. By this compact, the often rebellious Jutish nobility lost the support they had previously enjoyed in Schleswig and Holstein. Margaret, free from fear of domestic sedition, could now give her undivided attention to Sweden, where mutinous nobles were already in arms against their unpopular King Albert. Several of the powerful nobles wrote to Margaret that if she would help rid Sweden of Albert, she would become their regent. She quickly gathered an army and invaded Sweden.

At a conference held at Dalaborg Castle in March 1388, the Swedes were compelled to accept all of Margaret's conditions, elected her "Sovereign Lady and Ruler", and committed themselves to accept any king she chose to appoint. On 24 February 1389 Albert, who had called her "King Pantsless" and had returned from Mecklenburg with an army of mercenaries, was routed and taken prisoner at Aasle near Falköping, and Margaret was now the omnipotent mistress of three kingdoms. 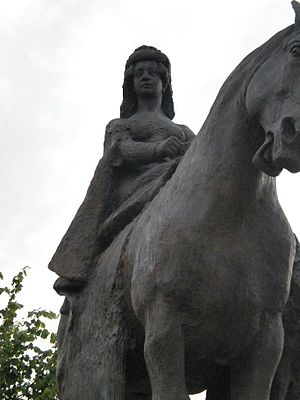 Stockholm, then almost entirely a German city, still held out. Fear of Margaret induced both the Mecklenburg princes and the Wendish towns to hasten to its assistance; and the Baltic and the North Sea speedily swarmed with the privateers of the Victual Brothers. The Hanseatic League intervened, and under the Compact of Lindholm (1395), Margaret released Albert on his promise to pay 60,000 marks within three years. Meanwhile, the Hansa were to hold Stockholm as surety. Albert failed to pay his ransom within the stipulated time, and the Hansa surrendered Stockholm to Margaret in September 1398 in exchange for commercial privileges.

It had been understood that Margaret should, at the first convenient opportunity, provide the three kingdoms with a king who was to be a kinsman of all the three old dynasties, although in Norway it was specified that she would continue ruling alongside the new king. In 1389 she proclaimed her great-nephew, Eric of Pomerania (grandson of Henry of Mecklenburg), king of Norway, having adopted him and his sister Catherine. In 1396, homage was rendered to him in Denmark and Sweden, while Margaret once again assumed the regency during his minority. To weld the united kingdoms still more closely together, Margaret summoned a congress of the three Councils of the Realm to Kalmar in June 1397, and on Trinity Sunday, 17 June, Eric was crowned King of Denmark, Norway and Sweden. The proposed Act of Union divided the three Councils, and the actual deed embodying its terms never got further than an unratified draft. Margaret balked at the clauses which insisted that each country should retain exclusive possession of its own laws and customs and be administered by its own dignitaries, because in her opinion this prevented the complete amalgamation of Scandinavia. With her usual prudence, however, she avoided every appearance of an open rupture.

A few years after the Kalmar Union, the 18-year-old Eric was declared of age and homage was rendered to him in all his three kingdoms, although Margaret was the effective ruler of Scandinavia throughout her lifetime. 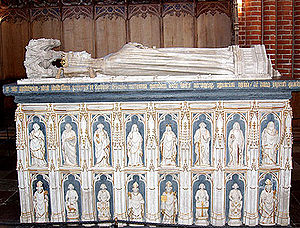 The tomb of Margaret I in Roskilde Cathedral.

So long as the union was insecure, Margaret had tolerated the presence of the Riksråd, but their influence was minor and the Royal authority remained supreme. The offices of High Constable and Earl Marshal were left vacant; the Danehof fell into ruin, and the great Queen, an ideal despot,[clarification needed] ruled through her court officials, who served as a superior kind of clerk. In any event, law and order were well maintained and the licence of the nobility was sternly repressed. The Kingdoms of Sweden and Norway were treated as integral parts of the Danish State, and national aspirations were frowned upon or checked, though Norway, being more loyal, was treated more indulgently than Sweden.

Margaret recovered for the Crown all the landed property that had been alienated in the troubled times before the reign of Valdemar IV. This so-called reduktion, or land-recovery, was carried out with the utmost rigour, and hundreds of estates fell into the hands of the crown. She also reformed the Danish currency, substituting good silver coins for the old and worthless copper tokens, to the great advantage both of herself and of the state. She always had large sums of money at her disposal, and much of it was given to charity.

In contrast with the foreign policy of her venturesome father, Margaret's was circumspect and unswervingly neutral. However, she spared no pains to recover lost Danish territory. She purchased the island of Gotland from its actual possessors, Albert of Mecklenburg and the Livonian Order, and the greater part of Schleswig was regained in the same way.

In 1402 Margaret entered into negotiations with King Henry IV of England about the possibility of a double-wedding alliance between England and the Nordic Union. The proposal was for King Eric to marry Henry's daughter Philippa, and for Henry's son, the Prince of Wales and future Henry V of England, to marry Eric's sister Catherine. The English side wanted these weddings to seal an offensive alliance that could have led the Nordic kingdoms to become involved in the Hundred Years' War against France. Margaret followed a consistent policy of not becoming involved in binding alliances and foreign wars, and therefore rejected the English proposals. However, although there was no double wedding, Eric married the 13-year-old Philippa, daughter of Henry IV of England and Mary de Bohun, at Lund on 26 October 1406, sealing a purely defensive alliance. For Eric's sister Catherine, a wedding was arranged with John, Count Palatine of Neumarkt. Margaret thus acquired a South German ally, who could be useful as a counterweight to the North German Princes and cities.

It is said that Margaret I of Denmark, who died on a boat in Flensburg Harbour, was buried on one of the Ox isles in the Flensburg Firth in 1412..[10][11]

Margaret died suddenly on board her ship in Flensburg Harbor on 28 October 1412. Her sarcophagus, made by the Lübeck sculptor Johannes Junge in 1423, is situated behind the high altar in the Roskilde Cathedral, near Copenhagen. She had left property to the Cathedral on the condition that Masses for her soul would be said regularly in the future. This was discontinued in 1536, during the Reformation, but a special bell is still rung twice daily in commemoration of the Queen.