Shaw's and Star Market are two American grocery store chains based in West Bridgewater, Massachusetts, employing about 30,000 associates in 154 stores. 132 stores are operated under the Shaw's banner in Maine, Massachusetts, New Hampshire, Rhode Island, and Vermont, while Star Market operates 22 stores in Massachusetts. Until 2010, Shaw's operated stores in all six New England states and as of 2011 Shaw's remained the only supermarket chain with stores in five of the six after it sold its Connecticut operations. The chain's largest competitors are Hannaford, Market Basket, Roche Bros., and Stop & Shop. Star Market is a companion store to Shaw's; Shaw's having purchased the competing chain in 1999.

Shaw's and Star Market are wholly owned subsidiaries of the Boise, Idaho–based Albertsons. The combined chain has the largest base of stores that operate in New England, but is the third-largest behind Quincy, Massachusetts-based Stop & Shop and Scarborough, Maine-based Hannaford Brothers Company; Hannaford operates stores in New York while Stop & Shop's operations extend into New Jersey; only Shaw's does business solely in New England.

As of July 5, 2013, Shaw's and Star Market no longer use loyalty cards at their stores, as a way to compete with other local stores that do not have them.[2]

In 1860, George C. Shaw opened a small teashop in Portland, Maine. Meanwhile, Maynard A. Davis established a group of small downtown grocery stores in Brockton and New Bedford, Massachusetts, called the Brockton Public Market (BPM) food retailers. In 1919, Davis purchased the George C. Shaw Company and made it a subsidiary of BPM. 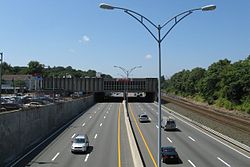 A Shaw's (now Star Market) over the Massachusetts Turnpike in Newton

As George C. Shaw and BPM continued to grow, it was decided that a central warehouse would be needed for the two companies. In 1961, a warehouse in Brockton was purchased.

By 1965, George C. Shaw had begun to expand northward, into New Hampshire. This expansion, combined with BPM's growth in southern Massachusetts, moved the companies to build a distribution center in 1972 in East Bridgewater, Massachusetts. In the 1980s, a warehouse was built in Wells, Maine, and in January 1991, Shaw's opened a distribution facility for perishable food items in Methuen, Massachusetts.

In 1978, BPM stores in Massachusetts became Shaw's Supermarkets, Inc. to maximize advertising. It was the first step towards merging the two companies.

In 1999, Shaw's made its largest acquisition by acquiring the Star Market chain. Star Market had been owned by Investcorp, which in turn purchased the chain from American Stores in 1994. American Stores had acquired Star Market through its hostile takeover of Jewel Companies, Inc. in 1984 and Jewel had acquired Star Market in 1964. The acquisition strengthened Shaw's position as the second-largest supermarket company in New England. Like Shaw's, the Star Market Company had humble beginnings, and many "firsts" in the supermarket industry. Star was the first New England supermarket to have air-conditioned stores, the touch method of ringing registers, in-store check verification, refrigerated cooked foods, self-service wrapped meats, and packaged produce.

In 2004, J Sainsbury sold Shaw's to Albertsons for US$2.48 billion. On June 2, 2006, a partnership of SuperValu, CVS Corporation, and several investment firms, including Cerberus Capital, acquired Albertsons with the intent to divvy up the parts. SuperValu received what was generally thought of as the best-performing assets, including Shaw's and Star Market, along with regional chains including ACME (Philadelphia); Jewel, and Jewel-Osco (Chicago). However, Shaw's was beset by store closings almost yearly between 2006 and 2011 during its acquisition by SuperValu.[citation needed] At its 2006 peak, Shaw's operated more than 200 stores in New England,[citation needed]; however, Shaw's footprint has been reduced except in Vermont, and has pulled out of Connecticut altogether.

The first round of closings was announced in late August 2006, when Shaw's announced it would be closing six in October. These stores were in New Britain, Southington, and Bridgeport, Connecticut; and in Worcester and New Bedford, Massachusetts.[5][6][7] In September 2007, Shaw's closed its stores in Providence and Pawtucket, Rhode Island; and Waterbury, Connecticut, because of poor sales. The closings left Shaw's with 204 stores. A total of 224 workers were laid off or transferred.

On July 25, 2009, Shaw's closed its Bristol and Shelton, Connecticut stores.[8] In early 2009, Shaw's had closed stores in Gorham, New Hampshire, and Bangor, Maine. The largest round of closings was in 2010; Shaw's announced in February that it would sell or close its 18 remaining Connecticut stores. Eleven of those were sold to New Jersey-based Wakefern, operator of ShopRite and PriceRite supermarkets; and 5 to Stop & Shop.[9] One of the remaining two ultimately also became a Stop & Shop, while the other was subdivided for a Supervalu-owned Save-A-Lot.[10] In addition to the store closures, in late March 2010, Shaw's eliminated about 4% of its full-time workforce, which amounted to nearly 650 jobs spread out over the about 120 non-union stores.

A recent round of closings was in early 2011; on January 5, Shaw's announced that three Massachusetts and two Rhode Island stores that were unprofitable would close by February 17.[11] After the closures, Shaw's was left with 169 stores.[citation needed]

In November 2012, Shaw's and its then-parent company, SuperValu, announced that Shaw's would lay off 700 employees in an effort to re-group and end financial losses. It also disclosed it had been looking for a buyer.[12]

In January 2013, Cerberus Capital Management announced a deal to acquire 877 stores in the Albertsons, ACME, Jewel-Osco, and Shaw's and Star Market chains from SuperValu for $100 million and acquisition of $3.2 billion on SuperValu debt.[13] The deal closed on March 21, 2013.

File:Map of stores owned by Albertson's in the United States.svg
Shaw's and Star Market locations in orange. Its sister chains are in blue (Albertsons), red (ACME), and purple (Jewel-Osco).

Shaw's' current[when?] store footprint extends (south to north) from the village of Wakefield in South Kingstown, Rhode Island to the Canadian border in Derby, Vermont. Shaw's strongest presences are in Greater Boston (where its largest competitor is Stop & Shop) and throughout New Hampshire and Vermont (where its largest competitor is Hannaford).

Despite the closings, SuperValu has remodeled and updated many Shaw's stores. In late 2010, SuperValu introduced a newly redesigned website for Shaw's; the website design is shared with sister store Jewel-Osco. Shaw's has also increased their marketing efforts, partnering with the New England Patriots and the Boston Red Sox Radio Network as their "official supermarket", airing advertisements frequently on New England radio stations, and maintaining a Facebook page with more than 93,000 fans.

In December 2013, plans were announced for a new Star Market store in the city of Boston at the site of the Boston Garden redevelopment. The store will be the first new Shaw's or Star Market store to be opened in four years.[14]

In addition, several Shaw's stores in the immediate Boston area are set to be remodeled and re-opened as Star Markets, increasing the number of locations of that brand to a possible 30 over the next few years. As of March 2014, four stores had made the switch,[15] which brought the total number of Star Market stores to 18. By September 2014, there were 20 Star Market stores.[16]

Before it was acquired by Shaw's, Star Market Company had been part of Jewel Companies, and while Jewel owned Star it built many combination food-drug stores branded as "Star-Osco", with common checkstands but separate management teams. While it owned Star, Jewel also built many stand-alone Osco Drug stores in New England. After Jewel was acquired by American Stores in 1984, the Star-Osco stores were re-launched as Star Markets, and placed under a single management team. In 1999, Albertsons acquired American Stores, and in 2001, Albertsons sold its 80 New England Osco Drug locations to Jean Coutu group, which added them to its Brooks Pharmacy group. When American Stores sold Star Markets in 1994 to Investcorp, the Osco connection was ended, or so it seemed. When Albertsons bought Sainsbury's American supermarket assets in 2004, including Star Markets, Star and Osco were reunited under one corporate umbrella. By 2005, the signs on the front of all of Albertsons-owned grocery stores with in-store pharmacies were changed, adding either "Osco" or "Sav-On" to the stores' logos, to emphasize the one-stop shopping available inside. The drug store name chosen reflected which of Albertsons' drug chains operated in the specific marketing area. Because New England had previously been an Osco market area, the Shaw's and Star Markets with pharmacies were renamed "Shaw's-Osco" and "Star-Osco". Today,[when?] nearly 60 Shaw's and Star Market stores operate an Osco Pharmacy within.

SuperValu announced in May 2011, that its national brand equivalent products (including Shaw's) would be renamed "Essential Everyday" in line with its plans to phase out own-brand products carrying the names of its banners nationwide.[17] Some of these private label products are now produced by Richelieu Foods.[18]