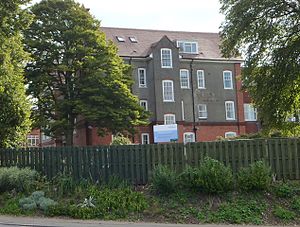 One of the boarding houses in Sherborne School for Girls

Sherborne Girls, formerly known as Sherborne School for Girls, is an independent day and boarding school for girls. Located in Sherborne, North Dorset, England. The school was founded in 1899 by Mr. and Mrs. Kenelm Wingfield Digby. There are currently 440 pupils attending Sherborne Girls, with over 90 percent of students living on campus and residing in the seven boarding houses.

All girls are required to take English, Maths, a Science subject, Religion and a Foreign Language. Most girls take nine to ten GCSEs and three to four A Level subjects. Sherborne Girls also offers the International Baccalaureate programme. Some subjects at AS/A Level are taught jointly with Sherborne School as part of the co-operation between the two schools.

Both schools also collaborate in various school activities and functions such as theatre productions, joint societies and social activities.[1]

There are seven boarding houses on campus: