The Silent Sentinels were a group of women in favor of women's suffrage organized by Alice Paul and the National Woman's Party. They protested in front of the White House during Woodrow Wilson’s presidency starting on January 10, 1917.[1] The women protested for six days a week until June 4, 1919 when the Nineteenth Amendment to the United States Constitution was passed both by the House of Representatives and the Senate.

The name Silent Sentinels was given to the women because of their silent protesting. Using silence as a form of protest was a new principled, strategic, and rhetorical strategy within the national suffrage movement and within their own assortment of protest strategies.[2]

Throughout this two and a half year long vigil many of the women were harassed, arrested, and unjustly treated by local and US authorities, including the torture and abuse inflicted on them before and during the November 14, 1917 Night of Terror.

The Suffragist was the National Woman's Party (NWP) weekly newsletter. The Suffragist acted as a voice for the Silent Sentinels throughout their vigil. It covered the Sentinels’ progress and included interviews with protesters, reports on President Woodrow Wilson’s (non) reaction, and political essays.[1] “Although The Suffragist was intended for mass circulation, its subscription peaked at just over 20,000 issues in 1917. Further, most copies went to party members, advertisers, branch headquarters, and NWP organizers, which strongly suggests that the suffragists themselves were a key audience of the publication.”[2]

File:Suffragette banner carried in picket of the White House.jpg
A Sentinel with a banner

The following are examples of banners held by the women:

The Sentinels’ all wore purple, white, and gold sashes which are the NWP's colors. Their banners were also usually colored this way.[2]

At first President Wilson was not very responsive to the women’s protest. At points he even seemed amused with it by tipping his hat and smiling. It was said that at one point Wilson even invited them in for coffee.[4] As the Sentinels continued to protest, the issue became bigger and Wilson’s opinion began to change.

Beginning in June of 1917 the protesters started getting arrested for “obstructing traffic.” 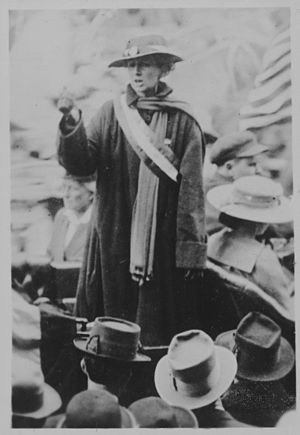 Florence Bayard Hilles, chairman of the Delaware Branch of the NWP and member of the national executive committee, was arrested picketing the White House July 13, 1917, sentenced to 60 days in Occoquan Workhouse. She was pardoned by President Wilson after serving 3 days of her term.

On June 22, 1917, police arrested protesters Lucy Burns and Katherine Morey on charges of obstructing traffic because they carried a banner quoting from Wilson's speech to Congress: "We shall fight for the things which we have always carried nearest our hearts--for democracy, for the right of those who submit to authority to have a voice in their own governments." These charges were dropped. On June 25, 12 women were arrested, including Mabel Vernon and Annie Arniel from Delaware, again on charges of obstructing traffic. They were sentenced to three days in jail or to pay a $10 fine. They chose jail. On July 14, 16 women, including Florence Bayard Hilles, Alison Turnbull Hopkins, and Elizabeth Selden Rogers (of the politically powerful Baldwin, Hoar & Sherman family) were arrested and sentenced to 60 days in jail or to pay a $25 fine.[5] Again, the women chose jail.

When the women arrived at the Occoquan Workhouse (now the Lorton Correctional Complex) they were asked to give up everything except for their clothing. They were then taken to a showering station where they were ordered to strip naked and bathe. There was only one bar of soap available for everyone in the workhouse to use, so all of the suffragists refused to use it. Afterwards they were given baggy, unclean, and uncomfortable prison clothes and taken to dinner. They could barely eat dinner because it was so sour and distasteful.[5]

The conditions of the Occoquan Workhouse were very unsanitary and unsafe. Prisoners had to share cells and many other things with those who had syphilis, and worms were frequently found in their food.[5]

The wards at Occoquan even moved some of the black sex workers to the suffragists' wing in order to make them feel humiliated. This tactic was effective because these white women were only interested in their own freedom; they generally upheld the racist notions of their day.[5]

After serving three days in the Occoquan Workhouse in Virginia, Wilson pardoned the women. At first they refused to be pardoned because they were innocent and had nothing to be pardoned for, but they were eventually forced out.[5] After a heated debate, the House of Representatives created a committee to deal with women's suffrage in September 1917. Massachusetts Representative Joseph Walsh opposed the creation of the committee, thinking the House was yielding to "the nagging of iron-jawed angels." He referred to the Silent Sentinels as "bewildered, deluded creatures with short skirts and short hair."[6]

As the suffragists kept protesting, the jail terms grew longer. Finally, police arrested Alice Paul on October 20, 1917, while she carried a banner that quoted Wilson: "The time has come to conquer or submit, for us there can be but one choice. We have made it." She was sentenced to seven months in prison. Paul and many others were again sent to the Occoquan Workhouse, where Paul was placed in solitary confinement for two weeks, with nothing to eat except bread and water. She became weak and unable to walk, so she was taken to the prison hospital. There, she began a hunger strike, and others joined her.[5]

In response to the hunger strike the prison doctors force fed the women by putting tubes down their throats.[5] They force fed them substances that would have as much protein as possible, like raw eggs mixed with milk. Many of the women ended up vomiting because their stomachs could not handle the protein. One physician reported that Alice Paul had "a spirit like Joan of Arc, and it is useless to try to change it. She will die but she will never give up."[7]

On the night of November 14, 1917, known as the "Night of Terror", the superintendent of the Occoquan Workhouse, W.H. Whittaker, ordered the nearly forty guards to brutalize the suffragists. They beat Lucy Burns, chained her hands to the cell bars above her head, then left her there for the night.[8] They threw Dora Lewis into a dark cell and smashed her head against an iron bed, which knocked her out. Her cellmate, Alice Cosu, who believed Lewis to be dead, suffered a heart attack. Guards grabbed, dragged, beat, choked, pinched, and kicked other women.[9]

Newspapers carried stories about how the protesters were being treated.[10] The stories angered some Americans and subsequently created more support for the suffrage amendment. On November 27 and 28, all the protesters were released, including Alice Paul after spending five weeks in prison. Later, in March 1918, the D.C. Circuit Court of Appeals declared all the suffrage arrests, trials, and punishments to have been unconstitutional.

On January 9, 1918, Wilson announced his support of the women's suffrage amendment. The next day, the House of Representatives narrowly passed the amendment but the Senate refused to even debate it until October. When the Senate voted on the amendment in October, it failed by two votes. And in spite of the ruling by the D.C. Circuit Court of Appeals, arrests of White House protesters resumed on August 6, 1918.

On another front, the National Woman's Party, led by Paul, urged citizens to vote against anti-suffrage senators up for election in the fall of 1918. After the 1918 election, most members of Congress were pro-suffrage. On May 21, 1919, the House of Representatives passed the amendment, and two weeks later on June 4, the Senate finally followed. With their work done in Congress, the protesters turned their attention to getting the states to ratify the amendment.

It was ratified on August 18, 1920, upon its ratification by Tennessee, the thirty-sixth state to do so by the single vote of a legislator (Harry T. Burn) who had opposed the amendment but changed his position after his mother sent him a telegram saying "Dear Son, Hurrah! and vote for suffrage. Don't forget to be a good boy and help Mrs. Catt put the 'rat' in ratification."[12][13]

The Silent Sentinels vigil was a key part of the 2004 film Iron Jawed Angels which portrayed the history of the National Woman's Party, Alice Paul, Lucy Burns, and other members of the Women's Voting Rights Movement.