The Berlin International Film Festival (German: Internationale Filmfestspiele Berlin), also called the Berlinale, is one of the world's leading film festivals and most reputable media events.[1] It is held annually in Berlin, Germany.[2]

Founded in West Berlin in 1951,[3] the festival has been celebrated annually in February since 1978. With around 300,000 tickets sold and 500,000 admissions it is considered the largest publicly attended film festival worldwide based on actual attendance rates.[4] Up to 400 films are shown in several sections, representing a comprehensive array of the cinematic world. Around twenty films compete for the awards called the Golden and Silver Bears. Since 2001 the director of the festival has been Dieter Kosslick.[5][6]

The European Film Market (EFM), a film trade fair held simultaneously to the Berlinale, is a major industry meeting for the international film circuit.[7] The trade fair serves distributors, film buyers, producers, financiers and co-production agents. The Berlinale Talent Campus, a week-long series of lectures and workshops, gathers young filmmakers from around the globe. It partners with the festival itself and is considered to be a forum for upcoming artists.[8]

The festival, the EFM and other satellite events are attended by around 20,000 professionals from over 130 countries.[9] More than 4200 journalists are responsible for the media exposure in over 110 countries.[10] At high-profile feature film premieres, movie stars and celebrities are present at the red carpet.[11] The Berlinale has established a cosmopolitan character integrating art, glamour, commerce and a global media attention.[12]

The most recent festival, the 66th Berlinale, was held from 11 February to 21 February 2016. Meryl Streep presided over the international jury.[13] Joel and Ethan Coen's film Hail, Caesar! was selected to open the festival.[14] The Golden Bear was awarded to the Italian documentary Fire at Sea, directed by Gianfranco Rosi.[15][16][17]

The 67th Berlin International Film Festival is scheduled to be held from February 9th to February 19th, 2017.[18]

The Berlin International Film Festival was founded in West Berlin in 1951.[19] Alfred Hitchcock’s Rebecca opened the first Berlinale. Although the film had premiered in 1940, many Germans had been unable to watch it until after the war ended. Since 1978 the festival has been celebrated annually in February.

File:Berlin night.jpg
Venues of the festival are spread throughout the central city districts 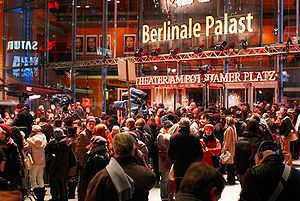 The Berlinale Palast is the venue for the competition premieres

The festival is composed of seven different film sections.[20] Films are chosen in each category by a section director with the advice of a committee of film experts. Categories include:

Competition – comprises feature-length films yet to be released outside their country of origin. Films in the Competition section compete for several prizes, including the top Golden Bear for the best film and a series of Silver Bears for acting, writing and production.[21]

Panorama – comprises new independent and arthouse films that deal with "controversial subjects or unconventional aesthetic styles". Films in the category are intended to provoke discussion, and have historically involved themes such as LGBT issues.[22]

Forum – comprises experimental and documentary films from around the world with a particular emphasis on screening works by younger filmmakers. There are no format or genre restrictions, and films in the Forum do not compete for awards.[23]

Generation – comprises a mixture of short and feature-length films aimed at children and youths. Films in the Generation section compete in two sub-categories: Generation Kplus (aimed at those aged four and above) and Generation 14plus (aimed at those aged fourteen and above). Awards in the section are determined by three separate juries – the Children's Jury, the Youth Jury and an international jury of experts – whose decisions are made independent of one another.[24]

Perspektive Deutsches Kino – comprises a wide variety of German films, with an emphasis on highlighting current trends in German cinema. There are few entry requirements, enabling emerging filmmakers to display their work to domestic and international audiences.[25]

Berlinale Shorts – comprises domestic and international short films, especially those that demonstrate innovative approaches to filmmaking. Films in the category compete for the Golden Bear for the best short film, as well as a jury-nominated Silver Bear.[26]

Retrospective – comprises classic films previously shown at the Berlinale, with films collated from the Competition, Forum, Panorama and Generation categories. Each year, the Retrospective section is dedicated to important themes or filmmakers. The special Homage series similarly examines past cinema, with a focus on honouring the life work of directors and actors.[27]

In addition to the seven sections, the Berlinale also contains several linked "curated special series", including the Berlinale Special, Gala Special, Forum Expanded, Culinary Cinema and the Homage.[20] Since 2002 a 50-second trailer opens the performances in all sections of the festival with the exception of the Retrospective. 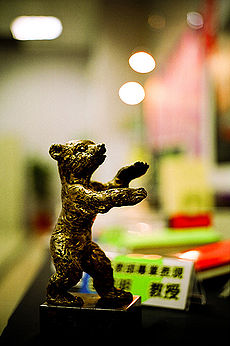 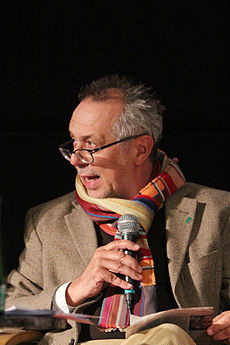 The Golden Bear (German: Goldener Bär) is the highest prize awarded for the best film at the Berlin International Film Festival.

The Silver Bear was introduced in 1956 as an award for individual achievements in direction and acting, and for best short film.

In 1965 a special film award for the runner-up to the Golden Bear was introduced. Although its official name was the Special Jury Price from 1965 to 1999, and has been the Jury Grand Prix since 2000, it is commonly known as the Silver Bear (just like the awards for individual achievements) as it is regarded as a second place award after the Golden Bear.

Other awards at the Berlin International Film Festival 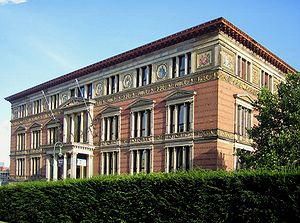 The European Film Market takes place at the Martin-Gropius-Bau.

The European Film Market (EFM) is one of three largest movie markets in the world.[29] It is the business centre during the time of the Berlinale Film Festival. The EFM is the major venue for film producers, buyers, financiers, sales agents, and distributors. It is a professional trade event, so is open to registered industry insiders. In 2011, 400 companies registered and 6,982 market badges were issued; 1,532 buyers have registered.[30]

The trade fair provides exhibition space for companies presenting their current line-up. It organizes over 1000 screenings of new films, which take place at movie theatres around Potsdamer Platz. In 2007, the CinemaxX and CineStar were used to showcase new productions. In 2010, the Astor Film Lounge showed market screenings in three dimensions using digital RealD technology.

The Berlinale Co-Production Market is a three-day networking platform for producers and financiers, as well as broadcasting and funding representatives who are participating in international co-productions. At the Berlinale Co-Production Market, producers can introduce selected projects and find co-production partners and/or financiers in one-on-one meetings. 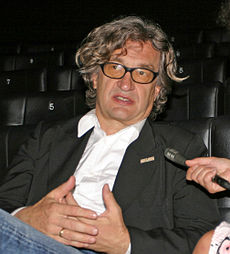 Wim Wenders attended the Talent Campus as a lecturer

The event runs six days during the Berlinale and features lectures and panel discussions with well-known professionals addressing issues in filmmaking today. Workshops, excursions, personal tutoring, coaching, and training of participants from different fields of work are part of the programme.