From Infogalactic: the planetary knowledge core
Jump to: navigation, search
This article is about the ecological zone type. For other uses, see Steppe (disambiguation). 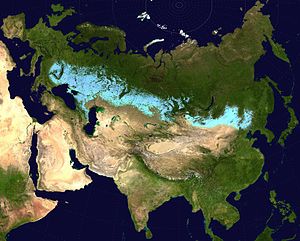 The Eurasian Steppe Belt (in red on the map), a path of passage for cultures - a possible origin for the Indo-European languages, the domesticated horse, and the wheel and chariot. 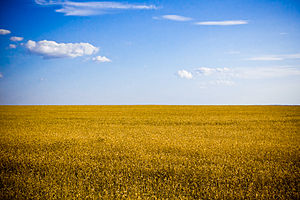 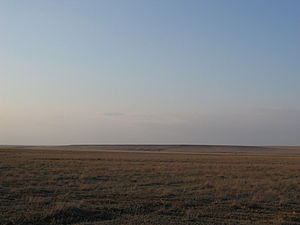 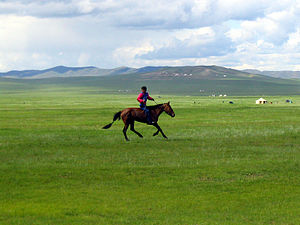 listen)) is an ecoregion, in the montane grasslands and shrublands and temperate grasslands, savannas, and shrublands biomes, characterized by grassland plains without trees apart from those near rivers and lakes. The prairie (especially the shortgrass and mixed prairie) is an example of a steppe, though it is not usually called such. It may be semi-desert, or covered with grass or shrubs or both, depending on the season and latitude. The term is also used to denote the climate encountered in regions too dry to support a forest, but not dry enough to be a desert. The soil is typically of chernozem type.

Steppes are usually characterized by a semi-arid and continental climate. Extremes can be recorded in the summer of up to 40 °C (104 °F) and in winter, −40 °C (−40 °F). Besides this huge difference between summer and winter, the differences between day and night are also very great. In the highlands of Mongolia, 30 °C (86 °F) can be reached during the day with sub-zero °C (sub 32 °F) readings at night.

The mid-latitude steppes can be summarised by hot summers and cold winters, averaging 250–510 mm (10–20 in) of precipitation per year. Precipitation level alone is not what defines a steppe climate; potential evapotranspiration must also be taken into account. 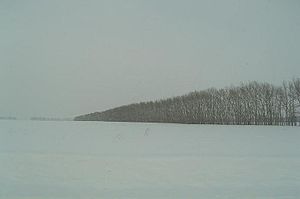 Two types of steppe can be recorded:[1]

Peculiar types of steppe include shrub-steppe and alpine-steppe.

The Eurasian Grass-Steppe of the temperate grasslands, savannas, and shrublands had a role in the spread of the horse, the wheel, and the Indo-European languages. The Indo-European expansion and diverse invasions of horse archer civilizations of the steppe eventually led to, e.g., the rise of Mycenaean Greece by amalgamation of Indo-Europeans with the autochthonous pre-Greek population and also its destruction during the Dorian invasion in the Late Bronze Age collapse, followed by the demise of the Achaeans, the spread of the Sea Peoples, and eventually the rise of Archaic and ultimately Classical Greece. 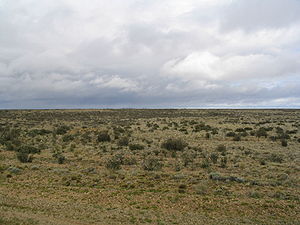 The world's largest steppe region, often referred to as "the Great Steppe", is found in Eastern Europe and Central Asia, and neighbouring countries stretching from Ukraine in the west through Russia, Kazakhstan, Turkmenistan and Uzbekistan to the Altai, Koppet Dag and Tian Shan ranges.

The inner parts of Anatolia in Turkey, Central Anatolia and East Anatolia in particular and also some parts of Southeast Anatolia, as well as much of Armenia and Iran are largely dominated by cold steppe.

The Pannonian Plain is another steppe region in eastern Europe, primarily Hungary. 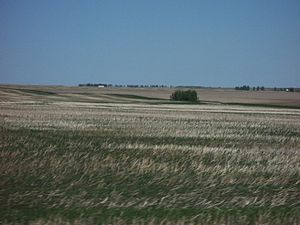 Another large steppe area (prairie) is located in the central United States, western Canada and northern part of Mexico. The shortgrass prairie steppe is the westernmost part of the Great Plains region. The Channeled Scablands in Southern British Columbia and Washington State is an example of a steppe region in North America outside of the Great Plains.

In South America, cold steppe can be found in Patagonia and much of the high elevation regions east of the southern Andes.

Relatively small steppe areas can be found in the interior of the South Island of New Zealand. 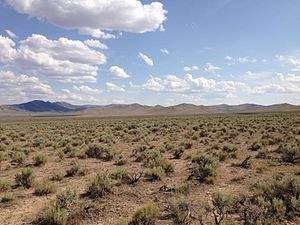 Sagebrush steppe in northeastern Nevada along US 93

In Europe, some Mediterranean areas have a steppe-like vegetation, such as central Sicily, southern Portugal, parts of Greece in the southern Athens area,[2] and central-eastern Spain, especially the southeastern coast (around Murcia), and places cut off from adequate moisture due to rain shadow effects such as Zaragoza.

In Asia, a subtropical steppe can be found in semi-arid lands that fringe the Thar Desert of the Indian subcontinent.

In Australia, "subtropical steppe" can be found in a belt surrounding the most severe deserts of the continent and around the Musgrave Ranges.

In North America this environment is typical of transition areas between zones with a Mediterranean climate and true deserts, such as Reno, Nevada, the inner part of California, and much of West Texas and adjacent areas in Mexico.