Tel Hanaton (Arabic: Tal Badawiye; meaning 'The Nomads' Tel') is a Bronze Age tel situated at the Western edge of the Beit Netofa Valley, in the western Lower Galilee region of Israel, 2 km South of the Town of Kfar Manda and 1 km ENE of the modern settlement which took its name, Kibbutz Hanaton.

For much of the Middle Bronze Age this area of Ancient Israel was under the control of the Pharaohs of Egypt, either as provinces and city-states ruled by Egyptian Governors; or by vassal Canaanite kings who paid annual homage (tribute) to the ruling Pharaoh. It is possible that the city was named for Pharaoh Amenhotep IV also known by the name Akhenaten, the founder of a brief period of monotheism (Atenism) from the 18th dynasty of rulers of Egypt during 1352-1334 BC. The name Hanaton (pronounced Khanaton) and the name Akhenaten have identical consonants, which in the Semitic languages of the period are more significant than vowels, which may vary.[citation needed]

Tel Hanaton is associated with the biblical Hanaton, mentioned in The Book of Joshua in the lands apportioned to the Tribe of Zevulun: "Then the border went around it on the north side of Hannathon, and it ended in the Valley of Jiphthah El." (Joshua 19:14)

The tel rises to 75m above the surrounding valley, part of which represents the stratification layers on which the Bronze Age and later settlements were built on a natural outcrop of rock.

Archaeologists believe the settlement dates to the Middle Bronze Age. The site has easy access to water sources; nearby forested areas for wood; limestone hills to quarry for building materials and tools; fertile surrounding arable land for crops and livestock; the presence of clay for pottery in the muddy earth surrounding the tel caused by seasonal flooding; the natural rock outcrop raised above its surroundings for easy fortification. It was also located on the international trade route of the period - a branch of the Via Maris. 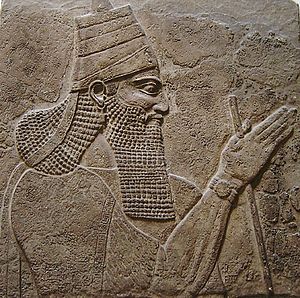 Tiglath-Pileser III—stela from the walls of his palace (British Museum, London)

The Tel is mentioned in the 14th Century BC Amarna Letters of Ancient Egypt, showing the city's importance on a major trade route. Hanaton is mentioned some 700 years later in records at Niniveh, the capital of Ancient Assyria as one of the 5 [Israelite] cities totally destroyed by Tiglath-pileser III, King of Assyria, in the campaign of conquest of the (Northern) Biblical Kingdom of Israel between 724-722 BC.

The area of the Bronze Age city reached 100 dunams (approx. 25 acres) which attests to the power and wealth of the settlement, most likely achieved due to the large tracts of highly fertile arable land surrounding the tel in the Beit Netofa Valley, together with its position astride a major 'Egypt to Mesopotamia' international trade route for the period.

Most Bronze Age tels were forced by increasing populations to expand beyond their hilltops during the Iron (Israelite) age, protected by retaining walls built further out encompassing a greater area. In these cases the former Tel forms the acropolis of the expanded city. Hanaton could not expand in this manner as its immediately surrounding land was subject to months-long flooding following winter rains and drainage technology of the period did not allow for drying up such land.

Restricted in this manner from expansion, the city, whilst never abandoned through to the Roman Period, and unable to expand to the size of Hellenistic period cities, continually declined and was replaced as a major trading and urban centre by nearby Tzippori (Sepphoris) which was established on the ridge a few kilometres to the south east.

During the Early Arab Period, the site became a small agricultural village named Hotsfit, a name which survived into the Crusader Period.

The site shows physical evidence of typical Frankish construction with stone stairwells, large halls and arched ceilings, which may have been part of an 11th-century fortified agricultural settlement together with nearby Tzippori (Sephoris/Dioceserea). The architecture, whilst having much in common with concurrent strongholds of the Ayyubid period, has distinct Crusader features, such as the arch-free flat-roofed stairwells.

In the 1330s the region was conquered by the Mamelukes of Egypt, who used the Crusader fort to house their garrison.

The Arabic name for the tel, Tal Badawiye relates to the Ottoman Period when a Caravanserai named Khan El Badawiye was established atop the tel.