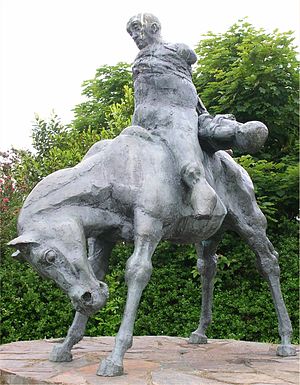 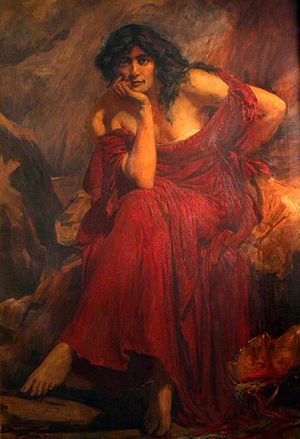 Ceridwen by Christopher Williams, (1910)
File:Jesus-College-MS-111 00349 175r (cropped).jpg
The opening few lines of the Mabinogi, from the Red Book of Hergest, scanned by the Bodleian Library

listen)) are the earliest British prose stories, and belong to the Matter of Britain. The stories were compiled in Middle Welsh in the 12th–13th centuries from earlier oral traditions. There are two main source manuscripts, created c. 1350–1410, as well as a few earlier fragments. The title covers a collection of eleven prose stories of widely different types, offering drama, philosophy, romance, tragedy, fantasy and humour, and created by various narrators over time. There is a classic hero quest, "Culhwch and Olwen"; a historic legend in "Lludd and Llefelys," complete with glimpses of a far off age; and other tales portray a very different King Arthur from the later popular versions. The highly sophisticated complexity of the Four Branches of the Mabinogi defies categorisation. The stories are so diverse that it has been argued that they are not even a true collection.[1]

Scholars from the 18th century to the 1970s predominantly viewed the tales as fragmentary pre-Christian Celtic mythology,[2] or in terms of international folklore.[3] There are certainly components of pre-Christian Celtic mythology and folklore, but since the 1970s[4] an understanding of the integrity of the tales has developed, with investigation of their plot structures, characterisation, and language styles. They are now seen as a sophisticated narrative tradition, both oral and written, with ancestral construction from oral storytelling,[5][6] and overlay from Anglo-French influences.[7]

The first modern publications were English translations by William Owen Pughe of several tales in journals in 1795, 1821, and 1829.[8] However it was Lady Charlotte Guest in 1838–45 who first published the full collection,[9] bilingually in Welsh and English. She is often assumed to be responsible for the name "Mabinogion", but this was already in standard use in the 18th century.[10] Indeed, as early as 1632 the lexicographer John Davies quotes a sentence from Math fab Mathonwy with the notation "Mabin" in his Antiquae linguae Britannicae ... dictionarium duplex, article "Hob". The later Guest translation of 1877 in one volume has been widely influential and remains actively read today.[11] The most recent translation is a compact version by Sioned Davies.[12] John Bollard has published a series of volumes with his own translation, with copious photography of the sites in the stories.[13] The tales continue to inspire new fiction,[14] dramatic retellings,[15] visual artwork, and research.[16]

The name first appears in 1795 in William Owen Pughe's translation of Pwyll in the journal Cambrian Register under the title "The Mabinogion, or Juvenile Amusements, being Ancient Welsh Romances".[17] The name appears to have been current among Welsh scholars of the London-Welsh Societies and the regional eisteddfodau in Wales. It was inherited as the title by the first publisher of the complete collection, Lady Charlotte Guest. The form mabynnogyon occurs once at the end of the first of the Four Branches of the Mabinogi in one manuscript. It is now generally agreed that this one instance was a mediaeval scribal error which assumed 'mabinogion' was the plural of 'mabinogi', which is already a Welsh plural occurring correctly at the end of the remaining three branches.[18]

The word mabinogi itself is something of a puzzle, although clearly derived from the Welsh mab, which means "son, boy, young person".[19] Eric P. Hamp of the earlier school traditions in mythology, found a suggestive connection with Maponos "the Divine Son", a Gaulish deity. Mabinogi properly applies only to the Four Branches,[20] which is a tightly organised quartet very likely by one author, where the other seven are so very diverse (see below). Each of these four tales ends with the colophon "thus ends this branch of the Mabinogi" (in various spellings), hence the name.[21]

File:The Mabinogion - From the Llyfr Coch o Hergest, and other ancient Welsh manuscripts, with an English translation and notes (IA bub gb LsJgqSFFqkkC).pdf
PDF file of Lady Guest's translation of the Mabinogion (1st version; 1838 and 1845)

Lady Charlotte Guest's work was helped by the earlier research and translation work of William Owen Pughe.[22] The first part of Charlotte Guest's translation of the Mabinogion appeared in 1838, and it was completed in seven parts in 1845.[23] A three-volume edition followed in 1846,[24] and a revised edition in 1877. Her version of the Mabinogion remained standard until the 1948 translation by Gwyn Jones and Thomas Jones, which has been widely praised for its combination of literal accuracy and elegant literary style.[25][26] Several more, listed below, have since appeared.

Dates for the tales in the Mabinogion have been much debated, a range from 1050 to 1225 being proposed,[27] with the consensus being that they are to be dated to the late 11th and 12th centuries.[28] The stories of the Mabinogion appear in either or both of two medieval Welsh manuscripts, the White Book of Rhydderch or Llyfr Gwyn Rhydderch, written circa 1350, and the Red Book of Hergest or Llyfr Coch Hergest, written about 1382–1410, though texts or fragments of some of the tales have been preserved in earlier 13th century and later manuscripts. Scholars agree that the tales are older than the existing manuscripts, but disagree over just how much older. It is clear that the different texts included in the Mabinogion originated at different times (though regardless their importance as records of early myth, legend, folklore, culture, and language of Wales remains immense).

Thus the tale of Culhwch ac Olwen, with its primitive warlord Arthur and his court based at Celliwig, is generally accepted to precede the Arthurian romances, which themselves show the influence of Geoffrey of Monmouth's Historia Regum Britanniae (1134–36) and the romances of Chrétien de Troyes.[29] Those following R. S. Loomis would date it before 1100, and see it as providing important evidence for the development of Arthurian legend, with links to Nennius and early Welsh poetry.[30] By contrast, The Dream of Rhonabwy is set in the reign of the historical Madog ap Maredudd (1130–60), and must therefore either be contemporary with or postdate his reign, being perhaps early 13th C.[31]

Much debate has been focused on the dating of the Four Branches of the Mabinogi. Ifor Williams offered a date prior to 1100, based on linguistic and historical arguments,[32] while later Saunders Lewis set forth a number of arguments for a date between 1170 and 1190; Thomas Charles-Edwards, in a paper published in 1970, discussed the strengths and weaknesses of both viewpoints, and while critical of the arguments of both scholars, noted that the language of the stories best fits the 11th century, (specifically 1050–1120),[33] although much more work is needed. More recently, Patrick Sims-Williams argued for a plausible range of about 1060 to 1200, which seems to be the current scholarly consensus (fitting all the previously suggested date ranges).

The collection represents the vast majority of prose found in medieval Welsh manuscripts which is not translated from other languages. Notable exceptions are the Areithiau Pros. None of the titles are contemporary with the earliest extant versions of the stories, but are on the whole modern ascriptions. The eleven tales are not adjacent in either of the main early manuscript sources, the White Book of Rhydderch (c. 1375) and the Red Book of Hergest (c. 1400), and indeed Breuddwyd Rhonabwy is absent from the White Book.

Four Branches of the Mabinogi

The Four Branches of the Mabinogi (Pedair Cainc y Mabinogi) are the most clearly mythological stories contained in the Mabinogion collection. Pryderi appears in all four, though not always as the central character.

The tales Culhwch and Olwen and The Dream of Rhonabwy have interested scholars because they preserve older traditions of King Arthur. The subject matter and the characters described events that happened long before medieval times. After the departure of the Roman Legions, the later half of the 5th century was a difficult time in Britain. King Arthur's twelve battles and defeat of invaders and raiders are said to have culminated in the Battle of Badon.

There is no consensus about the ultimate meaning of The Dream of Rhonabwy. On one hand it derides Madoc's time, which is critically compared to the illustrious Arthurian age. However, Arthur's time is portrayed as illogical and silly, leading to suggestions that this is a satire on both contemporary times and the myth of a heroic age.[34]

Rhonabwy is the most literary of the medieval Welsh prose tales. It may have also been the last written. A colophon at the end declares that no one is able to recite the work in full without a book, the level of detail being too much for the memory to handle. The comment suggests it was not popular with storytellers, though this was more likely due to its position as a literary tale rather than a traditional one.[35]

The tale The Dream of Macsen Wledig is a romanticised story about the Roman emperor Magnus Maximus, called Macsen Wledig in Welsh. Born in Hispania, he became a legionary commander in Britain, assembled a Celtic army and assumed the title of Roman Emperor in 383. He was defeated in battle in 385 and beheaded at the direction of the Eastern Roman emperor.

The story of Taliesin is a later survival, not present in the Red or White Books, and is omitted from many of the more recent translations.

The tales called the Three Welsh Romances (Y Tair Rhamant) are Welsh-language versions of Arthurian tales that also appear in the work of Chrétien de Troyes.[36] Critics have debated whether the Welsh Romances are based on Chrétien's poems or if they derive from a shared original.[37] Though it is arguable that the surviving Romances might derive, directly or indirectly, from Chrétien, it is probable that he in turn based his tales on older, Celtic sources.[38] The Welsh stories are not direct translations and include material not found in Chrétien's work.

The Guest translation can be found with all original notes and illustrations at:

The original Welsh texts can be found at:

Versions without the notes, presumably mostly from the Project Gutenberg edition, can be found on numerous sites, including:

A theory on authorship can be found at