The Tank Museum (previously The Bovington Tank Museum) is a collection of armoured fighting vehicles at Bovington Camp in Dorset, South West England. It is about 1 mile (1.6 km) north of the village of Wool and 12 miles (19 km) west of the major port of Poole. The collection traces the history of the tank. With almost 300 vehicles on exhibition from 26 countries it is the largest collection of tanks and the third largest collection of armoured vehicles in the world.[Note 1] It includes Tiger 131, the only working example of a German Tiger I tank and a British First World War Mark I, the world's oldest surviving combat tank.

It is the museum of the Royal Tank Regiment, Royal Armoured Corps and a registered charity.[1] Bovington Camp, in which the museum is located, trains most sections of the British Army in tracked-vehicle driving as well as repairing and maintaining the vehicles in its workshops.

The redeveloped museum, with control tower for the adjoining events area.

In 1916 the British War Office established the Bovington camp as a tank crew training facility. At that time the Army was introducing tanks into the First World War in an attempt to break the stagnation of trench warfare. In 1919 the tanks returned to Bovington from France. Many of them were fit only for scrap. However, a small number of the least damaged vehicles were put to one side so that tank crews and designers could have an idea of the tank's early heritage.

In 1923 the writer Rudyard Kipling visited Bovington and recommended a museum should be set up. The collection grew greatly after the Second World War, as many Allied and captured Axis tanks were added. In 1947 it was opened to the general public. The Tank Museum has continued to expand and today it is primarily seen as a means of educating and entertaining the general public, with the exhibition being geared in this direction. Many of the tanks are in complete working order and can be seen in action throughout summer months in special displays.

The museum holds an annual TankFest display of their operating vehicles and visiting vehicles.

In 2012, the museum's historian David Fletcher, who had been an employee since 1982, was made an MBE "for his services to the history of armoured warfare".[2] 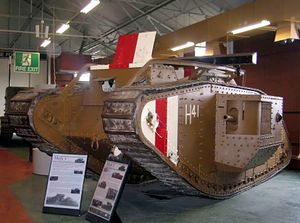 British Mark V. It saw action at the Battle of Amiens in August 1918. 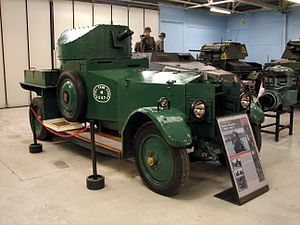 Contains the whole British tank development from Little Willie to the Mark VIII "Liberty", plus an example of the British Mark V, one of the few World War I tanks still in working order. Also featured is an illustration of the life of the soldier and writer T. E. Lawrence, who lived at nearby Clouds Hill cottage and served in the Tanks Corps at Bovington for a short time.

Highlights the rapid progress made in tank design and vehicle armour during the period leading up to World War II. 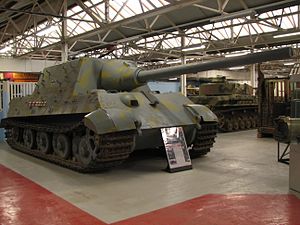 Is the biggest section, with tanks from most nations involved in the conflict. It includes Tiger 131, a German Tiger I tank bearing turret number 131. It was captured in Tunisia in April 1943 and has been fully restored to running condition by the workshops at Bovington. It is the only Tiger I left that is capable of running under its own power. It also has the last surviving DD Tank with its canvas screen, and the only one still in working order. This vehicle was used in the 2014 film Fury.[4] 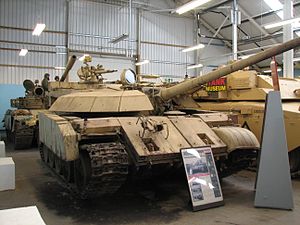 Sponsored by the scale-model manufacturer. This hall contains the Battlegroup Afghanistan exhibition. The men of the Royal Armoured Corps who have been involved in some of the fiercest fighting since World War Two. Hear first-hand accounts from soldiers who have fought there as well as exploring a recreated Forward Operating Base & a range of vehicles used in Afghanistan. The remainder of the Hall contain a Conqueror, Chieftain which is accessible as advertised, Challenger 1 & the TOG2. The newly installed children’s soft play area is also located there.

Highlights the Chobham armour used in the Gulf War against Iraq and pays tribute to the Centurion tank which, during its 46-year career (1945–1991), proved to be one of the best British tanks ever produced.

The Vehicle Conservation Centre is a new building (officially opened in September 2013) added to provide cover for more of the collection and put on view vehicles that had previously not been seen by the public. It houses about 100 vehicles in 40,000 square feet.