From Infogalactic: the planetary knowledge core
Jump to: navigation, search
This article is about the former British War Office. For use of this term in the United States, see United States Department of War. 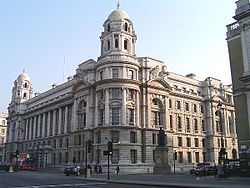 The War Office was a department of the British Government responsible for the administration of the British Army between the 17th century and 1964, when its functions were transferred to the Ministry of Defence.

The War Office developed from the Council of War, an ad hoc grouping of the King and his senior military commanders which oversaw the Kingdom of England's frequent wars and campaigns. A number of older institutions, notably the Board of Ordnance (which dates from the 15th century), were merged to form the War Office. It worked alongside the Admiralty, responsible for the Royal Navy, and the (much later) Air Ministry, which oversaw the Royal Air Force. Its foundation has traditionally been ascribed to William Blathwayt, who on his appointment as Secretary at War in 1684 greatly expanded the remit of his office to cover general day-to-day administration of the Army.

The department had several London homes until it settled at Horse Guards in Whitehall in 1722, where it was to remain until 1858. The War Office moved to Cumberland House, Pall Mall for the last half of the 19th century before finally moving to purpose-built accommodation in what is now known as the Old War Office Building.

The management of the War Office was initially headed by the Secretary at War, whose role had originated under King Charles II of England as the secretary to the Commander-in-Chief of the British Army. The first War Office Secretary at War is usually said to have been William Blathwayt, though he had two predecessors in the post. It was, however, a fairly minor government post which dealt with the minutiae of administration rather than grand strategy. Issues of strategic policy during wartime were managed by the Northern and Southern Departments (the predecessors of today's Foreign Office and Home Office).

The disastrous campaigns of the Crimean War led to the consolidation of all administrative duties in 1855 under the Secretary of State for War, a Cabinet post. He was not, however, solely responsible for the Army; the Commander-in-Chief held a virtually equal level of responsibility. This was reduced in theory by the reforms introduced by Edward Cardwell in 1870, which subordinated the Commander-in-Chief to the Secretary for War. In practice, however, a huge amount of influence was retained by the exceedingly conservative Commander-in-Chief Field Marshal Prince George, 2nd Duke of Cambridge, who held the post between 1856–1895. His resistance to reform caused military efficiency to lag well behind Britain's rivals, a problem which became painfully obvious during the Second Boer War.

The management of the War Office was undermined by persistent clashes between the civilian and military sides of the organisation. The government of H. H. Asquith attempted to resolve this during the First World War by appointing Lord Kitchener as Secretary for War, making him the first and only soldier to hold the post. This did not prove a happy experience; under his tenure, the Imperial General Staff was virtually dismantled. Its role was effectively replaced by the Committee of Imperial Defence, established in 1902 to discuss wider defence issues.

The War Office declined greatly in importance after the First World War, a fact illustrated by the drastic reductions in its staff numbers during the inter-war period. On 1 April 1920, it employed 7,434 civilian staff; this had shrunk to 3,872 by 1 April 1930. Its responsibilities and funding were also reduced. In 1936, the government of Stanley Baldwin appointed a Minister for Co-ordination of Defence, who worked outside of the War Office. When Winston Churchill became Prime Minister in 1940, he bypassed the War Office altogether and appointed himself Minister of Defence (though there was, curiously, no ministry of defence until 1947).

Clement Attlee continued this arrangement when he came to power in 1945 but appointed a separate Minister of Defence for the first time in 1947. In 1964, the present form of the Ministry of Defence was established, unifying the War Office, Admiralty, and Air Ministry.

The records of the War Office are kept by The National Archives under their code WO.

Between 1906 and its abolition in 1964, the War Office was based in a large neo-Baroque building, completed in 1906, located on Horse Guards Avenue at its junction with Whitehall in central London. It contains about 1,000 rooms across seven floors, linked by 2½ miles of corridors. The construction of the War Office building took five years to complete at what was then a huge cost of over £1.2 million.

The building is somewhat oddly shaped, forming a trapezium shape in order to maximise the usage of the irregularly shaped plot of land on which it was built. Its four distinctive domes were designed as a decorative means of disguising the building's shape.

The building continued to be used by the Ministry of Defence and is not open to the public. In August 2013 it was announced that the building would be put up for sale on the open market with the aim of realising offers in excess of £100 million. It is likely to become a hotel.[1]

On 13 December 2014 the Ministry of Defence confirmed that the War Office building had been sold to Indian origin Hinduja Group for an undisclosed amount.[2] The War office building will be converted to 5 star hotel and residential apartments by Hinduja group in partnership with Spanish group Obrascon Huarte Lain Desarrollos.[3]