Timothy Garton Ash CMG FRSA (born 12 July 1955) is a British historian, author and commentator. He is Professor of European Studies at Oxford University. Much of his work has been concerned with the late modern and contemporary history of Central and Eastern Europe. He has written about the Communist regimes of that region, their experience with the secret police, the Revolutions of 1989 and the transformation of the former Eastern Bloc states into member states of the European Union. He has examined the role of Europe and the challenge of combining freedom and diversity, especially in relation to free speech.

Garton Ash was educated at Sherborne School, a well-known public school in Dorset in South West England, followed by Exeter College, Oxford where he studied Modern History. For post-graduate study, he went to St Antony's College, Oxford, and then, in the still divided Berlin, the Free University in West Berlin and the Humboldt University in East Berlin. During his studies in East Berlin, he was under surveillance from the Stasi, which served as the basis for his 1997 book The File.[1] 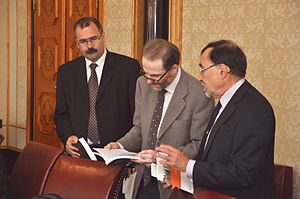 In the 1980s, Garton Ash was Foreign Editor of The Spectator and a columnist for The Independent. He became a Fellow at St Antony's College in 1989, a senior fellow at Stanford University's Hoover Institution[2] in 2000, and Professor of European Studies at the University of Oxford[3] in 2004. He has written a weekly column in The Guardian since 2004 and is a long-time contributor to the New York Review of Books.[4] His column is also translated in the Turkish daily Radikal and in the Spanish daily El País,[5] as well as other papers.

He and his wife Danuta live predominantly in Oxford, although also in Stanford.[6] They have two sons.[6]