The Turpan Depression or Turfan Depression is a fault-bounded trough located around and south of the city-oasis of Turpan, in the Xinjiang Autonomous Region in far western China, about 150 kilometres (93 mi) southeast of the regional capital Ürümqi. It includes the fourth lowest exposed point on the Earth's surface (dry Lake Ayding, −154 metres (−505 ft)), after the Dead Sea, Sea of Galilee, and Lake Assal (Djibouti). It is entirely below sea level.[1] By some measures, it is also the hottest and driest area in China.[2] 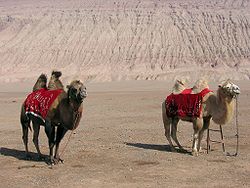 The Turpan Basin formed in a shear zone during the Late Permian due to motion between the East European and the Angaran craton. It was subsequently deformed by the collision of the Indian and Eurasian plates in the Cenozoic. In the latter deformation, a thrust fault belt running from east to west, the Flaming Mountains, was formed in the center of the basin. The Flaming Mountains are 98 km (61 mi) long and 9 km (5.6 mi) wide; the highest peak reaches an elevation of 831.7 m (2,729 ft) above sea level. The Turfan volcano is located near Turpan.

The Shihongtan uranium ore deposit is located at the southwestern margin of the Turpan Depression, some 35 km (22 mi) south-southwest from Turpan City.[3]

The Turpan Basin has a harsh, continental desert climate in which the precipitation is far less than the potential evaporation. At Turpan City, July is the hottest month with a 24-hour average temperature of 32.2 °C (90.0 °F) and January the coldest with a 24-hour average temperature of −7.6 °C (18.3 °F). Monthly rainfall is highest in June, at 2.9 millimetres (0.11 in) and lowest in February and April, at 0.5 mm (0.020 in). The annual average precipitation is only 15.7 mm (0.62 in), falling on only 13 days per year. In contrast to this, the potential annual evaporation rate reaches 3,000 mm (120 in).[citation needed] Because of its climate, the area is sometimes counted as one of the Furnaces of China, although the locations included under this heading vary. 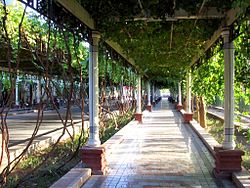 On the shores of Aydingkol Lake, reeds, tamarisks, saxauls, as well as other shrubs and weeds can be found. Away from sources of water, the Turpan Basin is not covered by vegetation. Consequently, agriculture is limited to oasis and depends on a sophisticated irrigation system known as the Karez System. The irrigation water comes from the surrounding mountain ranges, in particular from the annual melting of the snow. The Karez System consists of wells, underground channels, ground canals, and small reservoirs, which use the natural slope of the terrain to sustain the water flow and guide the water right to the plants while minimizing evaporation all along the way. The historical record of the system extends back to the Han Dynasty. The number of Karez systems in the area is slightly below 1,000 and the total length of the canals is about 5,000 km in length. The Karez System is therefore considered as one of the three great ancient projects in China along with the Great Wall and the Grand Canal. Recently, development of groundwater through tubewells has led to a general fall in water tables, and many karez systems have failed. Farming in the Turpan Basin is particularly famous for its fruit. Because of the dry and hot conditions, the fruits grown in the depression have very high concentrations of sugar. They are traditionally processed by drying in open drying barns. The cultivated fruit include: mulberry, peach, apricot, apple, pomegranate, pear, fig, walnut, as well as grapes, watermelons and muskmelons. Among the fruit, the grapes stand out: more than 100 varieties of grape are cultivated in the area and it accounts for 90% of China's seedless grape crop. Other specialty agricultural products of the region are Donghu Hami melons and long-staple cotton. 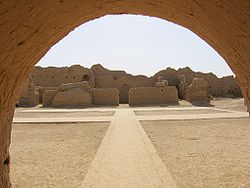 The ancient city of Gaochang was a key point on the ancient Silk Road and dates back to the 1st century BC. It was burnt down in wars in the 14th century. The Bezeklik Thousand Buddha Caves, which are located in the Flaming Mountains' Mutou Valley, about 30 km (19 mi) east of the city of Turpan, have been hewn into the rock from the Tang Dynasty era up to the time of the Yuan Dynasty (13th century). The caves are famous for their murals, which can still be found in about 40 of the 77 known caves. The desert climate has favored preservation of the content of the Astana-Karakhoja ancient tombs, which are located about 6 km from the ancient city of Gaochang. The tombs are the burial place for nobles, officials, and others who were interred there from the times of the Western Jin Dynasty until the middle of the Tang Dynasty era.