Una Merkel was born in Covington, Kentucky, and grew up in Philadelphia and New York City.[1]

Merkel, who bore a resemblance to actress Lillian Gish, began her career as a stand-in for Gish,[1] most notably in the 1928 classic The Wind, a late silent film. Merkel appeared in a few films during the silent era, including the two-reel Love's Old Sweet Song (1923) made by Lee DeForest in his Phonofilm sound-on-film process, and starring Louis Wolheim and Donald Gallaher. However, she spent most of her time in New York City working on Broadway.

Merkel returned to Hollywood and achieved her greatest success with the advent of "talkies". She played Ann Rutledge in the film Abraham Lincoln (1930) directed by D. W. Griffith. During the 1930s, Merkel became a popular second lead in a number of films, usually playing the wisecracking best friend of the heroine, supporting actresses such as Jean Harlow, Carole Lombard, Loretta Young, and Dorothy Lamour.[1] 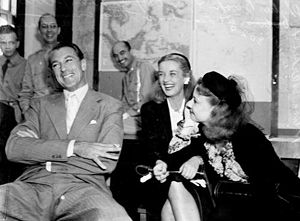 With her kewpie doll looks, combined with a strong Southern accent and wry line delivery, she enlivened scores of films of the era and worked with most of the stars of the period. She played Sam Spade's secretary in the original 1931 version of The Maltese Falcon. Merkel was a Metro-Goldwyn-Mayer contract player from 1932 to 1938, appearing in as many as twelve films in a year, often on loan-out to other studios. She was also often cast as leading lady to a number of comedians in their starring pictures, including Jack Benny, Harold Lloyd, and Charles Butterworth.

In 42nd Street (1933), Merkel played a streetwise showgirl who was Ginger Rogers' character's buddy. In the famous "Shuffle Off To Buffalo" number, Merkel and Rogers sang the verse: "Matrimony is baloney. She'll be wanting alimony in a year or so./Still they go and shuffle, shuffle off to Buffalo." Merkel appeared in both the 1934 and the 1952 film versions of The Merry Widow, playing different roles in each.

One of her most famous roles was in the Western Destry Rides Again (1939) in which her character, Lillibelle, gets into a famous "cat-fight" with Frenchie (Marlene Dietrich) over the possession of her husband's trousers, won by Frenchie in a crooked card game. She played the elder daughter to the W. C. Fields character, Egbert Sousé in the 1940 film The Bank Dick. Her film career went into decline during the 1940s, although she continued working in smaller productions. In 1950 she was leading lady to William Bendix in the baseball comedy Kill the Umpire, which was a surprise hit.

She made a comeback as a middle-aged woman playing mothers and maiden aunts, and in 1956 won a Tony Award for her role on Broadway in The Ponder Heart. She had a major part in the MGM 1959 film The Mating Game as Paul Douglas's wife and Debbie Reynolds's mother, and was nominated for an Academy Award for Best Supporting Actress in Summer and Smoke (1961). She was also featured as Brian Keith's housekeeper in the Walt Disney comedy The Parent Trap in 1961. She appeared in her final film role opposite Elvis Presley in Spinout.

On March 5, 1945, Merkel was nearly killed when her mother Bess, with whom she was sharing an apartment in New York City, committed suicide by gassing herself. Merkel was overcome by the five gas jets her mother had turned on in their kitchen and was found unconscious in her bedroom.[2][3]

On March 4, 1952, nearly seven years to the day that Merkel's mother Bess committed suicide, Merkel overdosed on sleeping pills.[2] She was found unconscious by a nurse who was caring for her at the time and remained in a coma for a day.[4]

Merkel was a lifelong practicing Methodist.[5][6]

Merkel was married once and had no children.[7] She married North American Aviation executive Ronald L. Burla in 1932.[8] They separated in April 1944. Merkel filed for divorce on December 19, 1946 in Miami.[9]

On January 2, 1986, Merkel died of undisclosed causes in Los Angeles at the age of 82.[7][10] She is buried near her parents, Arno and Bess Merkel, in Highland Cemetery in Fort Mitchell, Kentucky.[11]

For her contribution to the motion picture industry, Una Merkel has a star on the Hollywood Walk of Fame 6230 Hollywood Boulevard.[12]