Seal of the Vatican Secret Archives 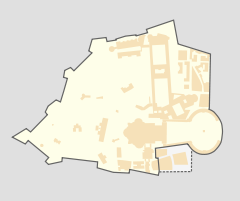 Vatican Secret Archives
Location on a map of Vatican City

The Vatican Secret Archives (Latin: Archivum Secretum Apostolicum Vaticanum; Italian: Archivio Segreto Vaticano) is the central repository in the Vatican City for all of the acts promulgated by the Holy See. The Pope, as Sovereign of Vatican City and having primal incumbency, owns the archives until his death or resignation, with ownership passing to his successor. The archives also contain the state papers, correspondence, papal account books,[1] and many other documents which the church has accumulated over the centuries. In the 17th century, under the orders of Pope Paul V, the Secret Archives were separated from the Vatican Library, where scholars had some very limited access to them, and remained absolutely closed to outsiders until 1881, when Pope Leo XIII opened them to researchers, more than a thousand of whom now examine some of its documents each year.[2]

The use of the word "secret" in the title "Vatican Secret Archives" does not denote the modern meaning of confidentiality. Its meaning is closer to that of the word "private", indicating that the archives are the Pope's personal property, not belonging to those of any particular department of the Roman Curia or the Holy See. The word "secret" was generally used in this sense as also reflected in phrases such as "secret servants", "secret cupbearer", "secret carver" or "secretary", much like an esteemed position of honour and regard comparable to a VIP.[3]

The Vatican Secret Archives have been estimated to contain 85 kilometres (53 mi) of shelving,[4] and there are 35,000 volumes in the selective catalogue alone. "Indexes must be consulted in the Index Room and replaced in their original location. Publication of the indexes, in part or as a whole, is forbidden."[5] The Archives support their own photographic and conservation studios.

According to the website of the Archives, the oldest surviving document dates back to the end of the eighth century. "Transfers and political upheavals nearly caused the total loss of all the archival material preceding Innocent III."[6] From 1198 onwards, more complete archives exist, though documentation is scant before the 13th century. Since that time, the documentation includes items such as Henry VIII of England's request for a marriage annulment,[7] and letters from Michelangelo.

The entrance to the Archives, adjacent to the Vatican Library, is through the Porta di S. Anna in via di Porta Angelica (rione of Borgo). New underground storage space was added in 1980.[8]

Qualified scholars from institutions of higher education pursuing scientific researches, with an adequate knowledge of archival research, may apply for an entry card. Scholars need an introductory letter by either a recognized institute of research or by a suitably qualified person in the field of historical research. Applicants need to specify their personal data (name, address etc.) as well as the purpose of their research. Undergraduate students are not admitted.

There are strict limitations to what archive users are able to view and access. For example, no materials dated after 1939 are available for public viewing.[9] Pope Francis is considering when to open the full archives of Pope Pius XII.[10]

Opening of the archives

Customarily, documents are made available to the public after a period of 75 years.

To mark the 400th anniversary of the Vatican Archives, 100 original documents dating from the 8th to the 20th century were put on display from February to September 2012 in the "Lux in arcana – The Vatican Secret Archives reveals itself" exhibition held at the Capitoline Museums in Rome. They included the 1521 bull of excommunication of Martin Luther and a letter from Mary, Queen of Scots, written while awaiting her execution.[14][15]

Prefects of the Vatican Secret Archives

There are other Holy See archives in Rome, since each department of the Roman Curia has its own archives. The word "secret" in its modern sense can be applied to some of the material kept by the Apostolic Penitentiary, when it concerns matters of the internal forum; but registers of the rescripts that it issued up to 1564 have been deposited in the Vatican Secret Archives and are open for consultation by qualified scholars. Half of these have already been put in digital form for easier consultation. The confidentiality of the material means that, in spite of the centuries that have passed since 1564, special rules apply to its publication.[16]