William Barnes (22 February 1801 – 7 October 1886) was an English writer, poet, Church of England priest, and philologist. He wrote over 800 poems, some in Dorset dialect, and much other work, including a comprehensive English grammar quoting from more than 70 different languages. 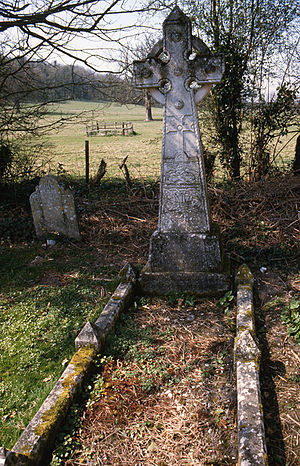 His memorial and grave at St Peter's Church, Winterborne Came

Barnes was born at Rushay in the parish of Bagber, Dorset, the son of a farmer. His formal education finished when he was 13 years old.[1] Between 1818 and 1823 he worked in Dorchester, the county town, as a solicitor's clerk, then moved to Mere in neighbouring Wiltshire and opened a school.[1] During his time here he began writing poetry in the Dorset dialect, as well as studying several languages (Italian, Persian, German and French, in addition to Greek and Latin), playing musical instruments (violin, piano and flute) and practising wood-engraving.[1] He married Julia Miles, the daughter of an exciseman from Dorchester, in 1827, then in 1835 moved back to the county town, where again he ran a school.[1] The school was initially in Durngate Street, then was moved to South Street. A second move to another South Street site made the school a neighbour of an architect's practice where Thomas Hardy was an apprentice. The architect, John Hicks, was interested in literature and the classics, and when disputes about grammar occurred in the practice, Hardy would visit Barnes next door for an authoritative opinion.[1]

Barnes was ordained into the Church of England in 1847, taking a BD degree from St John's College, Cambridge, in 1851.[2] He served curacies at Whitcombe Church in Whitcombe, Dorset, 1847–52, and again from 1862. Between 1860–62 he held a curacy at Rotherham in Yorkshire. He became rector of St Peter's Church, Winterborne Came with Winterborne Farringdon, Dorset, from 1862 to his death. Shortly before his death he was visited at Came Rectory by Thomas Hardy and Edmund Gosse; in a letter, Gosse wrote that Barnes was "dying as picturesquely as he lived":

"We found him in bed in his study, his face turned to the window, where the light came streaming in through flowering plants, his brown books on all sides of him save one, the wall behind him being hung with old green tapestry. He had a scarlet bedgown on, a kind of soft biretta of dark red wool on his head, from which his long white hair escaped on to the pillow; his grey beard, grown very long, upon his breast; his complexion, which you recollect as richly bronzed, has become blanched by keeping indoors, and is now waxily white where it is not waxily pink; the blue eyes, half shut, restless under languid lids."

Barnes first contributed the Dorset dialect poems for which he is best known to periodicals, including Macmillan's Magazine; a collection in book form Poems of Rural Life in the Dorset Dialect, was published in 1844. A second collection Hwomely Rhymes followed in 1858, and a third collection in 1863; a combined edition appeared in 1879. A "translation", Poems of Rural Life in Common English had already appeared in 1868.

Among his other writings is a slim volume on "the Advantages of a More Common Adoption of The Mathematics as a Branch of Education, or Subject of Study", published in 1834.

He was a friend of Thomas Hardy, Lord Tennyson and Gerard Manley Hopkins.

Barnes's poems are characterised by a singular sweetness and tenderness of feeling, deep insight into humble country life and character, and an exquisite feeling for local scenery.

Barnes is buried in Winterborne Came churchyard beneath a Celtic cross. The plinth of the cross has the inscription: 'In Memory of William Barnes, Died 7 October 1886. Aged 86 Years. For 24 Years Rector of this Parish. This Memorial was raised to his Memory by his Children and Grandchildren."[3] There is also a statue of him in Dorchester town centre, outside St Peter's Church in that town.

Barnes had a strong interest in language; he was fluent in Greek, Latin and several modern European languages. He called for the purification of English by removal of Greek, Latin and foreign influences so that it might be better understood by those without a classical education. For example, the word "photograph" (from Greek light+writing) would become "sun-print" (from Saxon). Other terms include "wortlore" (botany), "welkinfire" (meteor) and "nipperlings" (forceps).

This 'Pure English' resembles the 'blue-eyed English' later adopted by the composer Percy Grainger, and sometimes the updates of known Old English words given by David Cowley in How We'd Talk if the English had WON in 1066.

As well as avoiding the use of these foreign words in his poetry, Barnes would often use a repetition of consonantal sounds similar to the Welsh poetry, cynghanedd. Examples of this can be heard in the lines, "Do lean down low in Linden Lea" and "In our abode in Arby Wood".

Where the bridge out at Woodley did stride,

Up above the clear brook that did slide

By the poppies, befoam'd white as snow;

As the gilcups did quiver among

The white deäsies, a-spread in a sheet.

An' she cried "I do praÿ, is the road

Her the way it would turn an' would leäd:

"Goo along by the beech in the nook,

Where the children do plaÿ in the cool,

Aye, the grey blocks o' rock at the pool."

Aye, to her house to vind a new hwome."

I'm asheämed that I wanted know

Any more of her childhood or life

But then, why should so feäir a child grow

Where no father did bide wi' his wife;

Then wi' blushes of zunrisèn morn,

She replied "that it midden be known,

Aye, they hid me when some would be shown."

What! so winnèn, an' still cast azide-

Oh! a child that a squier should own;

Aye, to hide her where others be shown!

* Words once spoken to the writer