From Infogalactic: the planetary knowledge core
Jump to: navigation, search
In this Japanese name, the family name is Yamaoka.

Yamaoka Tesshū (山岡 鉄舟?, June 10, 1836 – July 19, 1888), also known as Ono Tetsutarō or Yamaoka Tetsutarō, was a famous samurai of the Bakumatsu period, who played an important role in the Meiji Restoration. He is also noted as the founder of the Itto Shoden Muto-ryu school of swordsmanship. 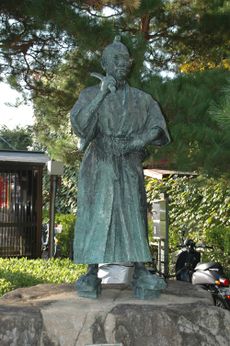 Statue of Yamaoka Tesshu in Takayama

Yamaoka was born in Edo (present-day Tokyo) as Ono Tetsutaro, where his father was a retainer of the Tokugawa Shogunate and his mother was the daughter of a Shinto priest from Kashima Shrine. Yamaoka practiced swordsmanship from the age of nine, starting in the Jikishinkage Ryu tradition. After that he learned Hokushin Ittō-ryū from Inoue Hachirō, who was asked by Yamaoka Tesshū's father to teach his son. Later his family moved to Takayama where he began the Nakanishi-ha Ittō-ryū style of fencing. When he was seventeen, he returned to Edo and joined the government's Kobukan Military Institute and the Yamaoka School of Spear Fighting under Yamaoka Seizan. Not long after Yamaoka had joined the dojo, Seizan died, Yamaoka went on to marry Seizan's sister in order to carry on the Yamaoka name. From an early age, Yamaoka showed dedication and talent in the practice of martial arts. As he grew up, he became well known for several things: his swordsmanship, calligraphy, drinking and sleeping.

In 1856, he became supervising instructor of swordsmanship at the Kobukan. In 1863, he became supervisor of the Roshigumi (a force of ronin or "masterless samurai" serving as a mercenary auxiliary force to the Shogunal army). In 1868, he was appointed chief of the Seieitai, an elite bodyguard for the 15th Shogun Tokugawa Yoshinobu. He went to Sunpu to negotiate with Saigō Takamori, and brought about Saigo's meeting with Katsu Kaishū, thereby contributing to the surrender of Edo Castle to imperial forces. After the Meiji Restoration, he became an official of the Shizuoka Domain, followed by a posting as governor of the short-lived Imari Prefecture. Later, he served in the court of Emperor Meiji as a chamberlain and close aide. Yamaoka died at the age of fifty-two on July 19, 1888 of stomach cancer. Prior to his death, he is said to have composed his death poem first, then sat formally and closed his eyes, slipping into death.[1]

Yamaoka studied the art of swordsmanship thoroughly until the morning of March 30, 1880, at the age of 45, when he became enlightened while in meditation.[2] From this point on, Yamaoka worked to maintain a dojo for his style of combat known as "no-sword" — the point in which a samurai realizes that there is no enemy and that purity of the style is all that is needed. He is famous for his range of Zen art works.

Although he lived well after the "Golden Age of Zen", Yamaoka appears in a handful of modern koan. Three popular koan featuring Yamaoka are listed below.