From Infogalactic: the planetary knowledge core
Jump to: navigation, search
For the North Carolina Governor and US Senator, see Terry Sanford.

Edward Terry Sanford (July 23, 1865 – March 8, 1930) was an American jurist who served as an Associate Justice on the United States Supreme Court from 1923 until his death in 1930. Prior to his nomination to the high court, Sanford served as an Assistant Attorney General under President Theodore Roosevelt from 1905 to 1907, and as a federal district court judge from 1908 to 1923. Sanford is typically viewed as a conservative justice, favoring strict adherence to antitrust laws, and often voted with his mentor, Chief Justice William Howard Taft.[2]

A graduate of Harvard Law School, Sanford practiced law in his hometown of Knoxville, Tennessee, during the 1890s and early 1900s (decade).[2] As Assistant Attorney General, he rose to national prominence as lead prosecutor during the high-profile trial of Joseph Shipp in 1907, which to date is the only criminal trial conducted by the Supreme Court.[3][4]

Sanford's most lasting impact on American law is arguably his majority opinion in the landmark case, Gitlow v. New York (1925). This case, which introduced the incorporation doctrine, helped pave the way for many of the Warren Court's decisions expanding civil rights and civil liberties in the 1950s and 1960s.[2]

Sanford was born in Knoxville in 1865, the eldest son of prominent Knoxville businessman Edward J. Sanford (1831–1902) and Swiss immigrant Emma Chavannes. Sanford's father, as president or vice president of nearly a dozen banks and corporations, was one of the primary driving forces behind Knoxville's late-19th century industrial boom.[5] His maternal grandfather, Adrian Chavannes, was the leader of a group of Swiss colonists who arrived in Tennessee in the late 1840s and his uncle, Albert Chavannes, was a noted author and sociologist. In 1891, Sanford married Lutie Mallory Woodruff, the daughter of Knoxville hardware magnate W.W. Woodruff.[5]

One of Sanford's earliest appearances before the Supreme Court came as an attorney representing the appellant, Knoxville Iron Company, in Knoxville Iron Company v. Harbison (1901). The court ruled in favor of Harbison and upheld states' right to ban companies from paying employees in scrip rather than cash.[7]

Sanford first served in the government as a special assistant to the Attorney General of the United States from 1905 to 1907, and then as Assistant Attorney General in 1907 under President Theodore Roosevelt.[8][8]

As an Assistant Attorney General he was the lead prosecutor in the high profile trial, United States v. Shipp, et al. (1907). This case involved a sheriff, Joseph Shipp, who was convicted of allowing a condemned Negro prisoner, who was the subject of a United States Supreme Court writ of habeas corpus, to be lynched. Sanford's conduct of the trial—and particularly his exemplary closing argument— are said to be part of a "Great American Trial". This is the only criminal trial conducted before the U.S. Supreme Court in which the court exercised original jurisdiction (the court typically only hears criminal cases on appeal).[3][9] It was widely followed in the newspapers.[10] 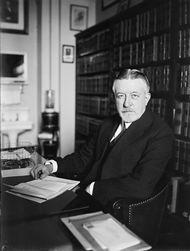 Justice Sanford in his office

Upon the advice of Sanford's friend, Chief Justice William Howard Taft, President Warren Harding nominated Sanford to the Supreme Court on January 24, 1923, to the seat vacated by Mahlon Pitney. Sanford was confirmed by the Senate, and received his commission, on January 29, 1923.[11]

Sanford wrote 130 opinions during his seven years on the Court, including his most well known[11]— the majority opinion in Gitlow v. New York.[2][12] While upholding a state law banning anarchist literature, the opinion in Gitlow implied that some provisions of the Bill of Rights (in this case the First Amendment's free speech provisions) apply with equal force to the states via the Due Process Clause of the Fourteenth Amendment (commonly called "incorporation"). This had "extraordinary consequences for the nationalization of the Bill of Rights during the era of the Warren Court," which used similar reasoning to incorporate other amendments and expand civil liberties.[12][13] Gitlow has been cited as precedent in cases such as Near v. Minnesota (1931),[14] which incorporated the guarantee of freedom of the press, Griswold v. Connecticut (1965), which recognized the constitutional right to privacy,[15] and more recently, McDonald v. Chicago (2010),[16] which incorporated the right to bear arms.

Sanford authored the majority opinion in Okanogan Indians v. United States (commonly called the "Pocket Veto Case"), which upheld the power of the President's "pocket veto". Other noteworthy opinions by him are Taylor v. Voss, 271 U.S. 176 (1926) and Fiske v. Kansas, 274 U.S. 380 (1927).[11] Sanford voted with the majority in Myers v. United States (1926), which upheld the president's authority to remove executive branch officials without the Senate's consent, and in Ex parte Grossman (1925), which extended the president's pardoning power.[17] Sanford concurred with Taft's dissent in Adkins v. Children's Hospital (1923).[17]

Chief Justice Taft is considered by some to have been Justice Sanford's mentor.[2] They routinely sided together in decisions,[2] and were a part of the court's conservative "inner club" that regularly met at the Chief Justice's house for libations and conviviality on Sundays.[13]

Justice Sanford unexpectedly died of uremic poisoning following a tooth extraction in Washington, D.C. on March 8, 1930,[18] just a few hours before Chief Justice William Howard Taft, who himself had retired five weeks prior. As it was customary for members of the court to attend the funeral of deceased members, this posed a "logistical nightmare", necessitating traveling immediately from Knoxville for Sanford's funeral to Washington for Taft's funeral.[19][20] As had been the case in their careers, Chief Justice Taft's death overshadowed Justice Sanford's demise.[2] Sanford is interred at Greenwood Cemetery in Knoxville.[19][21]

Sanford was an active member of Civitan International.[22]