Anthrocon (abbreviated AC) is the world's largest furry convention, taking place in Pittsburgh, Pennsylvania each June or July. Its focus is on furries: fictional anthropomorphic animal characters in art and literature. The convention was first held in 1997 in New York State, and draws over 5,000 attendees annually. Attendance in 2015 was 6,348, with a fursuit parade of 1,460[1] and an estimated economic impact of $5.7 million.[2]

Anthrocon was founded in 1997 as Albany Anthrocon (AAC) in New York State, with a membership of about 500. The convention was renamed to 'Anthrocon' and moved to Valley Forge, Pennsylvania in 1999 and 2000; then to a larger hotel, the Adams Mark, on the outskirts of Philadelphia in 2001. Attendance grew each year, Anthrocon becoming the largest furry convention in 2001 with an attendance of 1,457; It has retained that position of the largest furry convention since. In 2004 it had climbed to 2,404 attendees in its final year at the Adams Mark.

Due to the unforeseen sale of the Adams Mark Hotel in November 2004, Anthrocon chose the Wyndham Franklin Plaza in Philadelphia as the site for its 2005 convention. Attendance that year dropped slightly to 2,373, due in part to higher parking fees, a different and unfamiliar hotel (the Wyndham Franklin Plaza in downtown Philadelphia), and possibly due to Hurricane Dennis's effect on the southern United States which closed many airports and prevented people from traveling. In June 2005, a contract with the Westin Convention Center Hotel in Pittsburgh was signed, and Anthrocon was scheduled to be held at the adjoining David L. Lawrence Convention Center between June 15 and 18, 2006. Despite concerns that the move to Pittsburgh would decrease attendance, it actually rose to 2,489, which was enough to ensure the future of the convention in Pittsburgh.

Anthrocon 2010 had an attendance of 4,238, the first furry convention to exceed 4,000 members; and by 2012 saw 5,179 attendees, with a Fursuit Parade exceeding 1,000. The admission price was also set overall at $60 for a four-day pass, though pre-registered attendees paid $50.[7] In 2013, Anthrocon contracted roomspace with seven of Pittsburgh's ten downtown hotels.

The chairman of the convention since 1999, Dr. Samuel Conway (nicknamed "Kagemushi" or "Uncle Kage" among attendees), oversees the operations of Anthrocon, with the help of convention staff and volunteers who donate their time and energy throughout the weekend to assist the multitude of small tasks which arise. Since 1997, Anthrocon has raised more than $200,000 for animal-related charities.[3] 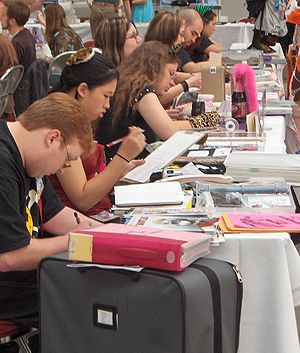 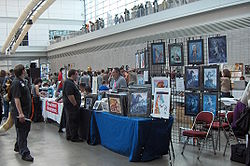 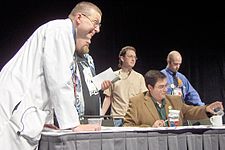 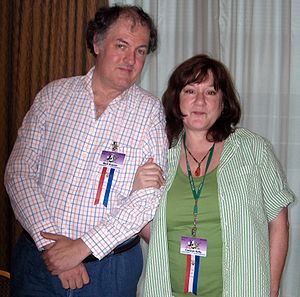 There are areas open most of the day to accommodate sales by Dealers and Artists as well as an area to congregate and socialize (see "The Zoo" below).

Anthrocon provides a number of specialized 'tracks' of programming with similar furry based themes and scheduled 'events'.[8][9]

The programming tracks involve discussions and work groups focused on the application of furry in Art, Comedy and Improv, Computer Gaming, Costuming (Fursuits), Music, Puppetry, Role-Playing (both gaming and real-life), and Writing.

The scheduled events that take place are the Charity Auction, the Masquerade, the Fursuit Parade, nightly dances, Art Show Auctions, and special presentations by Uncle Kage and "2 the Ranting Gryphon".[10]

Themes and Guests of Honor by year

Every year the convention has several Guests of Honor – prominent individuals who are compensated for their attendance and travel expenses. Past Guests of Honor at Anthrocon have included:[17][18]