Arkhaven Comics is a comics imprint created by the publishers Castalia House that was started in early 2018. It publishes both paper and digital comics, and focuses on developing original comics titles and series. Its best-known title is Alt★Hero and its most famous writer is the award-winning creator of Bane, Chuck Dixon. The company also utilizes the Dark Legion Comics imprint, which publishes comics created by other individuals and companies.

The imprint started as a project to create comics that were free from the dominant political influence of the two major comics publishing houses Marvel and DC Comics. These houses were widely believed to have increasingly come under the influence of a so-called social justice trend. Both publishing houses have been reported to have suffered from declining comics sales of nearly 10 percent annually as they introduced more characters said to be politically correct, even as the value of their brands and traditional intellectual property have increased significantly. Arkhaven has enjoyed rapid growth and multiple Amazon bestsellers as a result.

The imprint has been exceptionally successful at crowdfunding, as its three campaigns undertaken to support the creation of new series have averaged over $160,000 each.

In 2020, Arkhaven started to publish numerous comics online, in the format of serialized webtoons.[1] In April 2021, the new online comics platform Arktoons was announced. It features vertically-displayed comics panels in the Webtoons style that are easier to read on smartphones and tablets.[2] 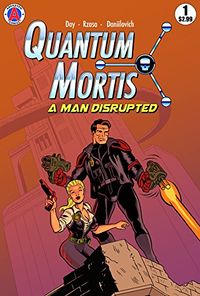 Also in development was the new fantasy series "Saga of the Swan Knight" by Will Caligan, based on the John C. Wright trilogy.[11] This 12-issue series was announced after a FreeStartr campaign, and is to be succeeded by the 6-issue series "The Stars Came Back", based on the Rolf Nelson novel.[12]

Arkhaven continued to publish further titles in the Alt★Hero lines, such as Alt★Hero: Avalon and Alt★Hero: Q, as well as other series.[21][22] On October 11, 2018, the successful Alt★Hero: Q crowdfunding campaign was shut down retroactively by Indiegogo, allegedly for politically progressive reasons. The shutdown was a small part of 2018's online "censorship wars", that had seen the deplatforming of right-wing content creators. A class action lawsuit against the site was pending. [23] Within weeks, Arkhaven reported they had independently raised the needed money.[24] Jon Del Arroz's "The Ember War" Arkhaven Comics campaign continued on Indiegogo. Alt★Hero:Q issue #1 "Where We Go One" was released in digital formats in early April 2019, and in print two months later.[25]

In early 2020, an upcoming six-issue comic special adaptation of Vox Day's novel "A Throne of Bones" was announced under Chuck Dixon.[27] Arkhaven's first individual superhero series will focus on Shade, who appeared in the first volume of Alt★Hero. It will be written by Chuck Dixon and illustrated by Cliff Cosmic.[28][29]

In July 2019, imprint co-founder Vox Day announced that production had begun on the first Arkhaven film, to be titled Rebel's Run. It would be made by the new film production company Viral Films Media. Scooter Downey was announced as the film's director.[35][36][37]