Army Group Vistula (German: 'Heeresgruppe Weichsel') was an Army Group of the Wehrmacht, formed on 24 January 1945. It was put together from elements of Army Group A (shattered in the Soviet Vistula-Oder Offensive), Army Group Centre (similarly largely destroyed in the East Prussian Offensive), and a variety of new or ad hoc formations. It was formed to protect Berlin from the Soviet armies advancing from the Vistula River. 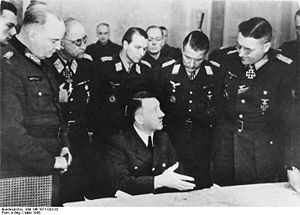 Briefing at the headquarters of Army Group Vistula

Heinz Guderian had originally urged the creation of a new army group as an essentially defensive measure to fill the gap opening in German defences between the lower Vistula and the lower Oder.[1]

The new Army Group Vistula was duly formed from an assortment of rebuilt, new and existing units. Guderian intended to propose Field-Marshal Maximilian von Weichs as commander.[2] However, in a reflection of Hitler's desire to transfer control of the conflict from the Wehrmacht to the SS, Heinrich Himmler was appointed.[3] Himmler, who lacked any real military knowledge,[lower-alpha 1] proved inadequate to the task; General Gotthard Heinrici replaced Himmler as commander of Army Group Vistula on 20 March, subsequent to its participation in the German offensive codenamed Operation Solstice and the following defence against the Soviet East Pomeranian Offensive.

Other than Operation Solstice, the Army Group's only offensive action was a disastrous attempt to relieve the fortress of Kustrin late in March 1945, during which the subordinate XXXIX Panzer Corps took heavy casualties.

Under the command of Heinrici, parts of the army group fought through the Battle of Berlin and Battle of Halbe, with some of its elements not surrendering until the end of the war in Europe on 8 May 1945. Army Group Vistula's strength was in the region of 500,000 troops;[4] in general, the army group was poorly equipped, many of its units being little more than the 'paper' formations typical of the German military at the end of World War II. Indeed, when first set up it was found that the army group lacked many essential facilities, such as proper maps or a headquarters signals detachment—the sole means of communication being Himmler's private telephone.[5]

The Army Group was originally formed from:

During the East Pomeranian Offensive, the Second Army was finally cut off from the remainder of the army group and withdrew into Danzig, where it was eventually destroyed. The rest of Army Group Vistula was forced west of the Oder, though the Third Panzer Army retained a small bridgehead at Altdamm until the middle of March.

Towards the end of April, the Twenty-First Army (itself formed around the remnants of the Fourth Army, which had been destroyed in the Heiligenbeil Cauldron) was added to Army Group Vistula.