From Infogalactic: the planetary knowledge core
(Redirected from B-45 Tornado)
Jump to: navigation, search

The end of World War II resulted in the cancellation of many projects and delayed many others. In 1946, rising tensions with the Soviet Union caused the US Air Force to assign higher priorities to jet bomber development and production. By mid-1946, the XB-45 and Convair XB-46 neared completion, but the Boeing XB-47 and Martin XB-48 were still two years away. The USAAF chose to evaluate the first two designs to determine which would be superior operationally. The B-45 proved a superior design, and on January 2, 1947, a contract for immediate production of B-45As was signed. It had been planned to equip five light bomb groups and three light reconnaissance groups with B-45As, but as the B-47's development and flight-testing made future production all but certain, the future of the B-45 became increasingly uncertain, and in mid-1948 the U.S. Air Staff began to question its value. Soon afterwards, President Truman's budget restraints reduced Air Force expenditure and B-45 production was reduced to a total of 142 airframes. Further budget cuts in 1950 forced the Aircraft and Weapons Board to cancel 51 of the 190 aircraft on order. The B-45 was later replaced by the supersonic Convair B-58 Hustler.

Continuously plagued by engine problems along with numerous other minor flaws, the B-45 regained importance when after the United States entered the Korean War in 1950, it proved its value both as a bomber and as a reconnaissance aircraft. The mass dedication of U.S. forces to the Korean War revealed the vulnerability of North Atlantic Treaty Organization forces in Europe to Soviet attack, and it was in this light that the Air Force made an important decision about the future of the B-45. The B-45, like most post-World War II U.S. bombers, could carry both nuclear and conventional bombs. The progress of weapons technology had led to a great reduction in the weight and size of nuclear weapons in the U.S. inventory, effectively allowing smaller aircraft such as the B-45 to carry out nuclear strikes, a mission which had initially been limited to heavy bombers. Suddenly, the small fleet of B-45s had great value again as a nuclear deterrent.

Operation Fandango, sometimes called Operation Backbreaker, entailed modifications to the aircraft for nuclear missions. In addition, the 40 B-45s allocated to the program were equipped with a new defensive system and extra fuel tanks. Despite the magnitude of the modifications project, plus ongoing problems with the early jet engines, atomic-capable B-45s began reaching the United Kingdom in May 1952, and deployment of the 40 aircraft was completed in mid-June. It was at about this same time that RB-45s of the 323rd Strategic Reconnaissance Squadron began to arrive in Japan to fly alongside the 91st Strategic Reconnaissance Squadron, supplementing the WWII era piston-engine RB-29s which had proved to be easy targets for North Korean MiGs.[4] The RB-45s provided valuable intelligence throughout the remainder of the Korean War, despite the limited number of airframes which were available. RB-45Cs flew many daylight missions until early 1952, when they were converted to night operations after an RB-45 was almost lost to a MiG-15.[5] 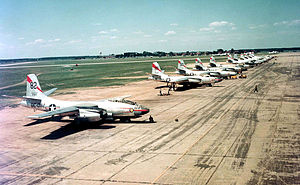 All 33 RB-45Cs built were assigned to the 91st Strategic Reconnaissance Wing's 322nd, 323rd and 324th Strategic Reconnaissance Squadrons. The RB-45C also flew several long-range reconnaissance missions over the Soviet Union during the mid-1950s. On July 29, 1952, an RB-45C made the first non-stop trans-Pacific flight, having been refueled twice by KB-29s along the way. Maj. Lou Carrington and his crew of the 91st Reconnaissance Wing flew from Alaska to Japan in 9 hrs 50 mins, winning the MacKay Trophy for their achievement. Within the 91st SRW, by 1954 the RB-45C had been replaced by the RB-47E. The phased-out RB-45Cs went to the 19th Tactical Reconnaissance Squadron, which operated them until they were withdrawn from operational use in the spring of 1958.

By the end of the 1950s, all B-45s had been removed from active duty service. However, a few continued to act as test aircraft into the early 1970s.[6]

The only other nation to use the RB-45C was the United Kingdom, where it was operated by an ad hoc unit of crews largely drawn from Nos. 35 and 115 squadrons. Whilst the USAF was prohibited by the President of the United States from overflying the Soviet Union unless under a state of war, US allies closer to the European theatre of war could. In the United Kingdom, whilst successive Labour governments had refused, the return of Winston Churchill and a Conservative administration to Downing Street had brought a change of options.

As a result, under Operation Ju-jitsu, in July 1951 four aircraft were bailed to Britain from the 91st Strategic Reconnaissance Wing to form a Royal Air Force (RAF) Special Duties Flight [clarification needed] commanded by Squadron Leader John Crampton. Stripped of all USAF markings and then applied with RAF markings, the four aircraft were attached to a USAF squadron based in RAF Sculthorpe, Norfolk in eastern England. The aircraft were tasked with flying deep-level reconnaissance missions over the Soviet Union to gather electronic and photographic intelligence. The Special Duties Flight conducted missions during the period 1952–54.

On April 17, 1952, three aircraft were tasked to head for Kiev from Germany, scheduled to return to Sculthorpe ten hours later. Flying at 36,000 feet (11,000 m), Crampton's aircraft was tracked by ground radar and came under anti-aircraft fire. Applying full power, he immediately turned and headed for Germany, none too soon, as Soviet night fighters had been dispatched to hunt down his aircraft.[7]

Subsequent flights over the Soviet Union were carried out using English Electric Canberras under the codename Project Robin, operating at higher altitudes of around 54,000 ft (16,000 m). It was not until 1994 (under the "fifty-year rule" of the Public Records Act 1958) that the existence of the spy missions became public knowledge.

The first flight of the XB-45 was on March 17, 1947 from Muroc Army Air Field. A total of 131 test flights were flown by the three prototype aircraft, one being destroyed early on, killing two pilots.

The USAF accepted one of the two surviving aircraft on July 30, 1948, the other on August 31. One was damaged beyond repair in an accident. The last XB-45 was delivered to Wright-Patterson Air Force Base in 1949. It proved excessively difficult to maintain and was relegated as a ground trainer.

The B-45A differed from the XB-45 in having improved ejection seats and communications equipment, an E-4 automatic pilot and bombing navigation radar.

The first production B-45 flew in February 1948, and the Air Force took delivery of 22 B-45s in April 1948. Powered by J35 turbojets and not considered combat-ready, they were assigned to training duties and to conduct various test programs. The next batch were powered by the more powerful J47 turbojets. The first B-45As entered service in November 1948 with the 47th Bombardment Group, and the initial order of 96 was completed in March 1950.

The first B-45As were not equipped with bomb-fire control systems or bombsights. They suffered from gyrocompass failures at high speeds, unhooked bomb shackles, engine fires, and inaccurate cockpit gauges. The AN/APQ-24 bombing and navigation radar on some B-45s was maintenance heavy, and malfunctions in the pressurization pump limited the altitude at which the aircraft could operate.

Fifty-five nuclear-capable B-45s arrived in the United Kingdom in 1952. These were modified with a 1,200 gal (4,542 l) fuel tank in the aft bomb bay. Despite technical problems, these were Tactical Air Command's first-line deterrent in Europe.

The B-45B was a proposed variant of the B-45A with improved radar and fire-control systems. None were built.[8] 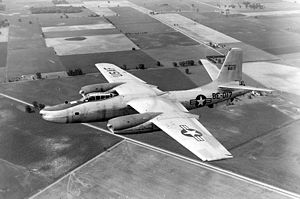 The B-45C was the first multi-jet engined bomber in the world to be refueled in mid-air. It carried two 1,200 gal (4,542 l) wingtip fuel tanks, had a strengthened canopy, and an inflight refueling receptacle. The first B-45C was flown on May 3, 1949. Only ten were built, and the remaining 33 under construction were converted to RB-45Cs.

The RB-45C was the final production variant of the B-45. The bombardier's canopy was faired over and replaced with an oblique camera system. The RB-45C carried two 214 gal (810 l) external fuel tanks, or two JATO rockets. It could carry up to 12 cameras in four positions, or a single camera with a 100 in (2.5 m) focal length lens. The RB-45C first flew in April 1950, and was delivered from June 1950 to October 1951. Thirty-eight were built, including the 33 converted from B-45Cs.[4] It was this variant that was operated (clandestinely) over the Soviet Union by the RAF "special duties" unit at RAF Sculthorpe, with the first sortie of three aircraft commanded by Squadron Leader John Crampton taking place on the night of April 17, 1952. 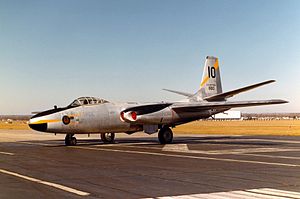 Three B-45s have survived to the present day. 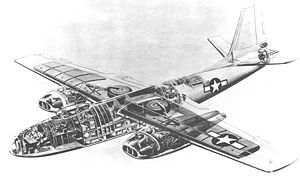 Cutaway view of B-45 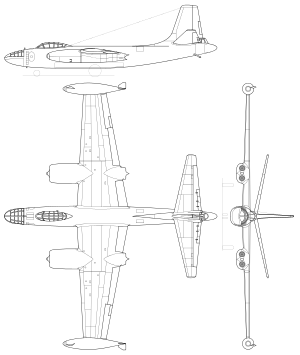 The War of the Worlds and The Magnetic Monster (both 1953 films) show stock footage of the B-45.

A B-45 also featured prominently in the Buck Danny album Planes Without Pilots by Jean-Michel Charlier and Victor Hubinon.