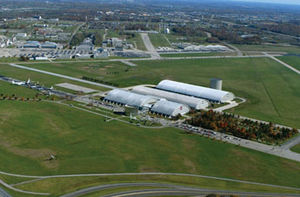 The museum dates to 1923 when the Engineering Division at Dayton's McCook Field first collected technical artifacts for preservation. In 1927 it moved to then-Wright Field in a laboratory building. In 1932 the collection was named the Army Aeronautical Museum and placed in a WPA building from 1935 until WWII. In 1948 the collection remained private as the Air Force Technical Museum.[4] In 1954 the Air Force Museum became public and was housed in its first permanent facility, Building 89 of the former Patterson Field in Fairborn, which had been an engine overhaul hangar. Many of its aircraft were parked outside and exposed to the weather. It remained there until 1971 when the current facility first opened. Not including its annex on Wright Field proper, the museum has more than tripled in square footage since its inception in 1971 with the addition of a second hangar in 1988 and a third in 2003.[5][6]

The museum is a central component of the National Aviation Heritage Area.[7]

The museum's collection contains many rare aircraft of historical or technological importance, and various memorabilia and artifacts from the history and development of aviation. The permanent collections include one of four surviving Convair B-36s, the only surviving XB-70 Valkyrie, and Bockscar—the B-29 Superfortress that dropped an atomic bomb on Nagasaki during the last days of World War II.

The museum launched their 360-degree Virtual Tour in 2010. Visitors can now view the majority of the museum's aircraft and exhibits online.

The museum has several Presidential aircraft, including those used by Franklin D. Roosevelt, Harry Truman, and Dwight D. Eisenhower. The centerpiece of the Presidential aircraft collection is SAM 26000, a modified Boeing 707 known as a VC-137C, used regularly by Presidents John F. Kennedy through Richard Nixon's first term; after which it became the backup Presidential aircraft. This aircraft took President and Mrs. Kennedy to Dallas on November 22, 1963—the day of the President's assassination. Vice President Lyndon B. Johnson was sworn in as President aboard it shortly after the assassination—and the plane then carried President Kennedy's body back to Washington.[8] It was temporarily removed from display on December 5, 2009, to be repainted. It was placed back on display in the museum on President's Day, 2010.[9]

All presidential aircraft are now displayed in the Presidential Hangar, next to the R&D/Flight Test Hangar west of the USAF Museum. As both hangars are behind the perimeter fence on Wright-Patterson AFB property, the general public can only visit them by tour bus.

A large section of the museum is dedicated to pioneers of flight, especially the Wright Brothers, who conducted some of their experiments at nearby Huffman Prairie. A replica of the Wrights' 1909 Military Flyer is on display, as well as other Wright brothers artifacts. The building also hosts the National Aviation Hall of Fame, which includes several educational exhibits. 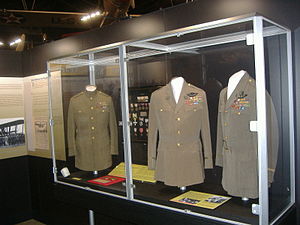 The museum has a large inventory of U.S. Army Air Forces and U.S. Air Force clothing and uniforms in its collection. At any time, over fifty WW II vintage A-2 leather flying jackets are on display, many of which belonged to famous figures in Air Force history. Others are painted to depict the air planes and missions flown by their former owners. Included in the museum's displays are the jacket worn by Brigadier General James Stewart, P-38 ace Major Richard I. Bong's sheepskin B-3 jacket and boots, an A-2 jacket worn by one of the few USAAF pilots to leave the ground during the attack on Pearl Harbor, and President Ronald Reagan's USAAF peacoat.

Other exhibits and attractions

The museum completed the construction of a third hangar and hall of missiles in 2004. It now houses post-Cold War era planes such as the B-2 Spirit stealth bomber (test aircraft), the F-117 Nighthawk stealth ground attack aircraft and others. Construction of a fourth hangar to house the museum's space collection, presidential planes, and an enlarged educational outreach area is nearing completion, which will make these collections, currently housed in an annex requiring a bus trip onto WPAFB, more accessible to the public.

The museum has an IMAX theater that shows, for a fee, aviation and space oriented IMAX films interspersed primarily with other documentaries.

The museum owns other USAF aircraft, to include former U.S. Army Air Service, USAAC or USAAF aircraft, that are on loan to other aerospace museums in the United States and overseas, as well as those on permanent static display at various U.S. Air Force installations and tenant activities world-wide and at Air Force Reserve and Air National Guard installations across the United States. The museum also oversees those aircraft, missiles and associated artifacts loaned to communities or civic organizations for display at civilian airports (many of them former USAAF and/or USAF bases), public parks and memorials, the facilities of military-affiliated organizations (e.g., VFW, American Legion, etc.), or in other similar venues. Most of these loaned aircraft duplicate aircraft exhibited by the museum. These other aircraft continue to remain the property of the Department of the Air Force and are typically identified at these locations as being "On Loan from the National Museum of the U.S. Air Force." The museum's staff has very high standards for the restoration and quality of care of loaned assets and has, in the past, revoked these loans when it was deemed that these other museums did not have the resources to properly care for an artifact. This happened in the case of the famous B-17, Memphis Belle.

The National Museum of the U.S. Air Force is in the midst of a multi-phase, long-term expansion plan. The Air Force Museum Foundation is currently supporting a major capital construction program to expand the museum's current one million square feet of exhibit space with a fourth building that will house the Space Gallery, Presidential Aircraft Gallery, and Global Reach Gallery.

In 2013, the Air Force Museum Theater upgraded its theater from IMAX to digital 3D. This upgrade included a new stage, theater seats, and a new theater screen to support a broader range of programming—including educational presentations, live broadcasts, and expanded documentary choices. The renovations include a 7.1 surround-sound system, audio devices for the hearing or visually impaired, and personal closed captioning systems.[10]

The museum is divided into galleries that cover broad historic trends in military aviation. These are further broken down into exhibits that detail specific historical periods and display aircraft in historical context.

All aircraft in this list were designed/built in the United States of America, unless otherwise indicated. 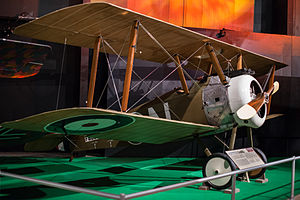 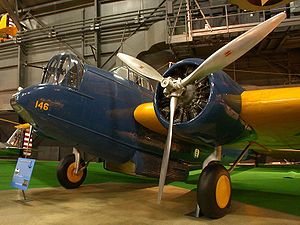 Martin YB-10, the only known survivor, on display at the museum 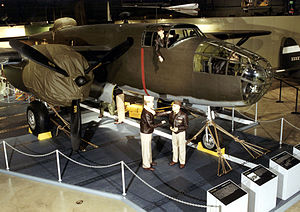 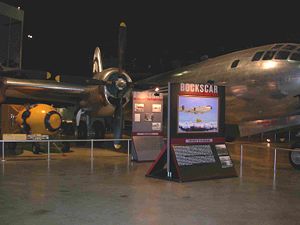 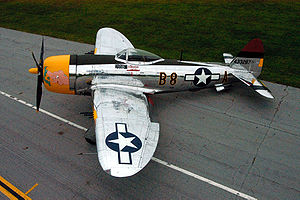 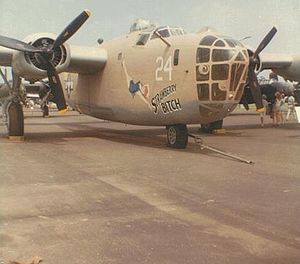 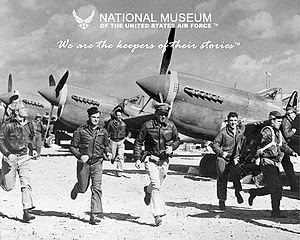 This photo showing a group of P-40 pilots in the CBI running to their aircraft is the latest NMUSAF wallpaper with the We are the keepers of their stories theme. 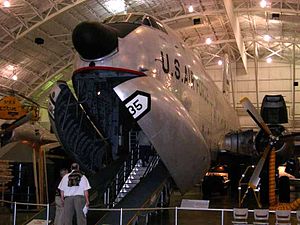 C-124 Globemaster II at the museum 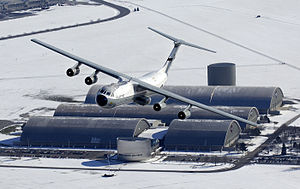 Panorama of the Cold War gallery 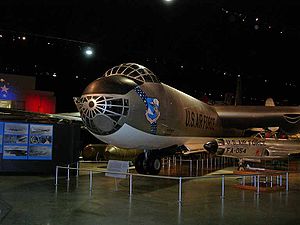 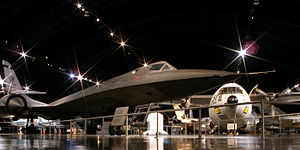 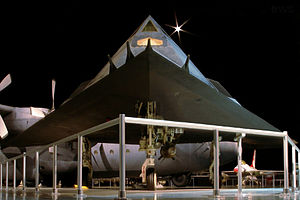 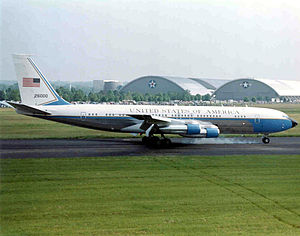 The Air Force Museum Foundation is a private, non-profit organization that supports the mission and goals of the National Museum of the U.S. Air Force.[15]