Beringia is a loosely defined region surrounding the Bering Strait, the Chukchi Sea, and the Bering Sea. It includes parts of Chukotka and Kamchatka in Russia as well as Alaska in the United States. The area includes land lying on the North American plate, and Siberian land east of the Siberian Chersky Range. In historical contexts it also includes the Bering land bridge, an ancient land bridge that was up to 1,000 kilometres (620 mi) wide at its greatest extent and which covered an area as large as British Columbia and Alberta together[1] (1,600,000 square kilometres (620,000 sq mi)). This land bridge connected Asia and North America at various times during the Pleistocene ice ages.

The term Beringia was coined by the Swedish botanist Eric Hultén in 1937.[2] During the ice ages, Beringia, like most of Siberia and all of north and northeast China, was not glaciated because snowfall was very light.[3] It was a grassland steppe, including the land bridge, that stretched for hundreds of kilometres into the continents on either side. It is believed that a small human population of at most a few thousand survived the Last Glacial Maximum in Beringia, isolated from its ancestor populations in Asia for at least 5,000 years, before expanding to populate the Americas sometime after 16,500 years ago, during the Late Glacial Maximum as the American glaciers blocking the way southward melted,[4][5][6][7] but before the bridge was covered by the sea about 11,000 years BP[8]

Before European colonization Beringia was inhabited by the Yupik peoples on both sides of the straits. This culture remains in the region today along with others. In 2012, the governments of Russia and the United States announced a plan to formally establish "a transboundary area of shared Beringian heritage". Among other things this agreement would establish close ties between the Bering Land Bridge National Preserve and the Cape Krusenstern National Monument in the United States and the planned Beringia National Park in Russia.[9]

During the last glacial period, enough of the earth's water became frozen in the great ice sheets covering North America and Europe to cause a drop in sea levels. For thousands of years the sea floors of many interglacial shallow seas were exposed, including those of the Bering Strait, the Chukchi Sea to the north, and the Bering Sea to the south. Other land bridges around the world have emerged and disappeared in the same way. Around 14,000 years ago, mainland Australia was linked to both New Guinea and Tasmania, the British Isles became an extension of continental Europe via the dry beds of the English Channel and North Sea, and the dry basin of the South China Sea linked Sumatra, Java and Borneo to the Asian mainland.

The rise and fall of global sea levels in several periods of the Pleistocene era submerged and exposed the bridging land mass between Asia and North America. The Beringian land bridge is believed to have been exposed both during the glaciation that occurred before 35,000 Before Present (BP) and during the more recent period 22,000–17,000 years BP. The strait reopened about 15,500 BP[10] and by about 11,000 years BP[11] the coastlines were close to their present configurations. Isostatic rebound has continued to raise some sections of coast.

The ice-free heartland of Beringia served as a giant ecological refugium during maximal glaciation for those tundra plants that could survive its windswept Arctic desert conditions.[12] But Beringia constantly transformed its ecosystem as the changing climate affected the environment, determining which plants and animals were able to survive. The land mass could be a barrier as well as a bridge: during colder periods, glaciers advanced and precipitation levels dropped. During warmer intervals, clouds, rain and snow altered soils and drainage patterns. Fossil remains show that spruce, birch and poplar once grew beyond their northernmost range today, indicating that there were periods when the climate was warmer and wetter. The environmental conditions were not homogenous in Beringia. Recent stable isotope studies of woolly mammoth bone collagen demonstrate that western Beringia (Siberia) was colder and drier than eastern Beringia (Alaska and Yukon), which were more ecologically diverse.[13] Mastodons, which depended on shrubs for food, were uncommon in the open dry tundra landscape characteristic of Beringia during the colder periods. In this tundra, mammoths flourished instead. The extinct pine species Pinus matthewsii has been described from Pliocene sediments in the Yukon areas of the refugium.[14]

Main articles: Settlement of the Americas and Paleo-Indians 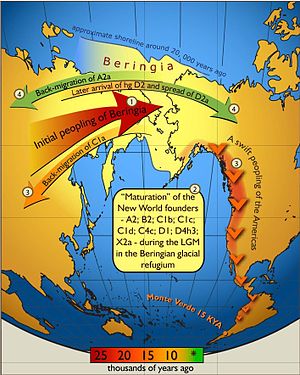 The Bering land bridge is a postulated route of human migration to the Americas from Asia about 20,000 years ago.[15] A study[16] has indicated that of the people who migrated across this land bridge at that time, only 70 left their genetic print in modern descendants, a minute effective founder population (this is easily misread as implying that only 70 people crossed to North America.) Seagoing coastal settlers may also have crossed much earlier, but scientific opinion remains divided on this point, and the coastal sites that would offer further information now lie submerged in up to a hundred metres of water offshore. Land animals migrated through Beringia as well, introducing to North America species that had evolved in Asia: mammals such as proboscideans and lions, which evolved into now-extinct endemic North American species; and allowing equids and camelids that had evolved in North America (and later became extinct there) to migrate to Asia.

A study published in 2007 suggests that the Bering land bridge migration occurred 12,000 years ago, that every human who migrated across the land bridge came from Eastern Siberia, and that every Native American directly descends from that same group of Eastern Siberian migrants.[17] The authors note that a "[u]nique genetic variant widespread in natives across both continents suggests that the first humans in the Americas came in a single migration or multiple waves from a single source, not in waves of migrations from different sources".

Biogeographical evidence demonstrates previous connections between North America and Asia. Similar dinosaur fossils occur both in Asia and in North America. For instance the dinosaur Saurolophus was found in both Mongolia and western North America. Relatives of Troodon, Triceratops, and even Tyrannosaurus rex all came from Asia.

Fossils in China demonstrate a migration of Asian mammals into North America around 55 million years ago. By 20 million years ago, evidence in North America shows a further interchange of mammalian species. Some, like the ancient saber-toothed cats, have a recurring geographical range: Europe, Africa, Asia, and North America. The only way they could reach the New World was by the Bering land bridge. Had this bridge not existed at that time, the fauna of the world would be very different.

Researchers have started to use molecular phylogenetics to trace the history of faunal exchange and diversification, through the genetic history of parasites and pathogens of North American ungulates. An international Beringian Coevolution Project is collaborating to provide material to assess the pattern and timing of faunal exchange and the potential impact of past climatic events on differentiation.