Books of the Bible

From Infogalactic: the planetary knowledge core
Jump to: navigation, search
For the edition of the Bible without chapters and verses, see The Books of the Bible.

Different religious groups include different books in their Biblical canons, in varying orders, and sometimes divide or combine books. Christian Bibles range from the sixty-six books of the Protestant canon to the eighty-one books of the Ethiopian Orthodox Tewahedo Church canon.

The Tanakh (sometimes called the Hebrew Bible) contains twenty-four books divided into three parts: the five books of the Torah ("teaching"); the Nevi'im ("prophets"); and the Ketuvim ("writings"). The first part of Christian Bibles is called the Old Testament, which contains, at minimum, the above twenty-four books but divided into thirty-nine books and ordered differently.

The Catholic Church and Eastern Christian churches also hold that certain deuterocanonical books and passages are part of the Old Testament canon. The second part is the New Testament, containing twenty-seven books; the four Canonical gospels, Acts of the Apostles, twenty-one Epistles or letters and the Book of Revelation.

The Eastern Orthodox, Oriental Orthodox, and Assyrian Christian churches may have minor differences in their lists of accepted books. The list given here for these churches is the most inclusive: if at least one Eastern church accepts the book it is included here.

Rabbinic Judaism recognizes the 24 books of the Masoretic Text, commonly called the Tanakh or Hebrew Bible, as authoritative.[1] There is no scholarly consensus as to when the Hebrew Bible canon was fixed: some scholars argue that it was fixed by the Hasmonean dynasty (140-40 BCE),[2] while others argue it was not fixed until the second century CE or even later.[3] A popular former theory is that the Torah was canonized c. 400 BCE, the Prophets c. 200 BCE, and the Writings c. 100 CE,[4] perhaps at a hypothetical Council of Jamnia as concluded by Heinrich Graetz in 1871. The Council of Jamnia theory is increasingly rejected by most modern scholars.[3][5][6][7][8]

Protocanonical books of the Old Testament

Protestants and Catholics[9] use the Masoretic Text as the textual basis for their translations of the protocanonical books (those accepted as canonical by both Jews and all Christians), with various changes derived from a multiplicity of other ancient sources (such as the Septuagint, the Vulgate, the Dead Sea Scrolls, etc.), while generally using the Septuagint and Vulgate, now supplemented by the ancient Hebrew and Aramaic manuscripts, as the textual basis for the deuterocanonical books.

The Eastern Orthodox use the Septuagint (translated in the 3rd century BCE) as the textual basis for the entire Old Testament in both protocanonical and deuteroncanonical books—to use both in the Greek for liturgical purposes, and as the basis for translations into the vernacular.[10][11] Most of the quotations (300 of 400) of the Old Testament in the New Testament, while differing more or less from the version presented by the Masoretic text, align with that of the Septuagint.[12]

Deuterocanonical books of the Old Testament

The books which is said largely written during the intertestamental period, are called the Biblical apocrypha ("hidden things") by Protestants, the deuterocanon ("second canon") by Catholics, and the deuterocanon or anagignoskomena ("worthy of reading") by Orthodox. These are works recognized by the Roman Catholic, Eastern Orthodox, and Oriental Orthodox Churches as being part of scripture (and thus deuterocanonical rather than apocryphal), but Protestants do not recognize them as divinely inspired. Orthodox differentiate scriptural books by omitting these (and others) from corporate worship and from use as a sole basis for doctrine.[citation needed]

Many recognize them as good, but not on the level of the other books of the Bible. Anglicanism considers the apocrypha "read for example of life" but not used "to establish any doctrine."[13] Luther made a parallel statement in calling them: "not considered equal to the Holy Scriptures, but are useful and good to read."[14]

The difference in canons derives from the difference in the Masoretic Text and the Septuagint. Books found in both the Hebrew and the Greek are accepted by all denominations, and by Jews, these are the protocanonical books. Catholics and Orthodox also accept those books present in manuscripts of the Septuagint, an ancient Greek translation of the Old Testament with great currency among the Jews of the ancient world, with the coda that Catholics consider 3 Esdras and 3 Maccabees apocryphal.

Most quotations of the Old Testament in the New Testament, differing by varying degrees from the Masoretic Text, are taken from the Septuagint. Daniel was written several hundred years after the time of Ezra, and since that time several books of the Septuagint have been found in the original Hebrew, in the Dead Sea Scrolls, the Cairo Geniza, and at Masada, including a Hebrew text of Sirach (Qumran, Masada) and an Aramaic text of Tobit (Qumran); the additions to Esther and Daniel are also in their respective Semitic languages.

The unanimous consensus of modern (and ancient) scholars consider several other books, including 1 Maccabees and Judith, to have been composed in Hebrew or Aramaic. Opinion is divided on the book of Baruch, while it is acknowledged that the Epistle of Jeremiah, the Wisdom of Solomon, and 2 Maccabees are originally Greek compositions.

Additional books accepted by the Syrian Orthodox (due to inclusion in the Peshitta):

The Ethiopian Tewahedo church accepts all of the deuterocanonical books of Catholicism and anagignoskomena of Eastern Orthodoxy except for the four Books of Maccabees.[17] It accepts the 39 protocanonical books along with the following books, called the "narrow canon".[18] The enumeration of books in the Ethiopic Bible varies greatly between different authorities and printings.[19]

The table uses the spellings and names present in modern editions of the Bible, such as the New American Bible Revised Edition, Revised Standard Version and English Standard Version. The spelling and names in both the 1609–1610 Douay Old Testament (and in the 1582 Rheims New Testament) and the 1749 revision by Bishop Challoner (the edition currently in print used by many Catholics, and the source of traditional Catholic spellings in English) and in the Septuagint differ from those spellings and names used in modern editions that derive from the Hebrew Masoretic text.[20]

In the spirit of ecumenism more recent Catholic translations (e.g., the New American Bible, Jerusalem Bible, and ecumenical translations used by Catholics, such as the Revised Standard Version Catholic Edition) use the same "standardized" (King James Version) spellings and names as Protestant Bibles (e.g., 1 Chronicles, as opposed to the Douaic 1 Paralipomenon, 1-2 Samuel and 1-2 Kings, instead of 1-4 Kings) in those books universally considered canonical—the protocanonicals.

The Talmud in Bava Batra 14b gives a different order for the books in Nevi'im and Ketuvim. This order is also quoted in Mishneh Torah Hilchot Sefer Torah 7:15. The order of the books of the Torah are universal through all denominations of Judaism and Christianity.

The disputed books, included in one canon but not in others, are often called the Biblical apocrypha, a term that is sometimes used specifically to describe the books in the Catholic and Orthodox canons that are absent from the Jewish Masoretic Text and most modern Protestant Bibles. Catholics, following the Canon of Trent (1546), describe these books as deuterocanonical, while Greek Orthodox Christians, following the Synod of Jerusalem (1672), use the traditional name of anagignoskomena, meaning "that which is to be read." They are present in a few historic Protestant versions; the German Luther Bible included such books, as did the English 1611 King James Version.[13]

Empty table cells indicate that a book is absent from that canon.

Several of the books in the Eastern Orthodox canon are also found in the appendix to the Latin Vulgate, formerly the official Bible of the Roman Catholic Church.

Diagram of the development of the Old Testament 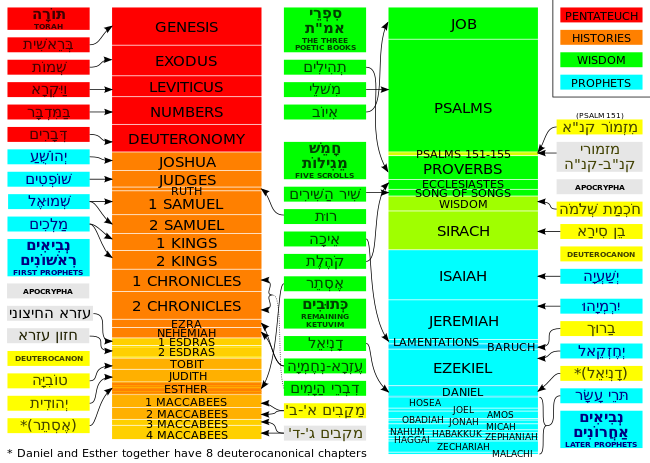 The books of the Old Testament, showing their positions in both the Tanakh (Hebrew Bible, shown with their names in Hebrew) and Christian Bibles. The Deuterocanon or Apocrypha are colored differently from the Protocanon (the Hebrew Bible books considered canonical by all).